It's been a little while since we had a happy hour 'round these parts, so the gang and I wanted to bring you back up to date with what's been happening around the interwebs and the sporting world in general. So sit back, grab a frosty one, and enjoy what's

Women's Softball Continues Kicking Butt Taking Names: Memorial Day weekend provided the Michigan Women's Softball team with a memorable Super Regional victory over the Baylor Bears. Memorable in the sense that Michigan is headed back to the College World Series, but also memorable in the sense that good holy lord did they kick the ever living crap out of their opponents. Michigan throttled Baylor, taking both games by a combined 15-2 score. It's even more impressive when you consider that every Michigan Softball class since 1991 has appeared in the College World Series. Think about that. Gary Moeller was still coaching Michigan at that point. Hat's off to you, ladies. Job well done. 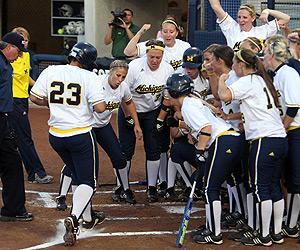 But there's business at hand. Fifth ranked Michigan draws fourth ranked Alabama in the CWS. First pitch is at 9pm EST on Friday. Alabama has had an amazing year, going 52-9 compared to Michigan's equally impressive 46-10.  Expect to see either Kelsi Dunne (26-3) or Charlotte Morgan (17-6) on the hill for 'Bama. I expect Michigan will see Dunne. You gotta ride your horse, and Dunne's 1.40 ERA and measily .170 OBA says she'll see the bulk of the duty in Oklahoma City. Morgan's a fine pitcher in her own right but her .221 OBA leads me to think she's not quite in the same class of pitcher as Dunne. Bama's complete stats can be found m'ere.

For Michigan, the Wolverines will ride Nikki Nemitz as far as she can take them. Nikki was an improbable 26-5 with an 0.89 ERA. Most impressivley, she went 14-0 with a 0.77 ERA during the epic 24-1 run the Wolverines went on earlier this year. But don't start to think the Wolverines are a one-pitcher-pony. Far from it. While Nemitz is 15-0 with 0.78 ERA during the last 27 games, her co-ace Jordan Taylor went 11-1 with a 1.33 ERA. You might say, as the Detroit News did, they're hitting their stride.

If you're looking for some fine Bama related deimentia, check out our buddies over at Roll Bama Roll. Todd, Nico, Kleph and the boys do some fine work. If you're still jonesin', I recommend The 3rd Saturday in Blogtober and our homies at Tide Druid. If you're noticing that there's not a lot outside of RBR and 3SiB, it's because 'Bama's a football school. They'll learn.

Michigan Basketball Readies for Road Trips and a Tough Non-conference Slate: One of the things John Beilein has promised over and over again during his tour of alumni events is that Michigan will player a MUCH tougher non-conference schedule from here out. No more waiting and hoping that people don't devalue your big wins because the pundits say you didn't play anyone. Looking for a prime example? Penn State. Congrats guys, you're number 66! 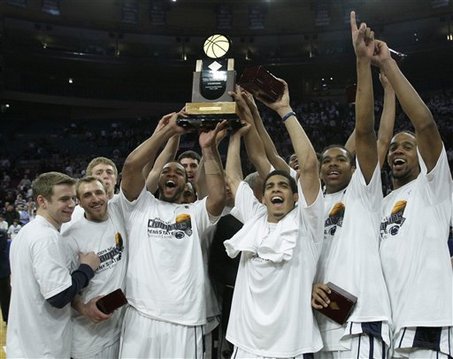 God I'm so happy I can taunt other people about basketball again. Anyway, I digress. Michigan is working to upgrade their competition. With Ben Howland wanting nothing to do with Michigan for the foreseeable future, the Wolverines will travel to Utah as part of their Non-Conference slate. This is no easy trip either, Utah was 13-2 at home last year and made the field of 65. Great work by the basketball program to get this done.

Also of note, Coach Beilein will head the NCAA Basketball Ethic Committee this year. Only good can come of this. Michigan welcomes two new preferred walk-ons. These guys WILL contribute. Mark my words. They both had good offer sheets from MAC teams. They can play.

One Other Basketball Note You Should Pay Attention To: Mark Fox signed on as Georgia's head coach. Fox, formerly of Nevada, is an excellent coach and will bring Georgia's basketball program back from the dead. Mark my words.

Men's Golf in the NCAA Tournament: After a 12 year absence from the Tournament, the men's golf team is back in the NCAA Championships and currently sits 9th out of 30 competing schools, eight strokes behind Oklahoma State and Georgia. The complete leaderboard can by found here. Go Blue!

Michigan Football gets ready for a HUGE Recruiting Weekend: It's that time again, recruiting time. The Football team will welcome just about everyone on it's recruiting radar to the annual BBQ at the Big House. The idea is recruits and their families are able to join Michigan coaches and staff for an afternoon grilling out and getting to know one another. Got questions about S&C? Barwis will be there to do two finger push-ups for you then bend iron rods into pretty butterflies for the recruit's 12 year old sisters. Several high profile recruits around the country are scheduled to attend. Importantly, in state DE phenom Will Ghoston is scheduled to attend.

But it's not just hot dogs and hand shakes for the coaching staff. Michigan's summer football camps are gearing up as well. The big recruiting push starts on June 14 and runs through June 17. The June 14 camp is one of Michigan's best chances to eyeball incoming and potential recruits in game like situations.  On the flip side it also gives these recruits a chance to check out Ann Arbor and evaluate whether Michigan is righ tfor them.  Immediately following that camp will be a  7-on-7 passing camp and offensive-defensive linemen camp running from June 18-19. Finally, the staff ratchets is back a notch for the June 21-23 youth camp.

Of note - Michigan has granted preferred walk-on status to Michigan track team enrollee Joe Reynolds. Reynolds is blazingly fast, and Men's track coach Fred LaPlante's generous offer to show Reynolds' football tape to Rodriguez has given the young man the chance to not only run track for the Maize and Blue, but suit up in the winged helmet. Best of Luck Joe!

Stuff around the Sphere Worth noting:

Varsity Blue is previewing Michigan's upcoming opponents in Phil Steele like fashion. Giving you way too much information way too early. Here is Eastern Michigan, Notre Dame, and Western Michigan.

Speaking of Phil Steele, his previews are coming fast and furious. He's counting down the top 40 teams for 2009. Hint, we're not in that countdown.

Athlon's doing it to. But seriously, Penn State at 7? Soft slate or not, no line on either side is tough to overcome with no receivers to throw to.

This is just awesome.

File this under "Duh!": Ohio State leads Big Ten in recruiting violations. Wait. That's it? Dammit... That's nothing. (see below)

BHGP is not happy. They have a right to be annoyed. Behold.

Kyle of Dawg Sports takes on Urban Meyer's "You're with us or against us" menality in the eloquent manner that only Kyle can provide.

Big guy schedules little guy. Little guy chooses to blow off conference game for the money. Explain to me why the photo of the Big House is relevant to your story if all you're doing is taking administrators to task?