When a Story's Not a Story

Share All sharing options for: When a Story's Not a Story

It's been a whirlwind recently in my personal life, which has led to me not really doing all the reading I should do if I'm going to, you know, run a blog about Michigan football.  So I'm catching up on headlines when I ran across this gem: 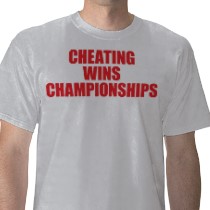 When you can't beat somebody on the field, you resort to taking pleasure in inane recruiting violations.  See - it's clear!  OSU's been cheating this entire time!  Boldly, I plunged forward into the article, expecting devilish tales of Tressel making it rain on recruits while pit-bulls fought in the corner all under the purple glow of a black light and a lava lamp.  Upon reading it, I got more excited.  Look at the spin on this baby:

(Ohio State director of compliance Doug) Archie said ... the committee and the athletic department, "consider (it) a very healthy number. We have a very robust compliance office and our coaches are encouraged to report any violations." ...

OSU's 13 recruiting violations were the most in the Big Ten. The league's schools reported 21 in all.

Archie said he felt that was due in part to OSU's aggressiveness in asking its coaches to report everything, and also the size of the Buckeyes' department (36 sports, compared to less than 20 at some league schools).

Ohhhhh, I get it.  You're just extra careful in policing yourselves and that's why your school accounts for 62% of all the Big Ten's recruiting violations for an entire year ('07-'08).  My excitement grew.  Oh how I was going to make those message board idiots pay.  I was headed straight to bucknuts to gloat on my new found moral superiority.

Alas!  I remembered my liberal arts education; my history degree.  I remembered that newspapers, although very close to the source, were not actually considered primary sources and to get to the real news, it was best to check out the actual report.  Here's what I found:

Holy hell, these are violations?  How the heck would anybody be able to keep these things straight, much less police them?  I can say with absolute certainty that I probably break 10 to 15 of these puppies in my everyday life, and I'm not affiliated with any university!  Whoops, I stayed up until 3AM last night playing "modern warfare" (I'm that cool).  Violation.  I went to a meeting with a guy in Indianapolis, and another guy walked into the room.  Violation. I played in a men's basketball rec league, and it wasn't basketball season.  Violation.

Now what am I going to go to bucknuts with?  Thanks for nothing, Freep.  Seriously though, when it's easy to read the report and realize that, uh, these are nothing, then why run the article that way?  Stupid newspapers.