Share All sharing options for: Thursday Happy Hour Honors University of Michigan All Americans, Can't wait for SEC! The Movie!, Loves Photoshop and Wonders Why Everyone's Throwing Tim Floyd Under a Bus

University of Michigan sophomore golfers Lion Kim and Alexander Sitompul were honored Tuesday as Division I PING All-America honorable mention by the Golf Coaches Association of America. They're the first Wolverines to be named to an NCAA All-America team in almost 40 years. HT: MLive.com

Heisman Pundit picks Tate Forcier and Fitzgerald Toussaint to be two of just 18 standout freshmen for 2009. Definitely worth a read.

Rivals starts it annual Position Preview, beginning with the Defensive Line. The Wolverine gives a round down of what we can expect out of the defensive line this season. One caveat thought, Brandon Herron and Marrel Evans are not slated for the spinner position. My understanding is Stevie Brown will take most of those snaps with Evans maybe  backing him up. Anyone else heard anything on this?

Technically this isn't Michigan Football, but I had to put this at the top. Our friends at SpartyMSU have gone a little off the deep end in predicting a successful season. They're predicting a 12-1 finish including a bowl win. Ahem..... 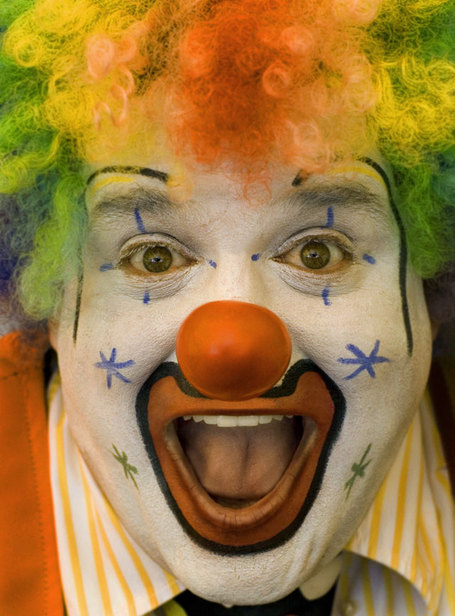 HAHAHAHAHAHAHAHAHAHAHAHA Yeah. That will never happen. Unfortunately, based on their schedule a 3-1 non conference record isn't out of the question. Matched with rebuilding at UW, Illinois, Purdue, and Michigan, four wins in conference seems like almost a guarantee. But I think PSU and Iowa are losses. Minnesota, Northwestern and Michigan are 50% at best and Minnesota's going to be really good this year. I've got them in that 9-4 to 7-6 range, they'll get to a bowl, maybe even a new years bowl, but with a new QB, no Ringer, and questions on the line, double digit wins just ain't going to happen. But go there, take a look at their projections, and make your own judgments.

I don't care whether Lane Kiffin can succeed at Tennesssee, I just had to link this photo. 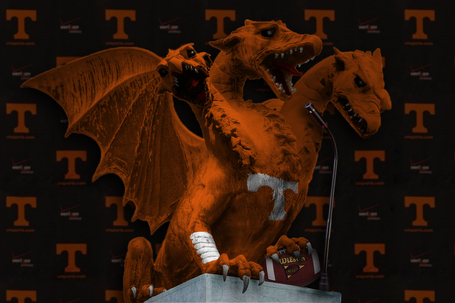 "We know that's Lane in the middle because his mouth is open in front of a microphone." - Rocky Top Talk

The Rivalry, Esq. has been on fire lately, pumping out great content. One of the best things yet is their recent write up on Penn State. If you're a Big Ten fan this is a must read, and a reminder of just how bad things can get when you're replacing your offenisive lines but retain a handful of play makers to fool the pollsters. Most Pre-Season polls are showing Penn State as a Top 15 team. They're wrong, and here's why. Outstanding work. Even Dr. Saturday agrees! Before I forget, best of luck to Graham Filler over at the Rivalry who will be taking the bar exam in a week. Best of luck buddy. We all know you'll pass without breaking a sweat.

Another SB Nation site that's been knocking them dead is Tomahawk Nation, who gave us their zone running explanation on Monday. Well, they're back at it with "For Entertainment Purposes Only 2009": Florida State is the Atlantic Favorite, but the Value Lies with Clemson. You simply will not find a better break down of the ACC, anywhere.

Florida 24 - Loser with Socks catalogues all 24 arrests at Florida this offseason. One word: Daaaaaaaaaaaaaaaaaammmmmmn!

Boiled Sports: Purdue Football 2009 Billboards: I had a little fun with this. Photoshop contest.... Go!

NCAA brings the foam hammer down on Alabama. Thanks to the "text book scandal," Alabama will forfeit at least 10 wins from 2005-2007. Final judgment hasn't been released, but I believe I speak for all non-SEC fans when I say "Yawn." Reaction over at Roll Bama Roll is a little more pointed.

The Fall Guy: Tim Floyd calls it quits.  A Sea of Blue asks the question "Who is to Blame for Cheating?" They also go a step further and speak out against the cult of Victimhood.

The one thing that's bugged me the most about the whole tim Floyd thing is the fact that everyone, I mean everyone, has presumed that Floyd actually gave $1000 cash to one of Mayo's runners. How fucking stupid is that? And why is it that only Doug Gottlieb is asking about another way to look at the USC situation, by saying what if we're wrong. What if Floyd is innocent of these accusations? The Media has gone a long way to trash Floyd on the basis of a felon's contradictory statements, not testimony, not sworn oath, but statements given at different times to different people with different "facts." This whole thing reeks of bullshit to me. The media's rush to find USC guilty of something becuase they still, after five years, can't pin the Reggie Bush scandal on anyone, reeks of a vendetta or at best lazy, lazy, lazy journalism. I'm stewing on a long post/thrashing of the parties involved, but I want to make sure I've got all the facts. More later. I know these are not fun times for our buddies at Conquest Chronicles, but chin up guys. Just remember the golden rule, do not hire Brian Elerbe.

Padres draft Michigan pitcher Chris Fetter - Chris Fetter went in the ninth round of the MLB Draft to the Padres, No. 264 overall. Good luck Chris, we're all pullin' for you.

Black Shoe Diaries takes a look at college lacrosse, Michigan, and the problems with trying to bring lacrosse to the Midwest. Even if you're not a lacrosse fan, this is just interesting stuff and good writing. Link - Oh PR, You Fill Our Hearts With False Hope