Maize n' Brew mercilessly drifts through yet another preview; this one long overdue.  Ladies and Gentlemen, the Iowa Hawkeyes.

The Hawkeyes finished last season with a bang, beating Steve Spurrier's South Carolina Gamecocks in the Outback Bowl 31-10 (of the SEC, no less!).  As damn near the only Big Ten team to have anything approaching a resounding bowl victory, Hawkeye fans come into this season with super-high expectations, especially given the effusive praise the defense has received this off season.  Of the teams that SCM, MnB Dave, and I have had "roundtable-like-substance" discussions about, Iowa was among the most divergent in opinion, with SCM checking in as "not too concerned" about the Iowa game, and MnB Dave stating it would be the toughest road test of the season.  I landed in the middle.  On the administrative side, Kirk Ferentz recently signed a 7-year 21-million dollar contract extension.  This figures to keep him in Iowa for a long time; he is already the second longest tenured head coach in the Big Ten.

A "meh-ish" OOC slate, followed by the typical Big Ten fare.  I will point out that Iowa has a brutal road schedule this year, traveling to Penn State, Michigan State, and Ohio State - all of which figure to be angling for a New Years Day bowl.

One thing the media will harp on that is off base:

With the early departure of Shonn Greene, destroyer of defenses; worlds, to the NFL, people have been focusing on Jewel Hampton and Jeff Brinson as the flag carriers for the Hawkeye running game that was so effective last year (26th in the nation).  What might matter more is the development of the interior offensive line who must find replacements at Center and Guard respectively.  New starters-ish (see below) Rafael Eubanks and Dace Richardson look to step into the starting roles.  Eubanks is certainly no slouch, a 4-star to Scout who competed for the starting position last year with departed senior Rob Bruggeman.  Eubanks had started at Center as a Freshman and a Sophomore before Bruggeman ultimately won the job last year.  However, Eubanks should do just fine in the middle.  Dace Richardson looks to get the start at Right Guard.  Dan Doering was named a starter last year until injury side-tracked much of the season.  A 5-star all-world recruit in 2005 with offers from Oklahoma, Notre Dame, Tennessee, and anywhere else he mentioned as possibly having a shot, Iowa is downright USC-esque with their offensive line replacements.  Lose a starter?  Plug in another top-100 recruit.  Richardson is another 5-star recruit.  All have seen significant time in back-up rolls or, in Eubanks case, as a former starter, so it's not as if they're true freshman or anything. 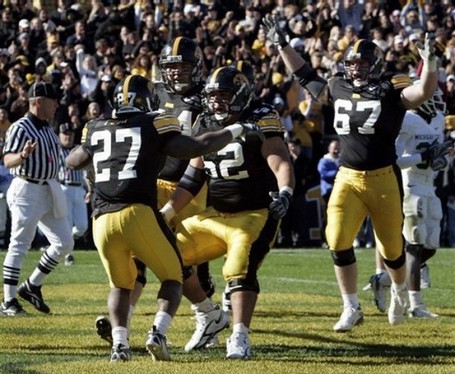 The line looks like this, where ** denotes returning starter:

This offensive line has the potential to shove Iowa towards yet another stellar rushing year, regardless of Shonn Greene's departure.

One thing the media will completely ignore that is integral to this team's success:

While focusing, and deservedly so, on Iowa's stellar trio of linebackers, people are forgetting that they must replace the 95 combined starts of the ferocious defensive tackle duo of Mitch King and Matt Kroul.  That Mitch King guy?  Yeah, he was an All American.  Kroul was a second-team All-Big-Ten selection last year as well.  Replacing those bodies isn't going to be easy, and may put an additional strain on the linebacking corp that is expected to carry this defense.  Another thing worth mentioning, courtesy of a discussion with OPS, is the fact that new Cornerback Shaun Prater is suspended for two games, and his backup Jordan Bernstine seems not to be able to stay healthy.  A situation worth watching.

Most important contributors on each side of the ball:

Offensively, and I hate to pound this into the ground, but this is going to be the offensive line unit as a whole.  Ricky Stanzi was good and effective when he could turn and hand the ball to Shonn Greene only throwing when necessary.  Granted, he engineered the drive that ended Penn State's national title run, but I just wonder how he will fare if the running game isn't as dominant as it was last year.  If the offensive line is as good as it looks on paper, we may not have to find out, which is good for the Hawkeyes, and bad for everyone they play. 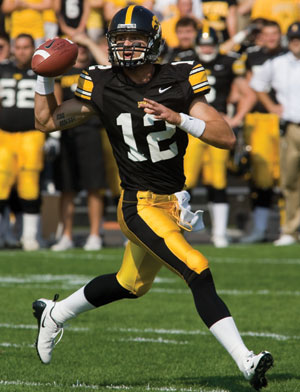 Defensively, it's got to be Pat Angerer, the senior outside linebacker and All-Big-Ten selection from 2008.  He is undoubtedly the leader of this defense, and with the departure of King and Kroul, will be asked to step up even further this year.  A good season this year virtually guarantees a first-round selection come the 2010 NFL draft.

Area that scares you as Michigan Wolverines:

How about that defense?  The unit ranked 5th in scoring defense last year in the country and returns all but three starters.  The loss of King and Kroul hurts, but jeeeeeezus thats a talented, experienced group.

Area that makes you salivate as the Michigan Wolverines:

The strategy here, having not seen any games, seems to me to be stop the running game and let Stanzi beat you with his arm.  While the line and the running backs have potential to be very very good, it still remains only potential.  If there is a trouble spot on this team, it's the fact that if the running game isn't working, Stanzi remains a wild Stanzi-ball throwing wildcard.

Random factor that you think will come into play this season:

As always, the BHGP tailgate scares the shit out of me in only the way a few guys standing around a 2006 Hyundai in a gravel parking lot drinking beer can.  Oops Pow; this is my serious face.

Another New Years Day bowl, movin' on up to the Capital One to beat the shit out of another unwitting SEC team.