Big Ten Media Days, The Take Away on Michigan Football: Part IV - Coaches and the Media

Share All sharing options for: Big Ten Media Days, The Take Away on Michigan Football: Part IV - Coaches and the Media

It's Friday so things are going to be a little more informal today. On Monday look for my wrap up of my morning following Rich Rodriguez throughout the Big Ten Media Kick Off. But for now, we're going to take a short look at the rest of the Big Ten Coaches and some of the assembled media who attended the Conference.

By far, the most entertaining moments of the BTMKO came from Northwestern Head Coach Pat Fitzgerald's opening statements and subsequent Q & A. Fitz seems to be one of those rare coaches who is supremely comfortable when he's barking out assignments during a game as well as when fending off the media jackals. It's a rare gift. He answers questions completely, susinctly, and politely. No matter how bleeping stupid the question is. But he is, at his heart, a football coach. How else can you explain the fact that every word ending in "all" is pronounced "aaawwwwwwww"? The southside drawl on a northside Coach, at least to me as a Chicagoan, is the ultimate dichotomy, but somehow he makes it work.

How could you not want to play for a coach who's very first sentence of his opening statement concludes with "I voted for Tebow"? Fitz has his finger on the pulse of College Football. He's quick too. When asked if he "splurged on anything" after signing his new contract at Northwestern (that actually should outlast the Sun); Fitz told the dumbass reporter who asked it, that he got a couple of wiffle balls for his sons and played in the back yard. That's it. Sure, the question was a trap question, but Fitz disarmed it in a manner you wouldn't expect from a 33 year-old only in his third year as a head coach.

What's most troubling to me as a Michigan fan is that it's readily apparent he gets the recruiting game. When talking about his Northwestern teams and their relationship to today's squad, Fitz referred to beating the "team in south bend" as an important win. You have no name Notre Dame. Fitz has taken it from you. I think he also realizes that the only way Northwestern can be competitive in the Big Ten is to secure its borders within the Chicago city limits and suburbs. Face it, if you're a southside kid, Notre Dame's influence is everywhere. But Fitz is recruiting these areas heavily. Getting involved. Reminding players you can play close to home, get an education from the Midwest's elite academic institution, and compete for a Big Ten Championship, all while still living in Chicago. I know this makes little sense to someone not from Chicago, but Chicago pride runs deeper than you'd think. Fitz gets that. And if he starts to lock down the 3 - 4 star talent in Chicago, we're all screwed.

He's got the energy, the enthusiasm and the skill to be a tremendous coach. When you walk into a conference with a high respect for a man, and then walk out with it even higher, well, it leaves an impression. I'm on record saying I believe Fitz will stay at Northwestern his entire career. He understands the Northwestern mentality. He understands how that system works. But he also knows how to blend Northwestern and college football into a strong and growing program. If anything, Fitz seems dead set on destroying the conceit that smart kids can't pay football. He's got two trips to the Rose Bowl to show otherwise. Northwestern may not have the storied history of a Michigan, an Ohio State, or some team in South Bend. But it does have a talented, personable coach who is going to make football and recruiting life a nightmare for the rest of the Big Ten.

Congrats Coach Fitz, you are: 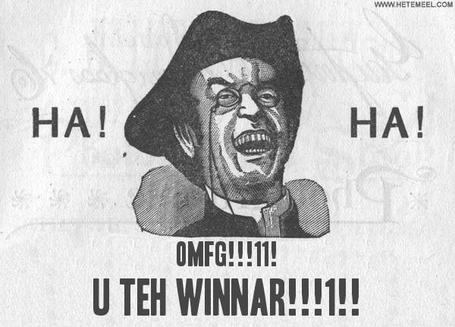 GUY THAT WAS WAY TOO EXCITED! WOO! COFFEE! WIN!

I thought Tim Brewster was going to be the most entertaining coach at the conference. Much like Lane Kiffin in Tennessee, Brewster has that certain je ne c'est quoi that gives him an almost cartoonish stature. He's excited!!! He loves being a Gopher!!! Tremendous!!!!!!!! Win!!1!

But at the BTMKO, he was surprisingly subdued. Sure he used "Tremendous" seven times in his 15 minutes. But other than calling for a 12th team and a conference championship he didn't really say anything that made you wonder if he'd been huffing paint thinner before stepping on the stage. So, no. Brewster wasn't the man I thought he'd be. And for that I am sad.

Thank God we had Bill Lynch from Indiana there. Holy crap was he entertaining. I can't emphasize how surprised I was by Lynch. He is like Ed Ogeron and Bobby Johnson had a love child. HE IS SO EXCITED ABOUT INDIANA FOOTBALL. I WENT AROUND TO THE FRATERNITIES AND SORORITIES TO TALK FOOTBALL. GET THEM PUMPED! HOOSIER BALL! WE'VE GOT A ROCK! DEFEND THAT ROCK!

Good christ in heaven, he was awesome. No one. I repeat, no one, should ever be that excited about Indiana football. Ever. Everything is coach speak, but EXCITING COACH SPEAK. "As a football coach you love coaching football." Also "College football is different than the NFL because you don't have free agency." It was all gold. Gold Jerry. Gold. Much like the non-presser version of Brewster, Lynch has his catchword. "Multiple." He loves that word. "We're going to be multiple this year on offense." Any time he could use "multiple" he did.

In all fairness, the guy is coaching Football at Indiana. He has to do this stuff or no one's going to come to the games. So, he's coming up with every gimmick he can think of to get players to Indiana and to get people to come to the games. Whether it's running the Pistol, going to sorority and fraternity houses to convince them to show up (for once), or just TALKING REALLY LOUD, Lynch is going to get you to CARE ABOUT INDIANA FOOTBALL. I get that he's got a sales job to do, but he's coming off as a used car salesman. Which, if Indiana doesn't show at least some signs of improvement in the next few years, he may end up doing. 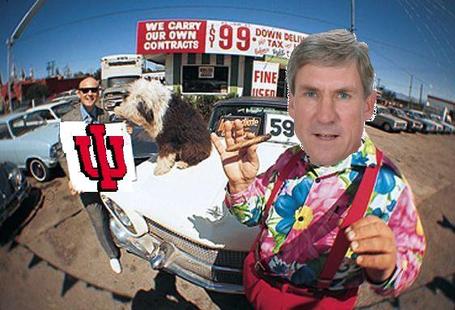 Morning of the Living Dead Coaches

If you can find three more boring, lifeless coaches that Tressel, Dantonio, or Ferentz, then you've probably dug up Woody Hayes corpse and propped him up Weekend at Bernie's style in front of a microphone. Frankly, he would've given been quotes to the media.

No one on this earth, and I include Bill Clinton in this, can have more words flow from his mouth without ever actually saying anything than Jim Tressel. He is the King of the un-quote. You can sit there and actually have questions on paper and in your mind disappear before your eyes and ears into the blackhole that his a Tressel Press Conference. Stunning really. You will get nothing. And like it.

His own personal mini-me in Mark Dantonio is largely the same. But he hasn't quite mastered the black art yet. At one point he did actually make his displeasure with a question show. Specifically when responding to an idiotic question about MSU running the option this season. While his response was "that was taken out of context, we don't have the personnel to run it, don't want to run it, etc..." you could see in his eyes and reaction that what he wanted to say was "That's the stupidest ----ing question I've ever been asked you ----ing tard. I'll rip your still beating heart from your chest and show it to you before all the blood drains from your brain." He just not there yet.

Tressel can be asked "I hear you molest donkeys, care to comment?" and respond with "Well, our players are working harder than they've ever worked. We're going to have some great competition at those positions. I think some freshmen are going to surprise you this season or next. We'll see what happens." Dantonio hasn't reached that level of control.But he will. My young apprentice.

Why is Ferentz in this group? Because he said nothing. Nothing. Nothing. Yet was up there for 15 minutes. He may not be Tressel. But damn he's close to it when a microphone is on. I'm convinced he actually slows his heart rate to about 23 beats per minute when the cameras go on.

Sorta. Ron Zook was surprisingly tame. I couldn't tell if he was sick or just winded from a night out, but he was fairly subdued.

Joe Pa. Awesome as you think?

Oh hellz yes. He's just what you think. Sharp as a tack. Quick on his feet. Handles the press like they're grandkids. Responds to stupid questions with a smile. Loves to talk football, but is just as happy ignoring you.

When asked "what keeps you coming back?" Paterno replied, "I'd miss you guys" He's still the King.

So What About the Assembled Media?

Everyone was surprisingly cool. To be honest, I expected a little bit of pushback from the more established journalist, but the prejudice on my part was probably more the result of a couple of outliers getting you tubed rather than reality.

The only exception to the "cool media dudes" meme that I'm trumpeting was the doofus from the Columbus dispatch who tried to ask every Big Ten coach during their 15 mimutes about Ohio State. But, well, he's from Columbus. Other than talk Buckeye football and be fat, there's not much to do.

All in all, it was a tremendous experience. Monday I'll have the final wrap up for Rodriguez comments which, due to the length of the tape I recorded, is taking a little while. There isn't an overarching theme to my experience as a newbie among the credentialed media. It was largely what I expected. But in some ways it was a little bit more. My thanks to Sports Blog Nation, the Big Ten, and the Michigan Athletic Department for letting me through the gates.