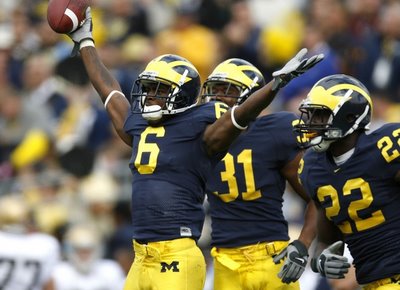 Over the past several weeks I've had two types of thoughts regarding our secondary: "our starters at the corners should be solid" and "holy @#%@# who's going to play safety and we can't even spell depth".  Such are the vascillations of a cautiously excited/nervous fan, yay college football indeed.

For those of you that haven't yet read The Obscene Diaries of a Michigan Fan by Craig Ross, consider this your recommendation of the day.  The genesis of this post comes from his examination on the difference between interceptions and fumbles, "are all turnovers created equal?" in which he examined 113 Michigan games:

Michigan record when even fumbles and more interceptions: 1-8 (11.1%)

Michigan record when even interceptions and more fumbles: 4-3 (57.1%)

Michigan record when even interceptions and fewer fumbles: 8-3 (72.7%)

For the moment I am left with the conclusion that an interception is a more consequential occurrence than a lost fumble [...]

Thankfully this particular passage was penned well before last year's fumble fest.  In sitting there thinking about such breakdowns, I started to wonder if there was an appreciable difference between teams with defenses that were better at stopping the run vs those that ranked highly against the pass. Stats being stats and all I still found the following somewhat interesting.... with some obvious caveats:

1. Top 25 defenses in either category are, well, top 25 defenses... Michigan's D last year ranked 87th in pass defense and 50th in rush defense, which goes against the "trend" demonstrated here as you'll see in just a second.  This is a complex way of saying, if your defense is all around bad, it doesn't much matter if it is "less bad" against the run.

2.  This is not to suggest that a team can focus soley on one aspect and get away with it.

Seven teams appear on both lists: USC, Tennessee, UConn, TCU, Va Tech, Florida, and Boston College.  Their combined record was 68-25.  So taking out those seven teams leaves the records as thus:

I don't know about you but I'd call that an appreciable difference.  Again I'm not trying to suggest that a team that can get by with a poor secondary, but given the choice of having a lockdown D against the pass or the run, it's apparent that you'd rather be solid against the run.

How does this bare out in the Big 10?  Well the top 4 teams in pass defense last season were as follows: Purdue, Ohio State, Penn State, and Wisconsin.  Rush defense?  Penn State, Iowa, Ohio State, and Northwestern.  Doing the same thing we did with the top 25 D's, remove PSU and OSU and you get a breakdwon of 11-14 vs 18-8.

Should Michigan fans still be concerned about the state of the secondary?  Certainly.  Is it possible that this can still be an effective defense if it is able to excel against the run?  Moreso than I previously thought...