Share All sharing options for: Wait... You Want Them To Do What?

I know this isn't a breaking issue, but there just simply isn't that much else to discuss at the current juncture, and apparently the NCAA and American Football Coaches Association had nothing better to do with their time recently either...

College football teams are planning to start the season off on a courteous note.

As part of a sportsmanship initiative, the American Football Coaches Association and NCAA are encouraging schools to arrange teamwide handshakes on the field before kickoff.

Grant Teaff, executive director of the AFCA and former Baylor coach, says college football players and teams are in a pressure-packed environment and that encouraging respect and sportsmanship is important.

"It is symbolic," Teaff told USA Today. "But it is, we think, a very important initiative."

Shaking.... hands... before the game?   Wait what?  Oh I'm sorry, I thought we were in America, I'm sorry... what is this a communist country or something?  I thought this was America...

You're the best around Randy

Silly me, I forgot that pregame sportsmanship is as old and timeless as the game itself...  Wait, what's that Bob Ufer??  "Here they come: Hare, Middleton, and the Buckeyes... and they're tearing down Michigan's coveted M-Club banner! They will meet a dastardly fate here for that! There isn't a Michigan Man who wouldn't like go out and scalp those Buckeyes right now. They had the audacity, the unmitigated gall, to tear down the coveted M that Michigan's going to run out from under! But the M-men will prevail because they're getting the banner back up again. And here they come! The Maize and Blue! Take it away 105,000 fans!" 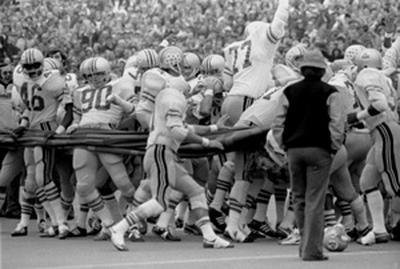 This seems like a great idea... I thought we were playing, you know, FOOTBALL.  Boo handshaking before the game... boo...

Listen, we're all for sportsmanship here at Maize n Brew, trust us, it's an extremely important part of the game of football, but doesn't this just strike everyone as a) forced  and b) completely contrived?  This is, pardon my repetition, FOOTBALL.  Hell, hockey doesn't even have the guys shake hands until after completion of an entire playoff series... let alone before the teams square off.  I mean, could the players parents come out and form a tunnel after the game for both teams to run through before they get some orange slices and juice boxes after the game?  Sportsmanship shouldn't be mandated, it should already be inherent in the game.  The cynical part of me thinks that this initiative is going to have at least one hitch on opening week, I mean honestly, doesn't some think somebody is going to something that someone else is going to react to?  Anyone?

The funny part is the one item they did manage to do right is the one that will likely cause several large debates in the near future: the whole "taunting is now a live ball penalty" which when obvious makes complete sense and when questionable is agonizingly stupid will certainly have us talking at some point this season, I'm certain...  just sayin'.