Wednesday Happy Hour Wishes Corso a Speedy Recovery, Is Now a Student Coach, and Says Even Buckeyes Can Root For Michigan Football This Season

Share All sharing options for: Wednesday Happy Hour Wishes Corso a Speedy Recovery, Is Now a Student Coach, and Says Even Buckeyes Can Root For Michigan Football This Season

Maize n Brew gives you your daily (or semi-daily) rundown of all the Michigan Football, Michigan Basketball, College Football, and College Basketball news you need to get through the tedium of your boring desk job. For good measure we'll throw in a little irreverent information, comedy and commentary to help you salt away the time until the clock strikes 5pm.  Want it in 140 characters or less, follow us on Twitter! Or you can find us on Facebook! Here's what's ON TAP:

Lee Corso Continues His Recovery From His May '09 Stroke; Should Rejoin ESPN Game Day Crew 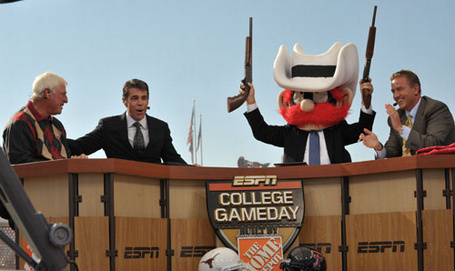 We're big fans of Lee Corso here at Maize n Brew. He cracks us up. Whether it's consistently picking the wrong team on the showcase, fumbling around with a mascot head, or those wonderful signs behind him; we love him. Sure he can get a little annoying. Some of his antics wear thin. But come on, people, the man is entertaining. More importantly he loves college football and has been a wonderful advocate of our fair sport. So when we heard that Corso suffered a minor stroke in May, we were more than a little concerned. Strokes are bad news. Friends and family alike have passed or been totally disabled by them. However, when I saw the transcript of Kirk Herbstreit's conference call courtesy of the Orlando Sentinel's outstanding CFB 365 Blog, it raised my spirits.

Q: Have you seen Lee Corso, and how is he feeling since his stroke?

Herbstriet: I saw Lee in Los Angeles a few weeks ago when we were shooting our College GameDay promo commercials. You know Lee and his energy he still has that same energy and that same passion for the game. It’s a matter for him to get to a point where he can find that comfort zone and be the entertainer we have all come to know and love.

Lee, I'm sure I speak for a legion of college football fans when I wish you a speedy recovery and an even quicker return to the Game Day set. Saturday's wouldn't be the same without you, Coach. Hurry back.

When One Door Closes Another Opens, Cory Zirbel Now An Offensive Line Coach at UM

Give credit where credit is due. Mark Synder of the Detroit Free Press put together a gem of a piece on Corey Zirbel. As you probably remember, Zirbel was battling for a starting position last fall when a knee injury forced him off the field. As it turned out, that knee injury cost him his career as a football player. At that point, the average observer would expect that would be it for Zirbel's affiliation with the Program outside of a reunion every now and then. Instead, Zirbel is now a graduate assistant/student coach for the football team.

As Snyder reports, upon learning his playing career was over Zirbel was immediately offered the opportunity to work with the scout team as an offensive line coach. This year, the coaching staff went one step further and put Zirbel on a medical scholarship and offered him a position as a student coach for the Offensive Line. The results have been great for all involved. Said Zirbel:

"It's an honor. It's Michigan, always going to be Michigan. Coach Rodriguez is a great guy, presented me an opportunity, and I took it."

Man. If this isn't one of the true feel-good stories of Rodriguez tenure, if not the entire college football off season, I don't know what is. Kudos to Mark Snyder for bringing this one out.

A small victory for the people tailgating with me over the forces of evil (Bud Light). The University of Michigan dropped the "we'll sue your ass" hammer on Budweiser after the beer maker announced it's intent to peddle "dark blue and yellow" Bud Light cans as part of its "Team Pride"-"Made for Gameday" promotion this fall. Budweiser's though was simple enough (and correct): it's easier to swindle college football fans out of their money by tacitly implying in their packaging that their beer supports your athletic team. Wooo! Team Pride! Let's drink warm urine because it comes in a can with mi skoooolz colorz! RAWK! Sadly, I fall victim to this every year. RAWK! It happens. My mania on game day tailgates overrides my brain and I will drink a beer that causes me to emanate odors which are reminiscent of low tide at the New Jersey Port Authority. Thankfully, the University has saved me from myself.

A point of note is that Michigan seems to have laid claim to colors. And not just "maize" and "blue". But variations on that theme:

The letter from Pear Sperling Eggan & Daniels, P.C., which represents U-M in trademark matters, said Michigan's "Maize and Blue" colors are part of its national identity, and many fans purchase U-M products under its licensing program.

Fairly bold, but understandable, position. Two colors are a non-infringeable trademark. Not colors in any pattern or portrait. Two colors. Go lawya. Hate on.

I think it's all crap BTW. If it'd been a beer that doesn't taste like pee, there's a chance they'd have looked the other way. IMHO, anyway.

You Can Root For Michigan, tOSU Fan. Really. It's In Your Best Interest!

Note, this article is intended for the more intelligent of the Buckeye faithful. I’m just assuming right out of the gate that the backwoods, mullet-sporting redneck who named his eldest son Herbstreit and his daughter Ihatemaize is not going to get past the title. To be fair, this article will also seem reprehensible to the psychotic Wolverines who name their children Shembechler and Deathtuohessyu.

More on Michigan from Herbie, and Mat Millen?

Matt Millen and Kirk Herbstreit predicted a big improvement for Michigan this year according to the Detroit News.  Not surprisingly, both men pegged the Notre Dame game as a bell weather for both teams. But both also said that the Notre Dame game could be the difference between Two Ton Charlie lasting another year in South Bend or not. According to Herbstriet (via the Free Press)

"The game at Michigan is the all-time swing game. If they win that game, then they go back home against Michigan State with some confidence. If they lose to Michigan on the road, they've got to go back home and all the negativity locally and nationally surrounding the program and Charlie Weis, going up against a team you struggled with for a few years in Michigan State. That (Michigan) game is going to dictate a 10- or 11-win season or a six- or seven-win season [for the Irish]."

Millen was fairly direct on what the critical element will be this year for Michigan:

"There are a lot of things that pave the way for this being a much improved team, but the bottom line in our game of football, regardless of whether it's high school, or college or professional football, it comes down to that guy under center, always has, and it always will," Millen said.

"(Playing all three QBs in the opener is) a good way for Rich to get reps for all three guys, but I will tell you this, if Rich knew right now that he had one, he'd have one. He wouldn't have three. He's still in the process of finding out which guy is going to be the real deal. The biggest thing, you can go into a 107,501, but for some guys the game isn't too big, and some the game's too big, and that's part of what he's going to find out now. I think he knows where they're at from a skill set, now let's see how they can apply it to a game situation."

The Blue-Gray Sky finishes up their Impound It series, which chronicled some of the good and bad plays Notre Dame ran or should've run. The final piece features some creative speculation on their part on five wrinkles that ND might introduce (or re-introduce) to the call sheet.

Will This Be Our Year? - The Rivalry, Esq., tries to give us some answers as to whether the Big Ten will bounce back from two straight years of embarrassing Bowl Seasons. The long and short of it is, don't expect a Big Ten team in the National Championship game for a while. However,

What gives 2009 its true breakthrough potential is that we just might get what we deserve. One team will go to the BCS, and six others will play supporting cast. Instead of looking up, we'll play down -- capitalizing on a favorable slate of matchups.