The Calm Before the College Football Storm

Share All sharing options for: The Calm Before the College Football Storm 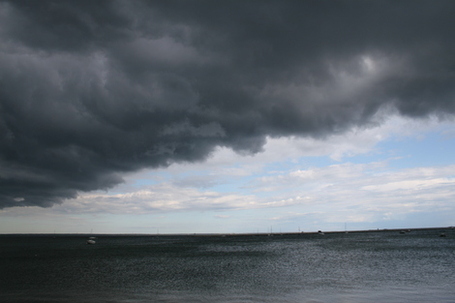 Courtesy of Andrew Sullivan, TheAtlantic.com
For some reason there's an eerie feeling about today. It's the quiet that's getting to me. There's little going on. All we're hearing about is practice, preseason shows, and "watch lists." But we're not hearing about actual football. After three weeks of knocking heads, fans and players alike are ready for the season to begin, but we're still days away. A week ago grainy video of practice drills and daily updates on position battles that won't end until September 5, 2009, would've put me on cloud nine. Now they're taunting me. Reminding me that I've got another week before anything happens. Sure it's just a week, but today it seems like an eternity.
Even so, I can see the college football winds start to shift. Teams are preparing for their week one opponents, but they've only just begun to do so. Athletic Departments are slowly choking off access to practices as their teams switch gears from teaching to preparing. Emails from the athletic departments roll in. Alumni groups start sending out "game watch" announcements. Friends start to call about tailgates. All this is because relevant information on our teams is becoming a little more sparse.
As for the players, there's word across the country of the occasional practice injury, DUI or bar fight, but nothing else. 99.9% are laying low. College football is entering a brief period of lock down. The season is coming. We can see it on the horizon. But today, all is quiet. Fishermen call it the calm before the storm. That quiet period on the edge of a tempest that precedes the holy hell that is about to be unleashed.
Times like these are excruciating. There's little to discuss or do. All you can do is watch the thunderhead in the distance gather size and strength as it approaches, slowly blotting out the sun and casting it's long pall onto the ground before you. Just like a thunderstorm you know it will be on top of you shortly. The noise. The electricity. The spectacle. There's a nervous anticipation coursing through you. Just like the gathering storm, the energy you've stored up is ready to be unleashed. But now it's quiet. There's no where for that energy to go.

So you wait. In eerie silence, watching the storm in the distance and counting off the minutes until is arrives. And when it does, all that energy, its and yours, can finally be released.