Maize Out? Why Not Have a "Loud Out"?

Share All sharing options for: Maize Out? Why Not Have a "Loud Out"?

OK, I'm going to say it: I don't like "Maize Outs". Phew, that feels better. I'm sorry, it's just an annoying concept. The student section looks great when it stands apart from the crowd... hence the student shirts. It really does look awesome when nearly 20% of the stadium is one big block of unity. It also doesn't hurt that this is the most vocal and active portion of the stadium either.

The problem comes when you try to spread that to the rest of the stadium. First off, it simply doesn't work, not everyone actually has or wants to wear a piece of Maize Michigan regalia (believe it or not), and so what ends up happening is you have the student section looking great, and then the rest of the stadium looks as though someone sneezed maize all over the place (the color not the corn). Don't believe me? Check the photo. Hardly a sea of Maize. The student section looks great as per usual, and the rest of the stadium... well eh. Sure, I know I'm coming off as a grinch here, but I just think we could focus on something more important than the whole "color coordination" thing as a crowd.

C'mon folks, Leaders and Best here, we shouldn't be copying Penn State, I mean think about that, copying... Penn State??? What next? Are we going to take some god-awful 80s dance song and start playing it ad nauseum during the game? No thanks. It's overplayed, it's trite, it's cliche at this point. I don't need a color commandment on the ticket to let me know it's a big game, we're MICHIGAN for crying out loud, I think we've got a pretty good handle on it. Why not put a more concerted effort into making the stadium louder from the crowd participation level? The title is only half-in-jest, perhaps we could have a "Don't Yell At Fellow Fans To Sit Down On 3rd Downs And Other Important Plays Out"... of course that probably wouldn't fit on the ticket. 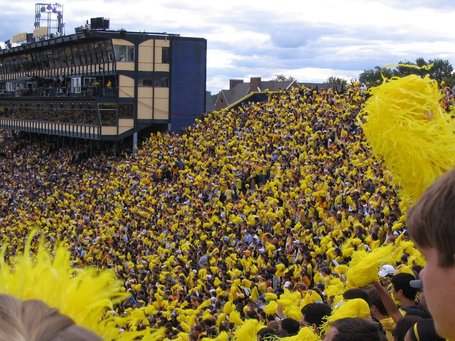 Various approaches have been tried to improve the visual appearance of the Maize Out: maize pom-poms, maize towels, they even were giving away maize shirts for the Wisconsin game last year (by far the best idea if this concept is actually going to work and something that I'm fairly certain the local apparel vendors LOATHE), but without fail every time you end up with this random splattering of maize throughout the stadium. If we were truly going to go with this whole color coordinated approach, then why not have the students do their normal thing and have the rest of the crowd wear blue? You know, the color of apparel that every single fan that walks through the gates owns? Why not give that a whirl? But even that is too much, listen, I know I'm coming off as a curmudgeon here, but I think we could be using our energy more effectively. Push the atmosphere, not the apparel. Somehow we all managed to get along fine before there were even such things as student shirts right? Wear what you want, just get up and get loud, and of course GO BLUE!