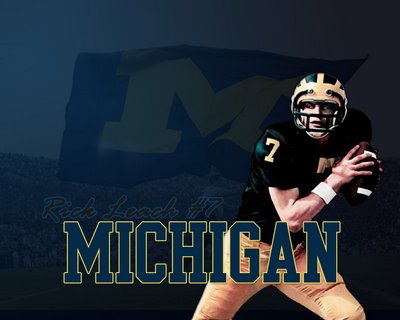 Hard to believe, or maybe not so hard to believe depending on your view point, but Michigan had started a season with a true freshman under center only twice in its history prior to Tate Forcier's first snap against Western. That's a lot of football to consider. Now one good reason for this was way back in the day, Colleges and Universities actually had JV and Freshman teams, just like in large high schools through out the country. It was considered unseemly to have a young freshman compete against the older boys. Dagnabbit, he was likely to get hisself killed!

Around the forties and fifties JV and Freshman squads started going the way of the dinosaur (mostly due to WWII), and you started to see the modern, single University team. That posed another issue. Large schools with football histories started stockpiling all the best talent. There weren't scholarship limits, practice limits, etc... to keep these sorts of things under control. Frankly you probably could've fielded two or three championship caliber teams out of Alabama's practice squads in the 50's and 60's. The same could probably be said of Michigan, Ohio State, Texas, et al.

So the presence of a true freshman under center is a rather recent trend in college football. It's also something that's become more common with scholarship restrictions, national television, and schools being willing to foot the bill for a football program in exchange for the exposure it brings. What that means at places like Michigan and Bama and Texas is that there are fewer blue chip players willing to sit behind another blue chip player when they could be starting elsewhere (the exception, of course, is modern day USC. Bastards.).

Even so, major programs still managed to bring in two to three good quarterbacks into their programs to compete for the job. Usually they were staggered years, and this allowed the coaching staff to "groom" a player to take over. Case and point would've have been Matt Gutierrez, brought in to replace Navarre he was scheduled to guide the ship until he graduated and Chad Henne took over that assignment. But things don't always work out that way. In Rick Leach's case, he was the best quarterback at Michigan in his 1975 freshman season. It's not supposed to work that way. Big school's have depth, they don't need freshmen to step in. And in 1975 returning senior Mark Elzinga was supposed to take over. Didn't work out that way. Leach simply exceeded Elzinga is every category and earned the nod. In Henne's case, he got the nod over Gutierrez, not because he won the starting job, but because Gutierrez ended up having season ending surgery on his throwing arm!

(Stats and more after the Jump...)

This, of course, brings us to Tate Forcier and Denard Robinson, or Tatenard Robincier as they will henceforth be known. Since this is a discussion of starters, I'll leave Denard's stats out of the initial discussion, but throw them in for fun at the end. Tate's situation is analogous with Leach's rather than Henne's. In Henne's case, Gutierrez was the unquestioned starter prior to the first snap. He was a highly rated QB out of high school at California's Mater De high school and never lost a high school game. He was supposed to be the next great Michigan QB. In Tate and Leach's case, both came into scenarios where there was an incumbent, but underwhelming (very underwhelming), upperclassman marginally at the helm of the offense. In both cases, the freshman was immediately physically better than the incumbent and substantially more capable to run the offense.

Just like Leach, Forcier was called upon to use his legs to gain ground for the Wolverines. However unlike Leach, Forcier could throw the ball competently. In Henne's case, he wasn't a scrambler. Frankly, he moved like an oak tree and seemed to suffer the same amount of damage when taken down. The numbers comparison is pretty interesting though. Leach started at Wisconsin, making his debut even more amazing. Henne welcomed Miami (OH) to the Big House. And Tate, well, you know already, Western Michigan.

Here are the numbers

There are all kinds of caveats to these numbers, but they're fun to look at anyway. Leach clearly went up against the toughest opponent in the toughest environment, and his numbers bare that out. Henne had a cupcake game at home with a loaded junior and senior laden team (and Braylon). His numbers bare that out, as does his reputation for being blessed with concrete feet with those two sacks and a pick. Forcier's somewhere in the middle. There are plenty of starters returning, but the 2009 squad is really, really young. Especially at the skill positions. Leach's team was ranked #2 in the country in his first game. Henne's was ranked 7 and 8 depending on the poll.

Forcier's team, notsomuch. Unranked. Predicted to go between 5-7 and 8-4. Coming off the worst season in history. Dissent. Investigations. Cats and Dogs. Living together. Mass hysteria!

Enough! I get the point.

The following numbers are meaningless, but they make me feel a little more comfortable about the coming season. Rick Leach's team finished the season 8-2-2 (7-1), getting hosed in the Orange Bowl when the officials looked the other way as Oklahoma's defense knocked Leach unconscious with an forearm to his head on a scramble. Henne's squad finished 9-3 (7-1), including a loss in the greatest Rose Bowl game ever played to Vince Young and Texas.

Forcier's season is just beginning, and the next step is against Notre Dame. But when a freshman steps in, and eclipses the numbers of two of Michigan's greatest quarterbacks, you have to be excited about his future and the future of Michigan's 2009 squad.