A Concise History of the Notre Dame vs. Michigan Rivalry, and Why Notre Dame Sucks So Much

Share All sharing options for: A Concise History of the Notre Dame vs. Michigan Rivalry, and Why Notre Dame Sucks So Much

Notre Dame has sucked, in various degrees, since 1887 when they first played Michigan and suffered what I'm sure was a humiliating 8-0 loss.  They would continue to lose to Michigan until 1909 when finally a combination of poor ref'ing and an oddly crowned field led to a Notre Dame victory by the score of 11-3.  So atrocious was the refereeing, Michigan declined to play Notre Dame again for 33 years.  Indeed, Michigan would not sully their good name and reputation by playing a bunch of misfits and delinquents in South Bend.  The Irish managed to convince other less reputable teams to play them, and by virtue on not having Michigan on their schedule, started to amass a very impressive winning record.  Finally, in 1942, Michigan put then #1 Notre Dame back on the schedule, and beat the hell out of them in South Bend just to prove they still could.  Nevermind that Notre Dame returned the favor, beating #1 Michigan the year following.

In 1947, both Notre Dame and Michigan fielded undefeated teams that traded spots at the top of the AP poll for the majority of the season.  Notre Dame, by virtue of non-conference cowardice, did not play a bowl game that year, while Michigan went out to Pasadena and thumped #8 USC by 49-0.  However, as was the custom, the AP title was given out before the bowl games, and the press had already awarded the trophy to Notre Dame.  In a poll conducted after the bowl games, the writers decided to reverse that decision and give the title to Michigan citing a better offense and the shellacking of USC.  Notre Dame, being the cheating, lying, sacks of suck that they are, still has the AP trophy from that season and sites that year as a National Championship year despite the second, more accurate poll.

Despite the fact that this rivalry has taken many multi-decade hiatuses, it remains fierce.  The two teams have signed an extension that will keep them playing each year until 2031, or the sun finally goes out and the Earth is reduced to an orb of ice to be discovered and excavated by future space-traveling sentient beings.  Whichever comes first.  In recent years, Notre Dame - still cowardly clinging to "Independent" status - has amassed several winning seasons by scheduling such college football luminaries as Army, Navy, Coast Guard, Sister Gracie's School for the Blind and Deaf, and USC.  They continue to lose to USC, which should tell them something about their ability to play against real BCS opponents but apparently doesn't.  Current head coach and destroyer of buffets Charlie Weis's biggest victory to date remains a 3 point loss to USC.  Similarly to the rivalry itself, Weis has signed a contract extension that puts him as head coach until the sun burns out despite the fact that Notre Dame just got done being burned by one of those contracts.

In perhaps one of the greatest sports movies of all time, a small Catholic boy named Rudy is depicted as generally being a loser who couldn't get in to Notre Dame in the first place, then being beat up time and time again on the football field after he foolishly attempts to walk on the team.  The film has been lauded as leading the way for the mentally disabled, and Notre Dame continues this proud tradition of allowing functioning retarded football players on the team, as evidenced by this picture: 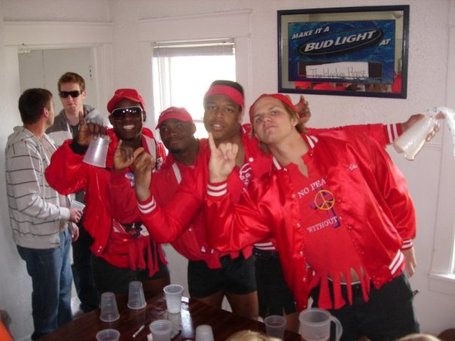 They're so cute when they dress up

This weekend will be the 37th time the two schools meet, with Michigan holding the all-time edge with a 20-15-1 record.  The game will be played in Michigan Stadium at 3:30 PM and can be viewed on ABC.  It is recommended that you tune into the standard-def broadcast, as Charlie Weis's front-butt has been known to literally eat you if viewed in HD. 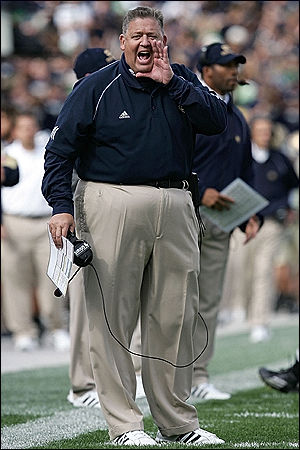