This weekend, Notre Dame plays Michigan.  You may have heard.  Yesterday, I gave you a brief history of the rivalry, which I'm sure has been committed to memory by now.  Today, I give you positional matchups in an attempt to see where this game is going to be won or lost. Let us begin.

Notre Dame returns Jimmah Clausen fresh off completing 105% of his passes (the extra 5% is for love, which Jimmah pours into every pass) for a bazillion TD's against various WAC opponents.  In all seriousness, the dude finally looked like the QB that he was expected to be, albeit against inferior competition.  The third year in any program will do that to a guy.  He's got a solid arm, but a little bit of a gunslinger attitude, throwing 17 INTS compared to 25 TD's.  Like him or not, he's poised to have a big year, and if he can not be such an INT machine, could (gulp...going to do something I've never done before...agree with Lou Holtz) toss his hat in the ring for that ceremony in NYC.

Michigan will start Forcier, and all indications point to him getting the vast majority of snaps with Denard-flashes mixed in accordingly.  I look for Forcier to have a bigger role and a more traditional "starter" presence in this game due to what looks to be superior competition.  Less time to mess around.  I liked Tate's ability to keep plays alive, although I think he pulled it in to run a bit too soon on a few plays. If he continues to not turn the ball over and play smart, I think he'll do fine.  And Denard is always a threat, as evidenced by the broken play magic that I've literally watched on loop 15 times in a row. Still, they are both Freshmen, and therefore not Junior Year former all world recruits.

More after the jump.

Ok, so Notre Dame's got Armando Allen who went for 76 yards against Nevada and didn't need to do much more due to Jimmah's air attack that, again, featured 105% accuracy.  Last season he averaged 4.33 YPC, and the Irish running attack was ranked 44th in the country.  This isn't a run-heavy team, but any coach will tell you that establishing a running game is paramount for the passing game.  If going deep off play action is what ND wants to do, it's going to take a rolling running game to make it work.  Allen isn't going to win this game on his own.

Much like the QB situation, Michigan finds themselves in a "split role" situation with Carlos Brown and Brandon Minor.  It looks like Minor is going to play after being listed as probable.  The Notre Dame D line, to be detailed later, aren't exactly man-beasts up front and could be susceptible to the stylings of MINOR RAGE.  With Brown and Shaw and Leetle Vincent Smith there to bounce it to the outside and provide that spark, the advantage...

Michael Floyd averaged 47.7 yards per reception last game against Nevada.  Golden Tate hauled in 3 catches for 59 yards.  These are some fantastic numbers, but a quick look at the record shows that Nevada also clocked in last year with the 110th ranked pass defense in the country.  So impressive as last game's numbers are, and they are impressive, I'm not sure they hold up against a team with a real-life pass defense.  That being said, Floyd and Tate are both legitimate WR's who are good on the deep ball and have solid hands.  They will present a problem.

Hemingway is listed as doubtful (which provides a lot of literary jokes that I won't make.  Yay liberal arts).  He is Michigan's primary deep threat, based on last game, and will probably be replaced by Darryl Stonum, who has underwhelmed in the Spring.  That ain't good.  However, the emergence of Kelvin "last seen missing layups" Grady and the presence of Odoms and Matthews makes the loss manageable.  If Stonum can run the routes, I expect he'll be targeted.  What's been rumored shaky has been his hands, so, well, god help us.  This offense relies more on the leetle slot dudes anyways, so the loss of Hemingway doesn't necessarily mean death.  But it ain't good.

Kyle Rudolph caught 4 balls for 29 yards last game.  Weis does utilize the Tight End in the receiving game, so Rudolph will have to be accounted for.  According to the House Rock Built, he's definitely more a receiving TE than a blocker.  He'll be one of those guys Clausen hits on a 3rd and short that causes me to throw things.

I think Koger is more athletic, and like much of Rodriguez's offense, he seems designed to run seam routes and look for big plays.  That waggle last game was a thing of beauty.  Rudolph seems more like a grind the chains type, while Koger seems more the big play type.  Both important, both pretty good...

As has been detailed here before, Notre Dame returns 4 starters on an offensive line that features more 5-stars than a meeting of the joint chiefs.  Over the past 2 games - including last year's bowl game, obvs - they've given Clausen enough time to sling 9 TD's.  With Clausen taking the expected leap into Junior year awareness, and a line that might actually provide him some protection, the passing game of ND could be pretty fierce.  That said, Weis has really tinkered with the left side of the line, and that's exactly where Brandon Graham lives.  Given that Rudolph isn't much of a blocking TE, Michigan could get pressure with 4 rushing.

Well, the line looked pretty good against Western.  Molk had some dumb holding calls, but in all, a pretty even day.  I'm not terribly concerned with Notre Dame's defensive line, especially given that Nevada racked up 118 yards of rushing, and had their starter average 6.3 yards per carry.  Given that Nevada was hovering around the top of the NCAA last year in rushing, this can be explained away, but Michigan's offensive line is going to be bigger and meaner than the Nevada line that had Notre Dame on skates for a good portion of the game.

Advantage Michigan but not by much

Well, I kind of blew it up there in the O-line section, but yeah, they didn't look good against Nevada.  I think they're going to have their hands full with the Michigan offensive line, especially if Michigan decides to employ MINOR RAGE runs up the gut.

The defensive line is probably the strong suit of this Michigan defense, featuring already ferocious Brandon Graham, developingly ferocious Mike Martin (GET IN THE CAR), and an impressively ferocious for being a true freshman and such Craig Roh.  If Michigan can get their pass rush out of the front 4, they will do well.  If they need to bring in a LB or Safety, they will be gambling.

Toryan, Scott and Brian Smith (not related AFAIK) make up the corp of this experienced unit.  These two combined for 8 tackles, four of which were losses.  Freshman all-everything recruit Manti Te'o will play as well, and while he had a "welcome to NCAA" type game against Nevada, he is still a presence to be dealt with.  As a corp they are fast and experienced, and will definitely provide more of a challenge than WMU's.  Missed blocks against this unit will equal immediate tackles; probably not "gets hit but drags the dude for 3 more yards."  The UM linemen are going to HAVE to put a body on these guys.

Ok, so Stevie Brown was significantly improved at his new linebacker position, just like we all knew he would be.  Anybody who watched him wreck shit at the line of scrimmage last  year then screw up coverage knew this.  Next to him is Obi Ezeh, who looked pretty good against Western, but was found to be hesitant on a few plays:

Roh(+1), in a two-point stance as Michigan moves to an under look, attacks the RT. RT doesn't look like he's attempting to block Roh, as the play is supposed to go up the middle. This is a mistake: Roh gets underneath the guy and blasts him back into the ballcarrier as he passes. An unblocked Ezeh—no Broncos got off their doubles—cleans up. Michigan was in a pure eight-man front here, BTW, with a blitz off the edge from Williams absorbing a pulling TE. Would like Ezeh to be a little more proactive here and shut this down closer to the LOS.

I have no way of telling whether the UFR is the end-all-be-all or whether Ezeh had other responsibilities, but this was a recurring theme.

Advantage Notre Dame but not by much

Senior Kyle McCarthy and Sophomore Robert Blanton both got picks last week as they shut down Nevada's passing offense.  Nevada, however, is a known running team, and while the DB's got a bit of work in, they weren't exactly facing Tom Brady's Patriots here.  I expect the unit to be improved, if only because they were starting a slow white boxer at Safety prior to this year.  The jury, however, is still out on this unit.

Michigan meanwhile returns Donovon Warren, who was very impressive in his Junior year debut against Western, and Boubacar Cissoko who looked good at times, and competent at others.  Boubacar was held out of the second half against Western due to a tweak, and what we saw behind him didn't looke good.  I foresee Justin Turner getting some reps this game if Cissoko can't go or re-tweaks something.  As long as the four man unit of Warren, Cissoko, Woolfork, and Williams stays on the field, Michigan has a good secondary.  If just one of these dudes goes down, we're in trouble

Advantage Michigan as long as they don't get injured.  If Floyd sees significant time, this shifts to ND quickly. 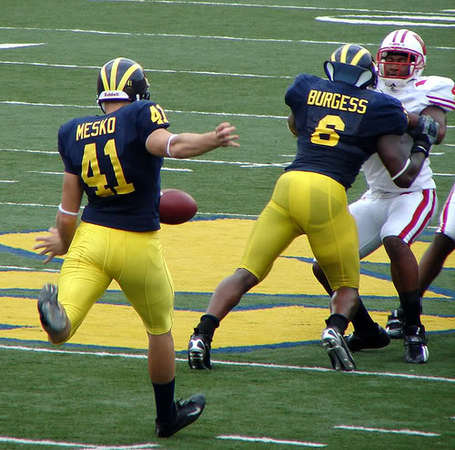 In all seriousness, Michigan holds an advantage in this area given the Zoltan factor as well as the 44-yarder kicked last week by Olesnavage.   Notre Dame is starting some sort of freshman walkon not named Rudy at kicker, which is questionable, and has a serviceable punter.

I think Michigan actually has a better defense provided that they are able to stay on the field without their feet and tendons bending the wrong way.  Notre Dame's, however, is not far behind and given the fact that the Michigan offense is still new and still run by newbies, we might be in trouble.  If Tate can still make the smart decision in the face of the TENUTA-BLITZ, we'll be in business.  If he gets flustered, well, it might be time to start thinking about Central.

Much like Brian and House Rock Built guy, I see this coming down to a few big plays.  Notre Dame will throw deep, and probably connect on one.  Michigan might catch a TENUTA BLITZ on a screen that goes the distance.  If we can force Clausen into Yakety-Sax mode - which he's prone to do in the Big House - we'll be in business.  If he starts converting 3rd and 7's with regularity, we're toast.