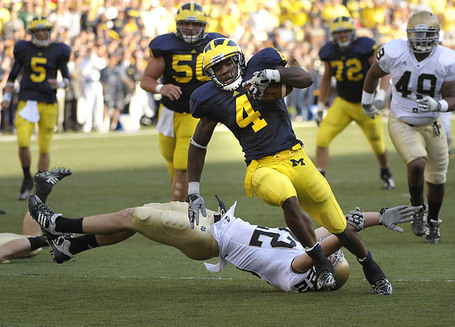 It's hard to be a fan and a writer after a game like Saturday's Michigan Notre Dame clash. As a fan there are so many things running through your head that start with "wooooooo!" that it's hard to sort through the chaff to find something meaningful to express other than "wooooo!" As a writer there are just too many story lines to play with. You get half way through one piece and find you're writing about another just as compelling hero, play, or moment in time. Basically your brain just overloads and you slump into a happy, sedate, state of euphoria that lasts three to four days.

It's Tuesday and I still haven't come down from Michigan's 38-34 victory over Notre Dame. I've watched the game a half a dozen times. Thoughts of Forcier splitting the linebackers, Minor gashing Notre Dame's line, Stonum breaking free, and Warren blanketing Tate and Floyd are still bouncing around my skull. Likewise, visions of Clausen picking up 25 yard clumps of turf seemingly at will, our Defensive line being roto-tilled into the turf, Cissoko being torched Trent-style, and nearly 500 total yards by the Irish are still ricocheting off my consciousness as well.

Where do you start? Whom do you start with? You can talk about Tate Forcier's performance all week with running out of material. Then there's Brandon Minor and his incredible, punishing ground game. The Defense's final stand. Weis' play calling at the end of the game.

What it comes down to is that this win was a team win. For every punch landed by Notre Dame, Michigan counter with one more. For every player that left with injury, another stepped in and stepped up. Junior Hemingway missed this game with an injury so Darryl Stonum took his place. Out went David Moosman to injury, in came Perry Dorrestein. Prior to this game would you ever have expected that two of the most crucial catches of the season would be made inside of two minutes of the Fourth Quarter by LaTerryal Savoy? Did anyone have bets that Craig Roh would be this good or play this much? That cornerback Troy Woolfolk would anchor our defense, and anchor it well, at safety? Finally, that Carlos Brown and Brandon Minor would be just as valuable as pass blockers as they were as runners?

There are so many questions that you run out of space to proffer answers. But unlike last year, they are happy questions. Rhetorical ones, that don't require you to slump forward, furrow your brow and sigh as you answer the question. For once, Michigan fans can simply enjoy the ride. We're playing with house money, lots of it, and it feels good. No one expected a game like Saturday's out of this young team. And now we can sit back and enjoy it.

Two games ago this team was an unknown. A fresh face and clean slate. For the faithful, we couldn't help but be cynical. Ever since 2002, we've been trained to expect that if things look too good to be true, then they were. But the same cannot be said for the 2009 Michigan Football Team. Maybe they're too innocent to realize the pressure on them. Most of them are too young to know some of the let downs we've experienced. Either way, they're playing like they expected to be this good.

If you ask them, to a man, they'll tell you they knew it. That Michigan would surprise people with how good they are. But we heard this last year. And the year before. Every football player will tell you at the start of the season that they'll "shock the world." No way. Coming off a three and nine season you know there's work to be done, and that it takes more than an off season to cure last season's ills.

But two games in, this is a good team. A confident team. They're playing as a cohesive unit and playing like kids that care about one another. There are always two separate people there to help someone up. The two quarterbacks, Forcier and Robinson, are the first to greet one another after a big play. The defense, which spent most of the day getting burnt crispy, never gave up and never showed the slightest waver even when things and penalties didn't go their way.

There will be speed bumps along the way. There may well be a loss we don't expect. But, today, this is no longer an innocent, fresh faced team. It is a confident team with everything to play for and everyone who doubted them still to prove wrong.