Share All sharing options for: Unit by Unit: Breaking Down Michigan Football's Defense Following Its Win Over Notre Dame

We're running a little behind, so it's time to get into the Michigan Notre Dame Unit by Unit breakdown. We'll take a hard look at the players and the coaches for each particular unit on the team, and bring them in for a pat on the back or a wag of the finger. After we've looked at each position, we'll give you a final wrap on the team's play on Offense and Defense (Special Teams too!). If you're looking for more detail, game bullets are here, the wrap up is here, the boxscore is here, and the general AP recap is here. There are the links, so now let's take a good hard look at....

It's hard to put on a smilely face when your defense surrenders 34 points and 490 total yards, so we're not going to. The defense was not good. If you felt like saying awful, I wouldn't blame you. In terms of being fair, the Wolverines made some critical stops when they needed to. Over all, however, Weis and company had Michigan's number most of the day. 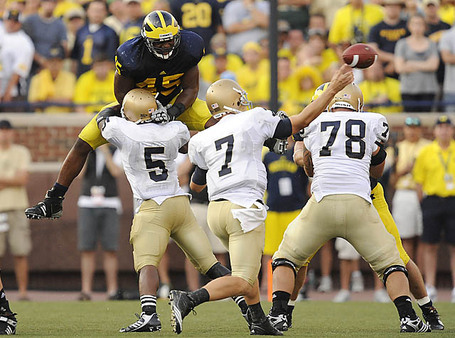 A picture is worth 2,200 words. via multimedia.detnews.com

With Notre dame in max protect most of the game, it wasn't going to be easy for Michigan to get pressure on Clausen. And they didn't. For the majority of the game Clausen was able to sit in the pocket and pick Michigan's secondary apart without anyone near him. Brandon Graham spent his entire day trying to split double teams or getting horse collared as he went around the left and right tackles. Even so, he was able to get some pressure and the occasional knock down of Clausen. Plus, he was stout in against the run, notching two TFLs. The day for the rest of the line was fairly muted. Craig Roh spent most of his day bull rushing his way out of position on sweeps and counters. Ryan Van Bergen and Brandon Herron were all but invisible. Mike Martin, like Graham, had two defenders in his way the entire game and got absolutely no pressure on Clausen. Ronaldo Sagesse played a little bit and faired decently. Other than that, nothing.

It's pretty clear from here out that teams will basically double the hell out of Graham and Martin and force Herron, Van Bergen and Roh to beat them. All three are undersized and got absolutely no pressure on Saturday. Maybe this is an aberration based on the quality of ND's offensive line, but I don't think so at this point. Because Michigan couldn't get any pressure on Clausen, or effectively stop the run, it forced the Wolverines to begin bringing the house on blitzes which resulted in some notable pressure (re: last ND offensive play) but also some huge wholes in the secondary. If Sagesse can start playing regularly, then yeah, that helps. But realistically, Herron, Van Bergen and Roh have to start getting pressure for this defense to be effective going forward. They weren't against Notre Dame, and the results are painfully obvious.

This was not a good performance.

Yeah. yeah. Kittens are Brian's thing. But you try finding a better metaphor for this group. Good lord were they bad. If Obi Ezeh wasn't getting caught out of position, Jonas Mouton was offering up chin music. Let's put it this way. Stevie Brown was our best linebacker. BY FAR. This guy is a converted safety who's time at Michigan is better known for his blunders than fine play. He was your best player. To his credit, this was not simply an issue of best by default. Brown was pretty damn good all things considered. He shot into the backfield and collected to TFLs. He forces a critical  fumble. He didn't miss a tackle, and was excellent in space. Honestly, I'm starting to believe he's a legit linebacker. A horrid game against Eastern/State may dissuade me of this. But right now he's head and shoulders above Mouton and Ezeh.

Speaking of which. Lord. Bad gap play. Inability to shed blockers. Basically looking lost for most of the game. Roughing the passer. Etc... The majority of Notre Dame's 154 yards on the ground were directly attributable to poor linebacker play. Personally, I don't know what to make of it. All I know is that Michigan's linebackers were not the aggressors on most of their tackles, were flat footed at the point of contact, and only looked effective when they were told "Danny, I want that ball. Get me that ball." and turned loose on the blitz. And even then it was a little spotty. Something's gotta give soon. Notre Dame is not a rush first offense. If we play this way against pass based teams, God help us against power rushing teams like Penn State, Michigan State, Wisconsin, Iowa, or Ohio State. But Dave, aren't some of those teams "spread" teams? Yeah, but they're all rush first teams with equal or better offensive lines (maybe not PSU, but they're huge so that evens out). If the linebackers can't start filling the proper gap and attacking the ball carrier rather than waiting for contact to comet to them, we're going to be in trouble.

I'm kind of at a loss to describe this. Boubocar Cissoko was awful. Just dreadful. Donovan Warren was decent, but I'm not anointing him Marlin Jackson II and I'm certainly not saying his performance warrants a high draft pick and loads of money. I thought he got away with a lot of defensive holding on the day. The second down pass on Notre Dame's final drive? Yeah. He's holding Tate's right arm the entire way. That said, for all but four plays (one of which was a TD that he was torched on) Warren ran with Notre Dame's receivers and basically planted himself in their helmets on each passing route. He's good, but play that game away from Ann Arbor and Warren's getting flagged fairly often.

Back to Boo Boo. He was alone the entire day against a guy that was faster, taller, older, and better than him all day. The results were not good. No safety help. No nothing. So you can write it up to growing pains. No. You can't. Boo Boo spent his entire day turning before he needed to. Opening his hips the wrong way on the cuts. Breaking from his back pedal way way way too soon. His tackling was mediocre at best.

Here's the thing. Boo Boo is a true sophomore. He'll get better or he'll get passed on the depth chart by Floyd or, hopefully, J.T. Turner. But he was going up against the best set of receivers he's going to see this year in his second game of the season after playing only a handful of games a year prior. I'm going write this up as a bad game for a kid with what I hope is a promising future. But he's going to need a lot of coaching after this game. Maybe he's gotten by on talent all this time and it's masked some deficiencies. It's possible. But right now he needs a lot of time in the film room and some heavy duty coaching.

Moving away from the corners and into the deep secondary, I have to admit I was very pleasantly surprised with the play of Michigan's safeties. Troy Woolfolk, Michael Williams, and later Jordan Kovacs played excellent. A reason for this may have been that Michigan was in deep cover for most of the game, but I thought they were pretty good. The two led the team with 8 tackles a piece, and had Williams not gone down with cramping, he probably would've been in the 10 tackle range.

If your question is "how can you be happy with 330+ yards in the air and the safeties?" the answer's simple. Michigan made Notre Dame earn the yards. Unlike last season, Notre Dame wasn't able to have one play drives. Sure, they gave up yards in chunks, but they didn't give up the bomb. There wasn't a "big play" per se. There were a lot of medium plays, but nothing crippling. The safeties were stout in the run game, especially when you consider just how bad the linebackers were, so they get some credit.

Overall, a decent day out of the safeties and an "Arg!" to "OMG Get me a gun!" day for the corners.

Rain = Pour. Special Teams were a mess too. Waaaaay too many long run backs on kickoff coverage. Zoltan Mesko was off all day as well, shanking a punt or two. A missed field goal from Jason oles....whatever. Defensive special teams were abysmal.

On the other side, the offensive special teams were generally okay (FGs not included). Darryl Stonum's run back was awesome and Michigan came close to breaking one or two other big runs. While Michigan's return game probably won them the game, their coverage almost lost it on a couple of occasions. There's plenty of work to be done.