Share All sharing options for: Deep Breath, Time To Focus

Preamble: See Dave's post on the trap-like nature of this game please.

So the Maize and Blue find themselves freshly ranked and still trying to get everything back into focus after last weekend, suddenly it's Friday again and what do you know, we have a football game against Ron English's Eastern Michigan squad tomorrow in The Battle of Washtenaw County.  What do you know about Eastern?  Not much you say?  Well let's learn a little shall we?  First off, the Michigan connections are thick on the ground:

Unfortunately for Eastern, one of the other things one notices at a quick glance is their current placement with in the "Bottom Ten".

So, given that and the Eagles'; 0-2 start against Army and Northwestern, what have we got here?  Well, giving up a lot of rushing yardage to Army is not a crime, Army currently ranks 8th in the country in rushing .... however losing to Army is... well it's not good.  Also, given that Army has um, the WORST passing attack in college football at 120th with 63 yards/game, the pass efficiency defense metric you see above is likely skewed a tad...

Of course no discussion of Eastern is complete without addressing their head coach, Ron English, who gives perhaps the single most unbelivable collection of results you can possibly imagine (possibly NSFW?) when you search for images under his name on Google...  forgive me for not being up on my pop-art I suppose.  Anyways... 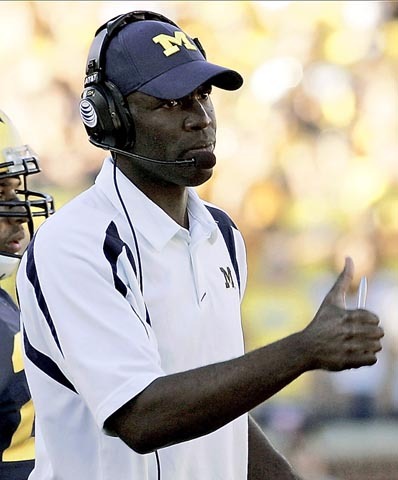 English is a guy who needs no introduction to Michigan fans, he fielded the 2006 defense, which for 11 games managed to stoke the fires with legitimate comparisons to that legendary '97 defense.  He brought an aggressive nature and great recruiting ability to the staff, and for that we owe him our gratitude.  I certainly hope he gets a warm welcome from the Big House tomorrow.  That said, he also managed to cause me to lose my mind with his insistence of putting Crable down on the line of scrimmage time and time and time again....  For a moment, just think what Crable would have done in our current defensive scheme... sigh.  Also, as Dave alluded to, his performance against spread teams was somewhere on the stomach-punch level...  Anyways, English has since moved on to take over a program that hasn't had a winning season in 12 years nor made it to a bowl game since 1987.

He has transitioned the Eastern attack from a spread unit to a pro-style attack, and as we all know too well, transitions don't always go smoothly.  The Eagles are currently 104th in the nation in Sacks allowed at 3.5 per game.  Quarterback Andy Schmitt has thus far accumulated the following numbers in his first two games: 38/59, 331 yards, 2 TDs, 4 INTs.  There are however, signs of life, see his charges scaring the life out of Northwestern last week:

So there you have a brief synopsis of Eastern Michigan and what they might bring to the table tomorrow.  I'll be very interested to see how Coach Rodriguez and his staff have this team focused for the task at hand.  With all due respect to Ron English and crew, I hope that this team comes out and puts the hammer down tomorrow.  For so long Michigan has had the nasty (and accurate) reputation of playing down to its opponents (see our 33-22 win over Eastern in '07).  Frankly, we have absolutely no business overlooking anyone after the past few years.  There are still a LOT of things this team needs to work on on both sides of the football and a lot of guys who need to gain valuable experience prior to launching into the rest of the season.  I'll be particularly interested to see if any of our younger secondary members get a shot at seeing the field to gain any kind of experience at all, we're so thin there that any number of snaps for those guys is invaluable at this point.  I've always been a big proponent of the coach-speaktastic "one at a time" philosophy, and after last Saturday's events, for the first time in a long time that approach has been put to the test by sections of the fanbase.  Let's get out there and take care of business tomorrow!