The Endzone Through Carlos Brown's Eyes

Share All sharing options for: The Endzone Through Carlos Brown's Eyes

First down. Where are we? At the ten? Cool. I'm getting the ball, right? You just gave it to Michael Shaw for a series, you're damn right you're givin' it to me. Cool. Looks like that doofus with the red gloves is wavin' his arms. Time to roll.

Everybody runnin' out. Me an' Tate in the backfield. Love that kid, but he's always joggin' out of the TV timeouts. Think I'll put some shaving cream in his socks. Teach him a lesson. Don't know who he thinks he's foolin' with that razor and shaving cream in his locker. Little man ain't never shaved in his life. A'ight. Time to get set. What we got? Molk's smilin. Means he's about to hurt someone.

Tate to my right. Eastern Safeties split. Two backers. Third LB down weak on the slot an Martel. He's got the leftside DE. Schill's got the NT. Three wide. We're going right up the middle. Dave's my man, I'm followin him.

Got the count. SNAP. Quick right. Two hands. Martell crossin, Schill levelin. Damn. I could drive through this. Mark's got the left backer. Dave crushin the right. One safety, up an to the right.

It's just you an me, boy. An you ain't gettin near me 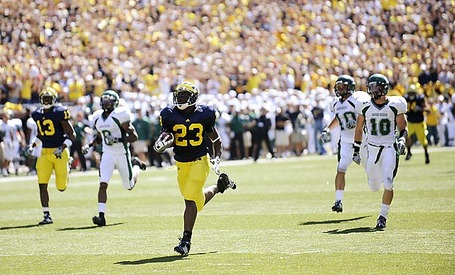