Hail to the Victors! Michigan takes care of Eastern

Share All sharing options for: Hail to the Victors! Michigan takes care of Eastern

On what can only be described as a gorgeous fall Saturday, this Michigan football team probably got a little more than they were expecting from EMU in the first half, but managed to overcome some difficulties to put 45 on the board and take care of business heading into the conference schedule.  Oh and Carlos Brown had his "I'm FINALLY healthy" game that we've all been waiting a long time for.  Congrats sir, congrats indeed. 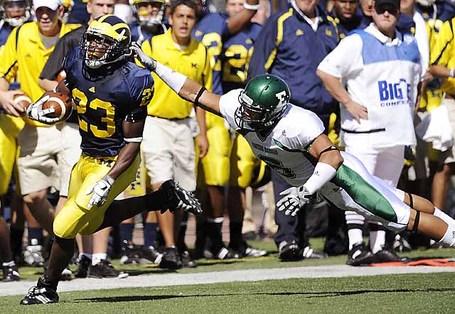 - I'm not going to join in on the whole "BTN ANNOUNCERS BLER BLER BLER!" nonsense mainly because I didn't think it was that terrible.  Yeah they missed a few calls by misidentifying players (for example, Renaldo Sagesse is not Brandon Graham), but not enough to detract from the watching experience a la Mike Patrick.  That said... it'd be wonderful if you could, you know, manage to get the cameras on the action on the field.  I think we missed at least four plays Saturday, and apparently nobody realized that Roh intercepted that tipped pass.

- I didn't comment on this prior to the game, but a big ol' wag of the finger to the Big 10 for suspending Jonas Mouton for this football game.  That was complete garbage.  Watch the "play in question" and you tell me where he's deserving of any punishment at all, and nevermind the completely dirty play by the ND guy the entire time either.  That was flat out horseshit and caving to the muffled cries of Charlie Weis is even worse.   Furthermore, the conference has gone ahead and set an awesome precedent for themselves now, which Coach Rodriguez seems angry enough to bring up at every possible opportunity.  Delany and crew can start here (Manny Harris agrees with me on this one):

- SPARTY NO!  I still cannot believe the two play sequence of events that sealed MSU's doom down in South Bend on Saturday.  That guy could not have been more wide open in the endzone, and then to follow it up Cousins makes perhaps one of the most ill-advised throws of all time, seriously, it's right alongside Stanley Jackson's toss back in '97.  It's too bad too because the spleen coming from South Bend would've reached new highs had State pulled that game out.  Also, if an opposing player takes a planned dive into your marching band, can you bitch about it endlessly to get that guy suspended for the next game?

- Florida... yawn.  I thought they were supposed to beat Tennessee by eight billion?  The fact that they only won by 10 against a team that clearly had no aspirations of, you know, throwing the football downfield should probably concern some of the Gator faithful, but hey, that's just my take.

- Penn State and Iowa... who knows anything about either of these teams?  Nobody?  Ok!!!

- I'm mentioning this first because its something that was so sorely missing last year and has made all the difference in the world this year: BLOCKING.  Our blocking at the LOS and downfield has improved immeasurably since last season.  The reason these guys are springing these huge plays now is because we've got guys doing all of the little things right without the football... just awesome.

- It was downright fun to watch Carlos Brown run the ball, not only did he display the legendary Spring Game top-end speed around which he has built a small legend, but on top of that he displayed a level of vision that I had not seen from him before.  He ran hard, through tackles, picked his cut back lanes and really set up his blocks.  Awesome performance.  He could've named his yardage on Saturday, awfully proud of him and how well he's stuck this whole thing out.

- Would've liked to have seen just a little more of Mike Shaw and Vincent Smith since it's apparent that Brandon Minor just isn't that healthy yet.  Speaking of that... Minor sure doesn't look "hobbled" out there, but if he's touch and go, why play him at all?

- I don't quite understand the "Tate Forcier played like a true freshman" drum-beat that I've seen since this game.  No he didn't rack up a ton of yardage (we didn't have to throw), but the only two decisions that I have any problem with on his behalf at all were with ball security.  He seemed to get a little lax on a few of his scrambles holding the ball out, and we were fortunate to recover when it was knocked loose.  Throwing wise he looked absolutely fine.  He and his receivers weren't helped at all by the non-PI calls either.  He is going to have to learn that sometimes you just take the sack and live to fight again the next down.  Also, please don't cause my heart to stop again, thanks.

- I really appreciate that we put that game away, 21 second half points to push it to 45-17 was great to see.  I'm not advocating running up the score, just put the game away when you have the opportunity, thanks.

- I know we were going to get the ball to start the 3rd, but was anyone else stunned when we didn't go for it on 4th and 1 at the end of the first half??

- Denard is the man, he just brings so much to the table.  Some people have taken a huge issue with his two picks. Nevermind that he threw an absolute strike on an out to Odoms who may or may not have bobbled the ball while going out of bounds.  I don't question his ability to throw the ball at all.  He needs those kinds of reps in games and should continue to receive them.  He has an arm, let's just all remember that he's RIDICULOUSLY young and his decision making will improve.

- Not too much Koger Saturday (well not too much of any receiver really) but he made an absolutely fantastic block that wasn't highlighted by the BTN on Brown's first run from scrimmage.

- Webb needs to remember to run his routes to the sticks.

- Ok, going back and watching this, there are just a few issues I have...

- Defensive line penetration was awesome at times and non-existant at others... we need to be more consistent here moving forward, although it would help if every once in a while the refs actually threw a flag for holding.

- Some CLEAR over-pursuit, many guilty parties here, but it sure seemed to me that people were forgetting what their roles were and losing contain on the outside a LOT in the first half.  We bit so hard on that play-fake bootleg for a TD that it wasn't even funny.

- Did Eastern seriously run like 7 straight counter plays to score on that one drive?  We were getting blown off the ball and sealed out of the lanes like we were playing a major power rushing attack there... did nothing for my defensive concerns about stopping the run.  Yeek.

- Glad Mike Martin wasn't seriously injured, that EMU center did more than his share of chop blocking, of course it wasn't called once.

- Perhaps the worst pass-interference call I've ever seen against Cissoko... his coverage was better for the most part, but he was also completely bailed out on that 4th and goal where the EMU guy just dropped a perfect throw.  The TV coverage even went back to point out how Boubacar turned the complete wrong way when the ball was thrown.

- I think the players are downplaying the adjustments at halftime.  I have been thrilled with our 2nd half D thus far this year, tip o the cap to you Mr. Robinson...  Now let's start doing it for 60 minutes eh?

- Mouton's absence likely had a larger effect than I would've anticipated.  Speaking of LBs, Ezeh makes two plays a game that demonstrate what he could be at the LB spot, and about 6 plays a game that just don't make a whole lot of sense.

- Olesnavage, keep drillin' em down the middle man, good on ya.

- Someone got a finger on that first punt and we had good pressure on their punts all day, I think we might get to one outright at some point this year.

- Dear Greg Mathews and/or coaching staff... MOVE UP AND CATCH THE BALL!  What was going on Saturday?!?!  It was pretty evident that their punter wasn't going to get the ball anywhere near where Mathews would line up before the play and yet did he move up even once?  Nope.  Cost us some serious field position on multiple occasions...

- Hard to find a whole lot to get worked up about in 45 - 17 win, yes the D didn't look dominant at times, but they clamped down big time in the second half.  Yes we only threw for a meager amount of yards, but we didn't exactly have to throw, well ever.  Again, it was nice to just come out and take care of business, especially once a few breaks put Eastern within shouting distance.  Continue taking 'em one at a time and GO BLUE!