Share All sharing options for: Center David Molk Out 4-6 Weeks with Broken Foot 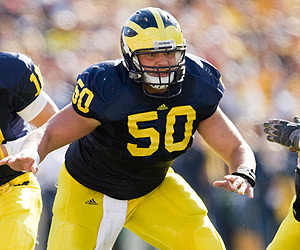 Per the Michigan Daily's coverage of Rodriguez's press conference this morning.  Rocko Khoury or David Moosman will play in Molk's place.  This could be a significant blow.  Molk was very well suited to blocking in Rodriguez's system, and the Center is the anchor of the entire line.  Mooseman - looking to return from his own injury - was replaced without a hiccup previously, and hopefully he will be inserted at the Center position without too much of a transition.  Line play is about turning 5 bodies into one cohesive unit.  Molk is a leader, and the Center is usually what glues the line together.  Definitely worth monitoring.