Share All sharing options for: Wednesday Happy Hour Returns to Give You All Your Michigan Football and Michigan Basketball Updates

Maize n Brew gives you your daily (or semi-daily) rundown of all the Michigan Football, Michigan Basketball, College Football, and College Basketball news you need to get through the tedium of your boring desk job. For good measure we'll throw in a little irreverent information, comedy and commentary to help you salt away the time until the clock strikes 5pm.  Want it in 140 characters or less, follow us on Twitter! Or you can find us on Facebook! Here's what's ON TAP:

The Big Ten Network released its hockey broadcast schedule for 2009-2010, and there is ample Michigan representation:

The best thing about this schedule is the February 6, 2009 Michigan @ Wisconsin game. Why? Because it's being played at Camp Randall, baby. And yours truly will be there. In Madison, Wisconsin. In February. For a 6PM EST game. In a place where the sun goes down at 3pm. Christ. My buddy MB sums it up perfectly.

The designs for the new Michigan Basketball practice facility have been released. In a word, sweeeeeeeeeeeeeeeeeeeet. This thing is going to be beautiful. 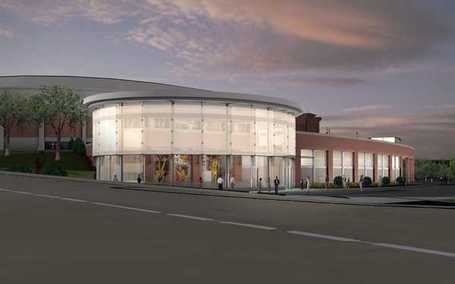 Auburn has seen the rain, and saw that it was good (for school spirit) - THIS is why football in the SEC is different than anywhere else on earth. Granted, I've got money these little bastards wouldn't sit through 2008's Northwestern game in a freezing rain downpour, but that's some impressive shit in the middle of a monsoon.

Do not be alarmed, but ... who's going to beat Cincinnati? A great question posed by Dr. Saturday. And the answer is.... er.... West Virginia? Uh. No. With the decline of the Big East following Louisville's plunge into mediocrity, Rutger's return to being Rutgers, and West Virginia in the arthritic, forgetful hands of Bill Stewart, there ain't no one left to challenge Cincinnati and Brian Kelly.

Kelly, who is in my mind the most underrated coach in college football, can fashion a 30 point a game offense from duct tape and a coconut, and now it seems can do the same with a defense. If this doesn't scare you yet, it should. Previously, Kelly turned Central Michigan from MAC doormat to a legitimate "why in god's name are we playing these guys" BCS conference nightmare game. Just ask Michigan State. Now, given the full resources of a school who is now longer paying Bob Huggins' and his players legal fees Kelly is building a program that will not just threaten the top 10 every year, but belong there. Laugh and/or mock all you want, but Cincinnati is primed to be a very, very dangerous program as long as Kelly is there. Situated in the heart of prime recruiting country, the Bearcats don't just have their hand in OSU and Michigan's recruiting territories, with Kentucky across the river all of a sudden they're in the SEC recruiting base too.

If this turns into another BCS season for the Bearcats, be afraid. Pro football in Cincinnati is the most dysfunctional relationship outside of Steve Finley and Tawny Kitane. Once Southern Ohio realizes that they can love a football team and it will give them results in return... Someone from the Big XII North please hire this guy. I don't want him anywhere near a real program (ohnohedidn'tohyeshedid).

Big Ten teleconference notes - Rich Rodriguez indicated that Brandon Minor will be worked back into the fold immediately, once healthy. Of course Rodriguez didn't indicate whether Minor will be healthy for Saturday's contest against Indiana yet.

(more Michigan Football and some hilarity after the jump....)

Carlos Brown receives Big Ten honor - Carlos Brown was named Big Ten co-offensive player of the week for his performance in U-M's victory over Eastern Michigan last Saturday. Brown gained a career-high 187 yards on 13 carries and scored two first-half touchdowns in the win over Eastern Michigan. He scored on a 9-yard run toward the end of the first quarter and on a 90-yard sprint in the second. Yeah, I'd say he's deserving.

Michigan rises two spots to No. 23 in AP football poll - You like us. You really do!

Blogpoll Week 3 at CBSSports.com - Michigan moves up to #19 in the Blogpoll. Not so sure about that... a little high maybe?

Michigan MSU game slated for noon, Oct. 3 kickoff. The Big Ten Network will handle the play by play. Oh, it's on, brah.

Maize and Blue Nation takes a look at pass interference and the Eastern Michigan game. 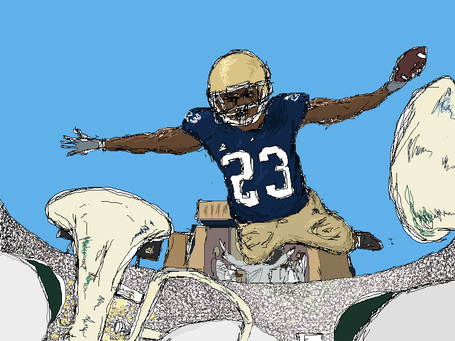 If nothing else, Duck fans, Chip Kelly respects the value of your bucks - Holy crap. This amazing story is courtesy of EDSBS by way of Dr. Saturday. Apparently a disgruntled Oregon fan (is there any other kind) was so fed up with Oregon's performance in Boise that he actually sent an invoice for his trip to Chip Kelly along with a detailed list of gripes. Usually something like this is cause for a "guess what I did story." Not anymore.

Chip Kelly actually sent a letter back apologizing for the team's poor play and lack of discipline, and included a personal check for the cost of the trip in line with what his disgruntled fan had sent! Holy Hell. I'm honestly flabbergasted. Yes. That's the only word that's appropriate. My visor is off to you, Mr. Kelly. Accountability is something we always hear preached from college coaches without anything to back it up from their end. To literally put your money where your mouth is, well, is a rarity and deserves to be commended.

Hey Marshmallow: Purdue's Toughness Comes Under Question After NIU Loss - The Rivalry, Esq.
Wow. The Rivalry also calls out Purdue's toughness after their loss to NIU. Honestly, can't say I disagree with anything Graham says. Purdue got popped in the mouth on Saturday and couldn't recover. They took an early lead on a fluke punt return and mailed it in from there. Not good stuff.

James Isch, the Chief Financial Officer of the NCAA, will take over as the interim NCAA president until a new President is found.

Penn State's Lee hoping to play - PSU Linebacker Sean Lee hopes to play in Saturday's Big Ten opener against Iowa, though the standout linebacker is unsure when he'll return to practice. Lee suffered a strain to his surgically repaired left knee against Temple. His absence could be a very big issue for Penn State in the face of a very large and experienced Iowa Offensive line.

Jesse Palmer and Chris Fowler Having a Little Fun with Clemson fans off the air - Holy crap is this funny. Palmer's dead on when he asks "how much money do you think he lost?" Enjoy.

Carlton Brundidge Commits to Michigan | Michigan Sports Center
Another big recruiting coup for Beilein. Guard Carlton Brundidge, a 2011 recruit from Southfield, committed to Michigan on Monday. Bundidge is Michigan's first 2011 recruit and man is he an important one. Uniformly ranked as a top 100 player in every recruiting service, Bundidge is ranked 34th on ESPN, 68th on Scout, and 98th on Rivals. Michigan Sports Center has all the details.

According to the Men's Basketball site, Eso Akunne was granted a scholarship for 2009-10 season last week. You know things are on the up-tick when one of the Michigan Mr. Basketball runner ups is walking on to your program.