Share All sharing options for: Unit by Unit: Breaking Down Michigan Football's Defense Following Its Win Over Eastern Michigan

We're running a little behind, so it's time to get into the Michigan Eastern Michigan Unit by Unit breakdown. We'll take a hard look at the players and the coaches for each particular unit on the team, and bring them in for a pat on the back or a wag of the finger. After we've looked at each position, we'll give you a final wrap on the team's play on Offense and Defense (Special Teams too!). If you're looking for more detail, game bullets are here, the wrap up is here, the boxscore is here, and the general AP recap is here. There are the links, so now let's take a good hard look at....

Michigan had a statistically decent day against the Eagles. They allowed below 300 total yards, giving up 106 passing yards and 179 yards on the ground. Eastern only posted 17 points, and 7 of those were the direct result of a really awful pick thrown by Denard Robinson. Plus, Michigan was without one of its starting linebackers and playing a coach that recruited a number of the players on Michigan's defense. So, it was a good day. Yes?

Yes. It was. While there will always be things you can nitpick (and we will, we will), the Defense seems to be playing alright. If I have a concern, it's that Michigan allowed Eastern to march down the field twice and put up 10 points early in the game. Most of that was on the ground. But the running game was something we always knew this defense would have trouble with. Before we get into the nitpicking, I think it's fair to say that before the season I told you this was what we'd get you would've taken this in a second.

Overall a moderate day for the defensive line. At this point it’s clear that Mike Martin and Brandon Graham are the anchors of the group and should both vie for First Team All Big Ten status, if not All American status. Yes, I think Mike Martin (only a sophomore) is that good. The sackless Brandon Graham is only sackless because he’s facing double and triple teams on a regular basis (triple being TE/T and a rub from the TB). Even so he’s been about half a second from recording a number of sacks on the season. The eastern game was no exception. From these two the only concern was Martin tweaking a foot or a leg early in the game, though he did return. Otherwise, it was standard good to excellent performance from the pair, mixed in with the rare loss of discipline on a play here and there.

After Graham and Martin, Craig Roh and Ryan Van Bergen were passable to good on the afternoon. Roh is still a freshman and still prone to overpursuit and running himself out of position. He did show some great concentration on his interception, fending off a lineman at the last possible second to make the grab. Roh is at his best in the pass rush, but is (and will probably continue to) struggling with the run. Van Bergen on the other hand looks totally out of position at DT. He’s simply not built for it. Eastern routinely doubled him, blew him off the line, and opened a big ole running gap. One on one Ryan’s shown some great strength and speed, but when he’s contending with two linemen he’s going to lose that battle 99 times out of 100 and it seems Robinson’s scheme (at this this scheme) requires the DE/DT to be able to hold that ground.

Which brings us to Ronaldo Sagesse. The Wrecker from Québec….er. The French Wrench? Whatever… If there has been one defensive leap forward that the fanbase (and the coaches for that matter) weren’t expecting, it’s been Sagesse’s giant leap forward into being a pretty good DT. He’s clearly athletic, but now that he’s getting some real coaching… damn son. Two TFLs in limited playing time and the ability to handle double teams. You’ve gotta love it. Even Greg Banks, yes he of PS3 fame and inexplicably high player ratings, contributed at DT on Saturday. There’s something going on with the defensive line coaching that I’m really, really excited about. When Will Campbell, all world freshman Will Campbell, is barely scratching the playing time surface in favor of Sagesse and Banks, and those two aren’t just filling space but are contributing; you should be excited down the road.

It’s been said elsewhere, but the Big Ten’s suspension of Jonas Mouton basically on game day was bush league. I don’t condone what he did. He clearly hit Olsen. But if you’re going to suspend a player do it in a timely manner and let the team adjust for the player’s absence. It’s a small consolation that they did this with Purdue’s Zach Reckman. Still, minor annoyance.

It’s a minor annoyance because Mouton, like Obi Ezeh, has been passable at best at linebacker on the season. While Mouton is a better option than Kevin Leach out there at SLB, the tackle numbers were about the same and the mistakes were pretty similar. I know I’m being harsh, but the linebacking play hasn’t been very good for a bunch of retuning starters at LB. But enough about who didn’t play and back to who did.

Mouton’s fill in, Kevin Leach, wasn’t noticeable during my first watching of the game. His name was called a lot on tackles and he had 7 before the half. My initial impression was that the kid was alright. On a second/third watching, he wasn’t as good as I thought but wasn’t awful by any means. Most of his contact was made well beyond the line of scrimmage and his gap control was off. To his credit, Leach showed some decent wheels and found himself involved in or making a lot of tackles. He’s a little undersized, so perhaps that’s why he’s fast for the position. But his size is a bit of a detriment as Linemen locked onto him and drove him toward Ypsi. Mouton’s been pretty good at shedding blocks this season so there was clearly a dropoff in run support with Leach in. As Eastern really didn’t throw at Leach I can’t really gauge his usefulness in that capacity. Critiques aside, Leach is a friggin walk on. The fact that he was out there, contributing, is awesome. Where you can look at the glass half full regarding J.B. Fitzgerald or our other LB recruits, I look at it as half full. Depth is an issue, but the fact that Michigan can plug in a walk on at a critical position and not get torched as a result is a good thing. Congrats to Leach on a good game.

At MIKE, Ezeh had his usual meh kind of day. He continues to excel rushing the passer, continues to wait for contact on the run rather than engaging the hit, and continues to alternate good run support with bad gap reads. If there’s one thing you can say, Ezeh’s consistent. You know what you’re going to get. Ezeh’s not going to be a dominant middle linebacker at this point. It could happen, but the chances are fairly remote. He’s a good linebacker and I’m content with that. When he tackles, he wraps people up. When he blitzes he makes plays. He’s just not Chris Harris. And I’m cool with that.

Stevie Brown, again, had what I considered a decent day. He made some stops, played good coverage, wrapped up consistently. Brown success at his new position will be judged by how he handles the conference season, but so far he’s easily been the most consistent and arguably best linebacker on the field each game. Against Eastern he was aggressive, good in coverage, and attacked the ball carrier in space. If he was three inches taller and 50 pounds heavier he’d be all world. Right now, though, he’s pretty good and deserves some praise.  J.B. Fitzgerald played. That’s about it. 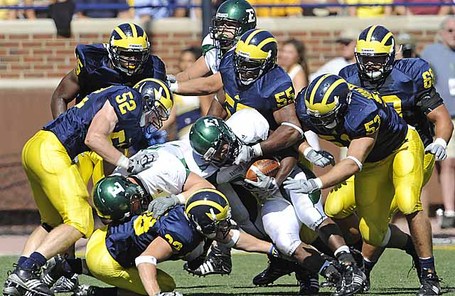 Considering that the majority of Eastern’s yards came on the ground and they only posted on touchdown through the air, it’s hard to be too critical of the secondary. Boubacar Cissoko bounced back from a rough Notre Dame game to have an excellent game in coverage. Donovan Warren continued to be Donovan Warren, clearly showing that he is arguably the best cover corner in the Big Ten. Troy Woolfolk and Mike Williams were passable in coverage, and despite a mistake in coverage here and there (minor ones people, shading issues rather than "that looks like a run so why is the ball going over my head?" mistakes).

Run support, well, that was another matter. The only player in the group not to make a horrid tackling mistake was Donovan Warren, who spent a good portion of his day making run tackles he should’ve have needed to make. Cissoko froze on an open field tackle on Schmit, whiffed and allowed an additional 15 yards to a slow lanky white boy. It was reminiscent of Coner’s ole! on Stevie Brown in the spring game. Likewise Troy Woolkfolk came up to lay a big hit but forgot about the whole "wrap him up" thing allowing another ten yards. Overall, while the coverage was decent, the tackling in the secondary was very bad against the run and may be cause for concern. Watching the game, I think the secondary’s issues were more lack of focus and playing down to their competition rather than a systemic problem. I honestly think after battling Notre Dame’s receivers to the death, the secondary thought they could just pop Eastern’s players and they’d go down. Hopefully, this was a learning experience along those lines.

It should be noted that when Mike Williams went down, Jordan Kovacs again replaced him without issue. Whenever you can replace a safety mid game and not end up crying, it’s win win. Kovacs was basically invisible to me, other than the occasional thought of "who’s the melanin deficient dude in the secondary?" So far, Kovacs is easily the best of the many walkons on the team and has thus far proven himself to be a capable player. The real test of this theory will begin over the next few weeks as teams start to attack Michigan’s secondary with a little more frequency and try to isolate Kovacs, Williams and Woolfolk in the passing game. I can’t imagine a Big Ten Offensive Coordinator saying "Oh look, a walkon. Lets go after Warren instead."

For the game, yay! No Big Plays! Woo. Overall, it’s still too early to tell.

After an off game, Zoltan has returned to his normal self and is back to booming the ball. He booted 4 punts for a 45.5 average, including a 59 yarder. Not so bad. The field goal unit was barely used, but Jason Olesnavage was good on his only try and all his extra points. The return game was decent off the tee, but we garnered almost nothing off punts. Part of this had to do with Eastern shanking the ball. Part to do with our obvious attempts to block everything. And finally, part to do with our desire not to turn the ball over. I’m fine with this. Out coverage on kickoffs and punts was much better than against Notre Dame. I’m positive this had something to do with the quality of athletes we were facing, but overall a much, much better coverage game.