Hail To The Victors! Michigan Survives Against Indiana

Share All sharing options for: Hail To The Victors! Michigan Survives Against Indiana

So Indiana really took it to Michigan at times yesterday.  Though at other times, when it really mattered, IU couldn't capitalize: held to redzone FGs off of freak/poor Michigan turnovers, several three and outs with a chance to build on a lead while Michigan was sputtering, and a missed FG late in the game.  IU certainly had their chances, but came up short on the ones that ended up making the difference. 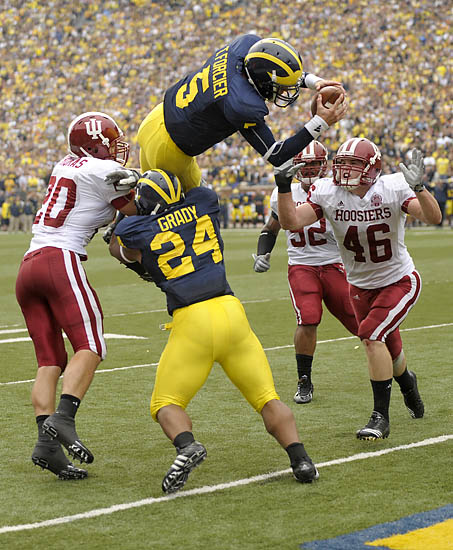 Photo by David Guralnick via multimedia.detnews.com

- So if I had told you back in August, "Hey, I'm from the future, Michigan will leave September at 4-0!"  What would you have said?  I'm so thrilled I can barely express it, so take any criticisms that follow here with that in mind.  Yes we've got a lot to work on, but uh, 4-0 people... WOO!  We really struggled at times today... and won!!!!  I couldn't care less about what opposing fans think, say, or try to extrapolate from these kind of games, we're finding ways to win even when we're struggling.

- The illegal formation penalties called were inexplicably bad, seriously, when has that EVER been called?

- By the way, if I had come back from the future and told you Michigan State would start 1-3..... anyways.

- Congrats to Iowa, we shall continue to ignore your existence for another week, but by ALL means please go ahead and continue with the hyperbole regarding October 10th and our tiny quarterback... no really, please continue on in TREMENDOUS detail.

- Is anyone going to ask Urban Meyer WHY Tebow was still in the game and throwing the football when he got walloped like that?  I mean, it was what, 31-7?  Classy.

- Can we put the Miami and FSU hyperbole nonsense away now? 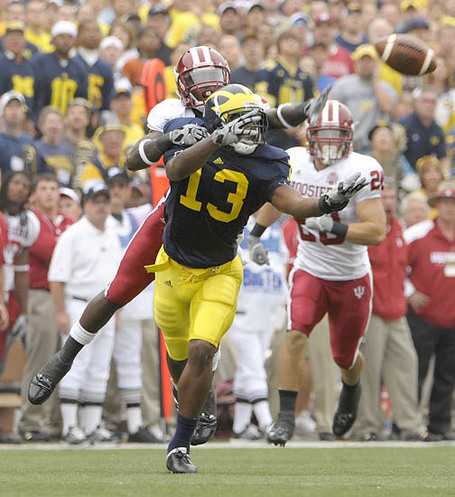 This is not pass interference.....

Photo by David Guralnick via multimedia.detnews.com

- Ok, this one goes first because it's the one major question I have about Saturday.  WHAT HAPPENED TO CARLOS BROWN?  Seriously, he's our best option at running back right now, and we totally got away from him in the second half when we were struggling to get things going.  Brown accounted for 2 TDs and 144 yards on 12 touches and was virtually a non-factor after halftime.  Seriously, he's as dangerous as anyone out there, what happened?  There may be a perfectly legitimate explanation (dinged up, sore, some other problem I'm not thinking of?) but it'd be great to know what it was.

- Extension of above... why did we get away from running the football with our running backs?  When the offense seemed mired in the 3rd quarter (odd to say considering we scored 36...) we seemed to out-think ourselves.  I have no problem with us running the ball until someone stops it.  The stat sheet will show 50 carries... but 21 were from the QBs, which to me, is about 5-10 too many.  With the backs we have, they need to touch the football more.  The stat sheet will also show 149 yards rushing, but that also includes those huge losses on the bad snaps...  The team compiled 222 yards on the ground before you subtract 42 yards in losses from the QBs on those snaps.  We ran the ball extremely well today.

- Ok, I know that Dave is likely going to give Moosman a fair amount of attention in his breakdown, so I will focus on the one part that I had a big problem with.  Don't get into the habit of trying to quick snap for the offsides, we don't need to do that.  I'm going to operate under the optimistic notion that they will do nothing but have him snap the football for the next week.

- Denard Robinson lead a very nice drive down the field, couple of very solid throws as well, 2/3 for 39 yards.  He just always looks like he could bust one.  I really like this kid, he's going to just continue to get better.

- Tate Forcier, is still a freshman, and he is still eight shades of awesome, but not above some criticism.  He had a few more plays today where he really just needs to either get rid of the football or take the sack, he'll continue to learn, but that pick and the intentional grounding were both huge mental mistakes that were costly, and we were fortunate to not give up more points off of them.  That nonsense out of the way.... the 4th quarter heroics were incredible, with the game on the line, he came through huge again.  The scramble for the TD and then a perfect throw to Martavious Odoms for the game winner.  He was dead on the mark and also had a key scramble earlier in the final drive to pick up 3rd and 4.  Also, he's clearly dinged up, hopefully not too bad.

- Martavious continues to keep making enormous plays for this team, can't say enough about him.

- Today was one of the first times where I thought Brandon Minor looked to be missing a step, he's not gimpy by any means, but he doesn't have the same explosion through to the second level.

- Kevin Grady with a couple of clutch plays to pick up first downs and enough of a block to get Tate into the endzone on the first TD of the 4th quarter.

- Why are we seeing Martell Webb more than Kevin Koger?  Can anyone explain this?

- Can someone please get Junior Hemingway involved in the game again?  Please?

- Ok first the good... no really there is some!  Believe it or not, the defense held IU to 3 for 15 on 3rd downs.  Also, they managed to force five field goal attempts, several following quick changes where Indiana started with great field position.  Also, the Wolverine D gave up 112 yards on 32 carries for 3.5 ypc... UNFORTUNATELY, the Hoosiers had one more carry for, um, 85 yards.  IU finished with 197 yards on the ground on 33 carries for an average of almost exactly 6 yards per carry.  Not good...

- Indiana's average starting position in the second quarter was the Michigan 42 yardline, and we held them to 3 FGs.

- More worrisome is the 270 yards we gave up through the air...  Soft cushions all day let Chappell pick us apart with underneath throws.  I'm not reassured given the fact that I typed that last sentence.  That said no passing TDs, and JT Floyd looked less lost than he did against Western.  I'm starting to think we're not going to see Justin Turner barring mass calamity.  I continue to be greatly concerned with how easily we give up the underneath crossing routes, just way too simple for offenses to hit.  Also, we need Boubacar Cissoko healthy.

- Big runs against the left side of our defense again...  We shifted into the exact D Indiana was hoping for on that big run, then blitzed to the wrong side.  Sigh.

- We have really struggled to get any kind of consistent pressure with the front 3 or 4...  That said, it's also readily apparent that people like Graham and Roh might as well have leashes on their jerseys because holding is not going to be called, much to my extreme consternation during the game.

- Really nice sack by Ryan Van Bergen, that might get lost in all of the "WOE IS US!" about the defense that we're certain to read this week.

- Only saw a little of Greg Banks and I believe none of Renaldo Sagesse, not sure why.

- Jordan Kovacs took a poor angle on that big run, but other than that I thought the safeties did a nice job being unnoticeable again today.

- Some are forgetting themselves and grumbling about the punt returns...  STOP.  Are we catching the football and not turning it over?  Then don't change a single thing, lest you forget the torture that was our special teams last year.

- Stonum really attacks on kickoffs, clearly has a knack for it and had a couple of them yesterday that he nearly broke free on.

- First road game of the year against a State team that probably doesn't quite know which direction is up right now.  I'm really looking forward to seeing what we come up with for our game-plan this week.