Some bulletpoints from us at Maize n Brew regarding Saturday's 31-7 victory over Western.

- Five guys carried the football for five-plus attemtps: Robinson 11 for 74 yards, Brown 10 for 54 yards, Forcier 11 for 37 yards, Shaw 7 for 34 yards, and Smith 6 for 23 yards.  All in all Michigan tallied 242 yards on the ground without Brandon Minor playing a single snap.  That bests last year's best rushing performance, even without Robinson's electrifying run, we did a very solid job on the ground Saturday.

- Can't possibly say enough about how good Tate Forcier looked in this game: precise throws, good reads, showed the deep ball, the accuracy on the run, and the scramble ability that we all have been DYING to see at the QB position for the better part of a year.  The offense simply moved with him in there; if he doesn't lose his shoe on that first drive of the second half we go up 38-0.  Couldn't have possibly asked for a better performance from our quarterback, nevermind a true freshman playing in his first game.  One decision in particular that stuck out was on the drive that ended up being our lone field goal: rather than chucking the ball deep on third and long, Forcier took off and picked up enough yardage to put us into field goal range.

- Robinson was 100% as advertised, he's going to be something special.  The text that I attempted to send to Beauford and Dave after Denard set the field turf on fire was something along the lines of : "WAAAHAHAHAHAHAHAHAHAHAHAHAHA".  It didn't go through, thanks for nothing AT&T.  Speaking of Robinson, there were obvious moments where you could tell he's been on this team for only three and a half weeks, but he's only going to get more comfortable back there.  Tremendous performance (see what I did there?).

- We pedaled the offense big time in the second half, lots of guys got much needed experience, and we kept things pretty much under wraps once the game was in-hand.  Sure it would've been nice to put a "look at us" type of score up there, but after that first half performance I was thrilled to death anyways.

- Sheridian can't BUY a break.  Certainly a poor throw on the pick, but also a poor holding call negating his TD/down at the 6 inch line though too...

- In summary, at absolutely no point in time last year did our offense look this good, period. 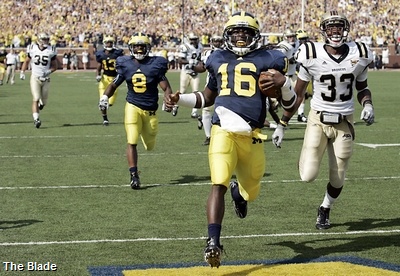 - You're not stopping Brandon Graham, Hiller did a good job getting rid of the football quickly, but Graham was a constant presence in the backfield.  He's going to be HUGE this week.

- Craig Roh showed flashes of why he's on the field as a true freshman as well, including a great sack. 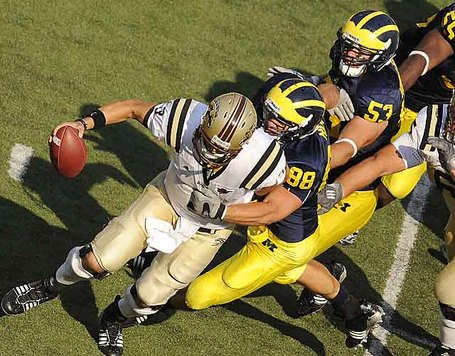 - We had to go ahead and have that one "flashback" moment where we got torched deep on the play-action... nobody's perfect but we have to put some serious time in on that this week.  Speaking of...

- Cissoko NEEDS to be healthy Saturday.

- Ezeh really looked a lot more comfortable flowing to the football, and Stevie Brown also seemed to be a MUCH better fit at his new spot.  Huzzah.

- Arg penalties, yes, yes it was the first game of the year, but 8 penalties for 72 yards (and one negating a 1st and goal at the 6 inch line) was too many.

- Greg Matthews back returning punts is a victory for logic and common-sense, don't change a damn thing.

- The kick coverage was somewhere between "great" and "stunningly competent" which I was over-joyed with.

- No player introductions over the PA system, they did it on the video boards, this meant no "WHO CARES!" chant, which was a shame.

- The Big House was noticeably louder, you could hear the echos off of the structures at the quieter moments, and when it ramped up it was an appreciable difference, can't wait to see it on Saturday.

- Yes, they piped in some RAWK music... it wasn't too often, but even once is too much no?

- We've waited a ridiculously long time for something like this, thanks team... GO BLUE! 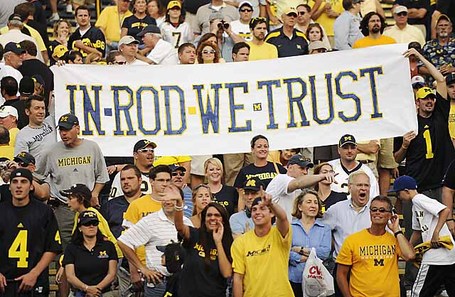 - Oh yeah, and one last thing: Bring on the Irish!