Share All sharing options for: Unit by Unit: Breaking Down Michigan Football's Defense Following Its Win Over Western Michigan

A new weekly post game feature here at Maize n Brew will be what we like to Unit by Unit. We'll take a hard look at the players and the coaches for each particular unit on the team, and bring them in for a pat on the back or a wag of the finger. After we've looked at each position, we'll give you a final wrap on the team's play on Offense and Defense (Special Teams too!). If you're looking for more detail, game bullets are here, the wrap up is here, the boxscore is here, and the general AP recap is here. There are the links, we've already broken down the Offense, so now let's take a good hard look at....

Michigan's defense deserves some significant praise for an outstanding game on Saturday. Save a garbage time touchdown pass, the Defense played outstanding football. Despite being advertised as a 3-4 defense, Robinson's boys showed a lot of 4-3 alignments, hammering Western at the point of attack. Even when the Wolverines switched back to a 3-4, they were just as dangerous, getting penetration and thumping Hiller. What was the most impressive thing was the improvement in tackling. No more one arm whiffs. Michigan wrapped up and drove through its tackles. Sure there will be a few misses that show up in MGoBlog’s UFR, but over all it was night and day from 2008. Just nine months removed from looking slow and confused the Wolverine Defense was fast and furious. Hat’s off to Greg Robinson and the coaching staff for an excellent game plan and some great fall coaching. 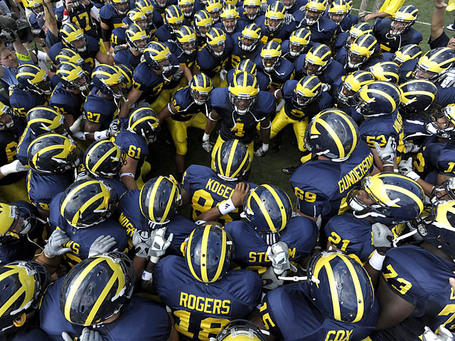 With just one returning starter on the line, Michigan fans were rightfully petrified of what would happen when their defense saw the field. Last year was, after all, the worst defense in school history and Michigan is now breaking in its third defensive coordinator in three years.

Only thing is, the Defensive Line was really, really good. The Wolverines terrorized Tim Hiller all game. Brandon Graham didn't register a sack, but spent his entire afternoon introducing Mr. Hiller to the field turf, face first. Mike Martin was even better than advertised, clogging the middle of the line, penetrating into the pocket and disrupting plays. At one point Martin blew through the line and pancaked poor Tim Hiller before he had a chance to realize that an angry 300 pound man was approaching him. Both veterans were awesome. Want a kick ass stat? At halftime Western had just 2 rushing yards on 11 attempts. That’s a 0.2 YPC. How awesome is that? Overall, the line limited Western and its 2008 1000 yard rusher to just 38 total yards on the ground.

(More breakdown of the Michigan Defense after the jump.....)

Surprisingly, it wasn’t just the veteran linemen getting into the act. Brandon Herron, Ryan Van Bergen and Craig Roh were all over the offensive backfield, tallying 11 tackles and 2 TFL between them. A minor surprise amidst all the bigger ones was that Craig Roh (#88 at left) earned the start at the "hybrid" linebacker/DL position. Frankly, the kid was just as good as advertised in the pass rush. I was stunned to see him bull rush and flatten just about everyone who got in his way to the quarterback. What also surprised me is his discipline. He wasn’t just rushing the passer, he was stopping the run. It’s hard to get too excited about any player after a single game, but when he gets a full season in a college weight program he could really be something special. Even though he lost the starting nod to Roh, Brandon Herron looked fairly capable in the hybrid role. Herron got good penetration and was adequate manning his gaps. I didn’t see him out of position that often, and seemed to take on blockers without too much difficulty. Van Bergen looked pretty good as well, even if he was overshadowed a tad by Roh and Herron. Lining up as a hybrid DT/DE Van Bergen ate up two lineman at a time and still managed to get pressure on Hiller, meeting Roh at Hiller’s ribcage to split a sack.

I thought it was a great game from the Defense against a good offensive unit.

Like the Defensive Line, the linebacking corps was a pleasant surprise on Saturday. The surprise being they actually looked like they knew what they were doing. Put bluntly, these guys couldn't find their ass with a flashlight and a GPS last year. Saturday was an entirely different story.

On Saturday they were flying around the field. Stevie Brown looked like an entirely different player on Saturday. Good in coverage, good at the line of scrimmage. Obi Ezeh and Jonas Mouton were flying to the gaps, and unlike last year, they were the right gaps. Any over pursuit was limited. Assignments weren't blown. I thought Ezeh, in particular, shed blocks very, very well, and tackled in space better than I’ve ever seen this group do. They actually looked like they knew what they were doing. Compare this to ANY point last season. It's night and day. 20 tackles 1.5 TFL and a pick. And what a pick.

If you’re looking to nit pick, and I’m sure you are, you can say that Ezeh and Mouton aren’t aggressively filling some of their gaps. You can say that Brown is still undersized and will have some problems when larger, faster linemen get up on him. Even if you say all of that, it was still a pretty good game from the Linebackers.

As an added bonus, Michigan was able to play J.B. Fitzgerald a bit. Greg Robinson may not be a miracle worker. He may not be a savior. Hell, this could all fall apart tomorrow. But for one day, we saw the Michigan defense, and in particular, the linebacking play we expect out of Michigan. And Robinson deserves a lot of credit for that.

With the exception of a 73 yard screw up, the secondary played very well. Because Western couldn’t move the ball at all, Tim Hiller was left to chuck the ball all over the field. As best he could. 39 times. That’s a lot of passes in comparison to 24 rushing attempts. But when you look at the boxscore at the end of the game and see 263 yards in the air, you really don’t get a true picture of just how dominant the pass defense was.

At halftime Michigan had limited Western to 81 passing yards on 24 attempts and 13 completions. One of those incompletions was a pick. That’s less than 4 yards an attempt and less than 7 yards a completion. So the halftime stats tell a better, more accurate account of how the group fared.

Individually, I thought Boo Boo played the best game out of the corners. Granted my view was obscured by the TV and all the Kentucky fans stumbling into the hotel lobby from the Kentucky/Miami of Ohio game (I was at a hotel in Cincinnati directly across from Paul Brown Stadium [Kentucky won 49-0, BTW]), but Boo Boo looked gooooood. He was good in tight coverage, pressing the receivers and dropping back into zone. His pick, while simply being in the right place at the right time, was impressive because of how he handled it. He caught it awkwardly, but kept his balance and actually shifted the ball away from the contact side as if he was a running back. The kid is impressive. If he can stay healthy, I think we’ve got a great player back there. Thankfully, it also looks like he’s going to be healthy to play against Notre Dame.

On the other side, it’s not like Donovan Warren had a bad game. He was pretty impressive as well, generally matching up against Western’s best WR, Juan Nunez, and shutting him down. You’ve gotta knock him down to a B+ because of one legit PI call, one bad PI call, and losing his cool. Warren was great in coverage for the most part. But he’s going to have play under control against the Irish to be successful.

As for the safeties, I didn’t really notice them that much. After a year of saying "Oh my god, the safeties," this was a welcome change. Troy Woolfolk and Mike Williams only combined for 7 tackles, but the fact they didn’t have to make that many stops is a welcome change. The lone screwup was a fourth quarter 73 yard TD pass. Williams and Woolfolk got sucked up into the box on play action and JT Floyd (subbing in for the injured Cissoko) let Nunez get away from him. Play action was a bit of a bugaboo for Michigan last season, so I have to admit the fact that it worked to the tune of a long touchdown concerns me a little bit. But overall, the safeties were very good.

If there’s a "meh" aspect of the secondary’s game, it was Floyd giving up the long touchdown. Once J.T. Turner is ready, I have to imagine he’ll take over the nickel job/first corner off the bench job.

With the exception of Zoltan Mesko, Space Emperor, Special Teams was a total question mark. Who was going to return punts and kick offs? Who’s going to kick field goals? Can anyone hold onto the damn ball?

Those questions were answered, and answered well. Jason Olesnavage booted a 44 yard field goal on his first opportunity ever. That’s going to be huge going into the Notre Dame game. Special props to Greg Mathews for fielding punts and not dropping them. I thought Mathews actually showed some shiftiness in the return game when given a chance, but most importantly, he didn’t fumble. Finally, I thought the kick coverage was fairly good. 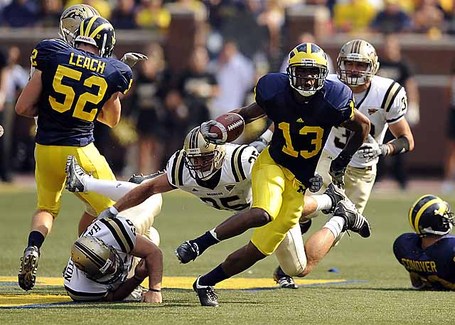 Overall, a great game all around from the Wolverines.