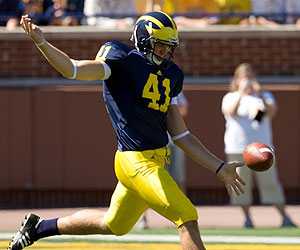 Zoltan, Hast Thou Left The Building?!

Oh Great Zoltan, Destroyer of Worlds and all things Laced in Leather, how greatly we will miss your lightning-bolt punts of fury that rained down relentlessly these last 4 years  upon our enemies!

Alas, you've left our college football world to enter the next - to valiantly wage new and glorious wars with impunity against Titans, Raiders, Vikings, Bears -  and perhaps most bravely of all - against new enemies called Packers and Texans.

All of your substitutes are green and inexperienced, but determined to attempt and emulate your epic greatness.

Do not forsake us, oh Zoltan! May your countenance of kicking perfection shine down upon the metatarsal bones of your replacements in 2010 and provide them superhuman strength and accuracy!

OK, so some of us Michigan fans aren't wrapped real tight anymore. I mean, after 3-9 and 5-7, you can't blame me for clasping at the ends of a frayed rope now and then. And some of us need to be loved, hugged and cared for, and well, just for somebody to come along and tell us that everything is going to be alright again.

This is especially true when we start talking about the 2010 football season, previewing the positions of Michigan's 2010 special teams, or just to explain away all of those crates of Pepto Bismol in the garage.

Overall Michigan had pretty decent special teams play last fall with respect to punting and placekicking, as well as kickoff and punt coverage.  Michigan did miss 4 field goals and 1 extra point (13 points) in 2009.  Maybe not a big deal until you start to consider things like a 2pt loss to Orange Bowl champion Iowa, a 2 pt loss at home to Purdue and a narrow win at home against Indiana's Pistol offense.

There's every reason to believe that Michigan's football team will again be embroiled in more nail-biting close games in 2010.  It's possible that 2010 special teams performance could be what either sinks or saves Michigan's season. This year some new faces will take over these important duties for the Wolverines.

Punting is such an unsung, yet critically important aspect of successful football teams at every level, from high school to the NFL. It's a good defensive weapon, because punting the ball deep moves opponent field position further away from your goal and forces your opponent's offense to travel greater lengths of the field to get the points they need to win.  It's an good offensive weapon too, because combined with (and assuming) solid play from your defensive unit, good punting performance can shift field position quickly in your team's favor, change the momentum of the game itself, and perhaps provide a much shorter field for your own offense to score more points and win.

Great defense, a solid kicking game, and a all-out war of field position.  It's all Chapter 1 stuff straight out ofWoody Hayes' (and hence Bo's) football Bible. I mean, who really needs all of that 100 octane, razzle-dazzle, Industrial Light and Magic, eye-candy offense, when it's possible to win football games decisively simply by kicking and tackling better than your opponents?

For the last 4 years Michigan fans have been rather spoiled with the reliable services of Zoltan Mesko as the team punter.  Here is a look again at Mesko's career performance at Michigan and comparing it with some of Michigan's finest punters ever:

Out with old punter:

Zoltan heads to the NFL to no doubt accomplish all cited in the prayer above.

In with the new punters:

Bryan Wright has been Michigan's kickoff specialist since the 2007 season. Kickoff performance is typically measured by touchbacks.  In 2007, Wright had 10 touchbacks of 60 kickoffs. He did not play but 4 games in 2008 (injury?), but in 2009 he recorded 13 touchbacks from 67 kickoffs. Wright will be a RS senior in 2010, but his position as kickoff specialist should see more competition from the likes of Brendan Gibbons and Royal Oak, MI native and 2009 walk-on Eddie Murray.

Replacing Zoltan Mesko at punter is a tall order any way you look at it. While Wright served as Mesko's backup for the last 3 years, and should get a seriously look again at starting punter for 2010, he'll be hounded by strong competition from true freshman Will Hagerup (Whitefish Bay HS, WFB, WI), RS freshman Brendan Gibbons, and possibly Eddie Murray also.  The risks of selecting freshman for this critical position are considerable, but with two losing seasons in the rear view mirror, and a critical 2010 season dead ahead, UM coaches will likely be weighting their decision more heavily on the factors of punting performance and consistency versus experience.

Placekicker Jason Olesnavage handled field goals and PATs for two full seasons for Michigan and overall did a pretty good job, hitting 73% on field goals and 98% on PATs for 75 pts in 2009. His performance:

Out with the old kicker:
PK Jason Olesnavage graduates in 2009.

In with the new kickers:

Placekicker will no doubt garner significant attention this off-season at at the April Spring Game. Michigan has to find a solid performer here.  With high credentials coming, Brendan Gibbons probably will likely get the nod at PK for field goals and extra points.  He was impressive in high school handling both placekicking and kickoff duties.  Gibbons will get some good competition from walk-on Eddie Murray, RS Sr. Scott Schrimscher (Catholic Central High, Canton, MI) as well as Kris Pauloski (Pike High School, Indianapolis, IN). Gibbons brings perhaps a smidgeon of  anger and a heavy dose of helmet spearing to the kicking position (reminding us of the famously vicious exploits of OLB/Punter from the class of '77, John Anderson):

Nice kick Mr. Gibbons. Now keep your head up, wrap your arms and drive through that tackle.

OK, so duh. Solid special teams play is essential every year. With known weaknesses on defense, Michigan needs to score as many points as it can, be it 3 points or the full 7 points - and as often as possible. And since the UM defense will be again young and largely inexperienced in parts this fall, the Wolverines will need all its leg power to pin opponents deep forcing them to earn their points by traveling maximum field distances.

Michigan's new kickers might be very young,  but all appear to have the  combination of skill and talent required to deliver. There will be serious competition at each position, which should please the Michigan coaches this autumn and bring out the best performances.