Coming off of a disheartening loss to Michigan State, sources inside Schembechler Hall have confirmed with us that Michigan's offensive and defensive coaches have re-doubled their efforts to prepare the Wolverines for their critical midseason showdown with the #14 Iowa Hawkeyes. Whereas the Spartans were still somewhat of an unknown commodity, the Hawkeyes are not. Featuring standout AMERICAN stars like Ricky Stanzi and Adrian Clayborn, the Michigan coaching staff has had their hands full trying to devise ways for their units to prepare for Iowa's big players and great schemes. Fortunately for you, dear reader, our spies have come back with specifics and photographs from Tuesday and Wednesday's practices, and we're here to let you in on some of the goings on from the practice field.

Obviously, with the ongoing struggles on defense and in the secondary, preparing to face Iowa's unpredictable Ricky Stanzi is quite the challenge. You never know where Stanzi's going to go. To compensate for this the coaching staff took a page out of SkyMall to find the perfect Stanzi impersonator 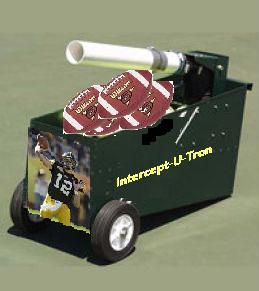 Behold, the Intercep-U-Tron. When set on the "random" setting, the Intercep-U-Tron is as close to the real Stanzi as you can get without draping it in an American flag. Regardless of the situation, it will randomly throw into triple coverage or find the wide open swing pass. Occasionally it'll pick off a bird, mid-flight. The Intercept-U-Tron allows Michigan's cornerbacks to practice against a strong armed QB but also prepares them for the inevitable pass that will be specifically targeted for their facemask, and teaches them to expect it.

But it's not just the Hawkeyes' air attack that the Michigan coaching staff is preparing for. Iowa's potent running game rests squarely on the shoulders of Adam Robinson, and don't think Michigan isn't aware of that. Michigan's biggest challenge will be to take Iowa's main running threat out of the game, and to do that the coaching staff brought in Jeff Gillooly to help train the players on "tackling" techniques. Gillooly's wealth of experience in the food service and body guarding industries, are already apparent in the equipment upgrades to the defensive linemen.

Linemen are being taught some new "tackling" techniques, focusing specifically on vital joints and fleshy areas. Hopefully it'll help to slow down the Hawkeyes' running game and allow the defense to get a stop or two.

On the other side of the ball, Michigan is using some surprising walk-ons to prepare for the monstrosity that is Adrian Clayborn. Lining up against the tackles and guards over the last few days has been the Stay Puft Marshmallow Man. A junior college transfer, Stay-Puft was once a five star recruit out of a parallel universe, who is sitting out the required red-shirt transfer year. With the size and girth of Clayborn, the offensive line has had it's hands full prepping for Iowa's All-American. To his credit, though he can't get out o the field, Stay Puft has really taken on his role with a gusto. 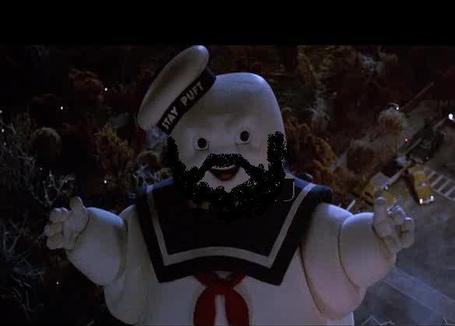 Rockin' the beard, Puft-daddy is doing everything he can to help the Wolverines prepare for Iowa. Sadly, no nuclear accelerators will be allowed on the field come game time, so this may hinder Michigan's ability to slow Clayborn who is bigger and faster than Stay Puft. But hey, it's a start.

Finally, to prepare for Tyler Sash, Iowa's ball hawking safety, Michigan is having Denard Robinson practice not throwing the ball to the other team. The coaching staff is hopeful this will be beneficial come Saturday.