The Slate Now Lives in A Van Down By The River: A Look at Your Big Ten Football Games for Week 8

Share All sharing options for: The Slate Now Lives in A Van Down By The River: A Look at Your Big Ten Football Games for Week 8

Every week we run down every game in the Big Ten for the coming Saturday. Usually we're right, but most of the time we're wrong. Wait... no... that's right. We've watched an insane amount of football so far this year and five weeks into the season we're starting to see some trends among the Big Ten teams. So with this lack of knowledge we try to pick the slate of games for the coming week. The one thing we do know is that Tim Brewster is gone. And that makes us sad. Hopefully he can drive his home to greener pastures. Here, enjoy our ignorance and leave your predictions in the comments.

Sorry. MSU has to win this game to prove that it's a different team than the prior years, because this is sandwiched in between State's two biggest games of the year, Michigan and Iowa. On the other side, Northwestern needs this game too. The Cats raced out to a 5-0 start only to fumble and shank their way to a miserable loss to Purdue, despite almost doubling the Boilermakers' yardage. It's a home game, it's a chance to ruin Sparty's season, and it's a chance show that the Cats are becoming a legitimate force in the conference. Me? I don't think Northwestern's got the horses to win this one. MSU's a very good football team and they're deep. I think MSU stumbles, but just not enough for Northwestern to pull this one off. MSU wins by 14.

Purdue at #10 Ohio State  - Don't look now, but Purdue is 4-2 and 2-0 in conference. Are you kidding me? Someone explain to me how Danny Hope, a guy who is inherited a program that was talent deficient and frankly not very good, has six Big Ten conference wins. Maybe it's time to recognize that he might actually be a good football coach. But, that said, it's also time to recognize that Purdue's schedule gets really f-ing hard from here forward, starting with Ohio State. The Boilermakers are the only team in the conference that can make Penn State look healthy, and they're starting their third string quarterback and tailback. Normally, you'd say that the only things Purdue can hang its hopes on would be are Ryan Kerrigan and the fact they took Ohio State behind the woodshed last season. And those aren't things to overlook.

But Ohio State was flat out WHIPPED by Wisconsin last Saturday. Their defense couldn't stop Wisconsin's running game, and what is Pudue going to do? Hint: It's not throwing the ball. Purdue has a chance in this game because they always have a chance in this game. They've proven to be a gigantic thorn in OSU's side over the last few years and they're catching OSU at their lowest point in the season. Even so, OSU's just too talented. I think Tressel hangs 40 on Purdue in a sort of statement game, the same way Wisconsin bounced back from the MSU game to throttle the Buckeyes. Purude's offense puts up some surprising rushing numbers, scores a few points, but Ohio State wins this by three scores

Michigan at Bye Week  - The Bye Week passes for 340+ yards and six scores. Denard Robinson gets injured midway through the second and misses a series or two. The cameras pan to Rich Rodriguez doing this. 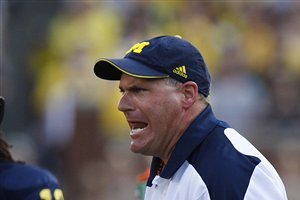 Michigan's pass defense is shredded by the Bye Week and has trouble containing the Bye Week's running game. Michigan eeks out a close fought battle against the Bye Week, 63- 56.

#13 Wisconsin at #15 Iowa  - Yay! The grain alcohol bowl! Wooo! All joking aside, this will easily be the best matchup of the weekend. Wisconsin's power run game against Iowa's dominant defensive line. Iowa's StanziNation against the Badger's rabid defense. After watching Adam Robinson bounce off tackles against Michigan, normally I'd be inclined to think that Iowa will be able to run the ball on the Badgers. But no, I'm not going there. Robinson performed adequately against a lousy rush defense and I think Iowa's going to struggle running the football. Where I might feel that Wisconsin finally looks like the balanced, powerful road grader I predicted they'd be at the start of the season, they're not playing at night, at home on Saturday. Wisconsin under Beilema has struggled on the road, unless they're playing in Florida. I don't rust trust  this team at all. On paper they should've smoked MSU and instead they were burried alive. I also don't trust the Badger's pass defense against Ricky Stanzi, Derrell Johnson-Koulianos and Marvin McNutt. I figure this game goes the same way as the Michigan State Wisconsin game. Wisconsin struggles on the road, John Clay and James White both come close to (but don't top) 100 yards, Stanzi throws for three TDs and a pick, and Scott Tolzien struggles against Tyler Sash and Iowa's defensive line. Pretty much the Michigan State game, expect it will be much closer in reality than the State game was. Iowa wins this one by 7, but it's as close as the margin. 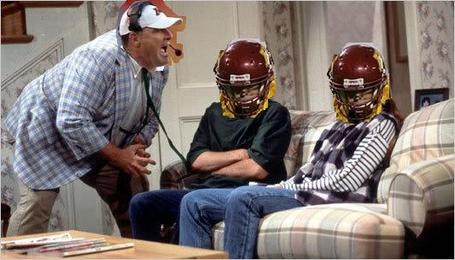 With Brewster gone, no longer calling the plays, and generally being a total fuck up, Minnesota has a real chance in this game. I actually mean that. It doesn't mean that Minnesota will win. I'm not that crazy. But they'll play inspired. Or they'll lie down like a Amsterdam hooker. One or the other. Penn State is coming off a bye week, but their still not healthy, minus their best defensive player and minus their offensive line. I think Minnesota moves the ball fairly well through the air, but does it's usual red zone turnover fest and drops this one by two scores.

Indiana at Illinois- This one could be very interesting. Illinois gacked up threee interceptions against MSU and made enough mistakes to fill the first half of the season in that game. Indiana is coming off a nail biter against, wait for it, wait for it, Arkansas State. In the fourth quater alone there were 37 points! 20 of those points came from Indiana's Sun Belt visitor and the Hoosiers eeked out a 36-34 win. I really don't know how this one will turn out. Illinois' defense is good, but not great, and I think that Indiana will be able to score a couple of touchdowns. Illinois' has shown a propensity to rack up some yardage, but it's not a jugernaught by any stretch. I think the Illini are on the upswing overall and the should be able to take the Hoosiers at home. I'll go with Illinois by 4.