Share All sharing options for: Preview: Michigan vs. BYE

You probably thought, oh hey - there's no game this weekend, so there's nothing to preview.  Well you thought WRONG, my friend.  DON'T SLEEP ON THE MNB PREVIEW CAUSE THAT SH&% DON'T SLEEP.  Michigan currently holds a 120-1 record against bye, with the only loss coming in the 2008 season.  If you'll recall, Nick Sheridan threw three interceptions, setting a new record in Michigan infamy against teams that don't actually exist as BYE went on to win 17-3.  Yes, the kicker showed up as well.  Full pads.  Nobody in the stadium.  I blame Rodriguez.

Michigan will work to put that loss firmly in the rearview as they travel to neverland to play BYE this week.  Vegas has Michigan laying 4.5 points on the road, so at least we're favored. 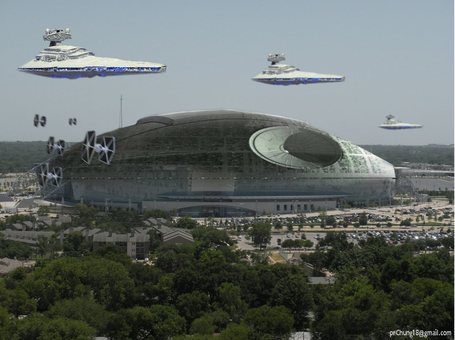 BYE looks to have significant homefield advantage, as they play in a stadium that is part of the coolest star wars fan-fiction art that I've ever seen.

As I mentioned before, BYE has lost repeatedly to Michigan throughout their history, with the one exception being the aforementioned horror in 2008.  In fact, BYE has only two victories throughout their history, with the other being against Tim Brewster's Gophers leading to his termination as the head coach of that program.  BYE has one of the most unique schedules in college football, playing literally every team in all divisions of NCAA football.  Despite what would look like several winnable games against programs like Ball State, BYE seems to lose every week in the same way; the other team doesn't show up to the stadium and therefore wins by default.  A notable exception this season came when Les Miles of LSU showed up to play BYE and just barely got his imaginary kicking team onto the field before time expired after inexplicably calling all 6 allotted time outs for the game in the first quarter in an attempt to ice the BYE kicker during the opening kickoff.  LSU won 3-0 on the last second field goal, but MAN does that guy have balls.

Preview continues after the jump!

The BYE offense has been stagnant this season, which should allow Rodriguez to rest most of his defensive starters.  Nose tackle/defensive end Mike Martin is particularly in need of the rest as he nurses an ankle injury that kept him from being effective and/or playing against Iowa:

David Molk and Mike Martin, anchors of their offensive and defensive lines, respectively, missed most of Saturday’s 38-28 loss to Iowa with ankle injuries.

Rodriguez, in game planning against BYE, has told both players not to show up, and to get healthy for the next game against Penn State.  FWIW he expects both to be back for that game.  Offensively, Rodriguez is also pleased not to have to play Denard Robinson as he has been nursing a "rotator cuff type sprain" that kept him on the sideline during the 2nd half of the game against Iowa.  He does, however, expect Denard to be ready for a hypothetical game:

If there was a hypothetical game this upcoming Saturday, Rodriguez said he felt like Robinson would be ready to play

If Michigan shows up ready to play, we've got bigger problems than we think.  There is no way that this team loses against BYE as long as they stay home and get healthy.  My prediction is that Michigan will do just that, thus ensuring another victory against BYE.

Obi Ezeh vs. Not Coming to the Stadium:  If there is one player who will be gaurenteed to be out of position, it will be Ezeh.

Molk, Martin, Denard vs. Getting Healthy:  Michigan needs Molk and Martin to be 100% before they take on the rest of their schedule

Michigan fans vs. Wait, There's Nothing to Worry About This Week:  Maybe go outside this Saturday?  You haven't seen sunlight these past two weekends...

I was at a bar last night with MnB Dave and tried some beer from Bell's.  I enjoyed in immensely, and suggest you do the same.

You know that Netflix movie you've had for a month and need to watch even though you know you won't enjoy it but you need to get to the next movie in your queue?  Watch that.

Green baby.  First time since Lloyd was on the sideline.

You should really get outside.  You're looking a little pale.