On Tap: Your Friday Drinking Instructions Don't Have A Bye Week, Are Getting Surly

Share All sharing options for: On Tap: Your Friday Drinking Instructions Don't Have A Bye Week, Are Getting Surly

With Michigan on the sidelines and on the mend for the weekend we, too, are given the opportunity to nurse our wounds and get back to full strength...so naturally we chose to eschew that in favor of drinking even more heavily than normal.  Today we have not one, but two beer selections for your weekend imbibing (because what else are you going to do with that free time?)  And before you scold us for our flippant attitude towards drinking let us remind you that we have medical expertise on our side and like everyone in the medical profession, we don't mess around by wasting your time

Your Friday Drinking Instructions: A Coping Mechanism in Two Parts

Part 1: In Which At Least You Are Not The Other Guy

Tim Brewster's hilariously bad run as head football coach at The University of Minnesota came to an end with a spectacular splat! shortly after the LOLphers lost to a Purdue team which may or may not have an offense.  For those who point to Rich Rodriguez's failures against Michigan's traditional rivals, he has at least produced against Notre Dame...twice!  Under Brewster's "leadership", Minnesota was a whopping 0-9 vs. the Gophers' trophy game rivals, Iowa, Wisconsin and Michigan (although I would be remiss not to mention that excellent BHGP poster, Bucketofchicken, pointed out that Brewster finally figured out how to get the Axe last weekend...) 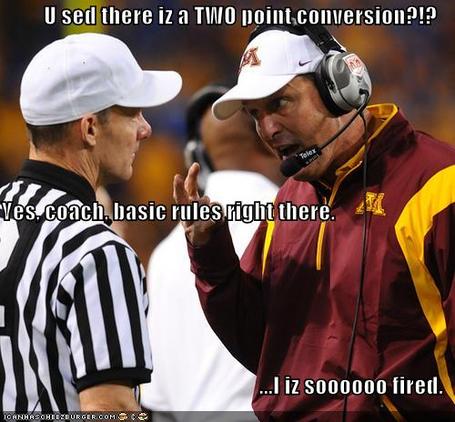 Additionally, while Rich Rodriguez has taken heat for dropping a ton of Big Ten games, his only truly embarrassing loss was the infamous '08 Toledo game.  Meanwhile, Tourettes Timmy was writing the book on program-crushing defeats with multiple defeats to MAC schools, a loss at a Sun Belt opponent (haha, home-and-homes with non-AQ = FAIL) and defeats to FCS schools from both the Northern and Southern halves of the Dakota Territory.  Needless to say, folks in the Gopher State are feeling uncharacteristically dour about the whole thing.  One might even say...

Surly!  From Brooklyn Center, MN, YFDI presents Surly Brewing Co.'s Surlyfest.  Sure, Oktoberfests are largely out of season at this point, but for a program that has spent the better part of a century looking back at past glory, it seems fitting to feature a beer whose best days are behind it.  In fairness to this beer, though, there's absolutely nothing that says "past its peak".  This may be about the boldest thing we've proclaimed on this site, but damn if this isn't one of the finest examples of this style we've had the pleasure of sipping, regardless of country of origin.  That it comes in a can is all the better.

[Contrary to popular belief, cans are not an assurance that the liquid contained within is of poor quality.  It just so happens that only beers of poor quality had been available in cans up until recently.  With more and more craft brewers turning to cans (more on this in a bit) public perception is beginning to shift towards an acceptance of the format.  Ska, Capital, Half Acre, Oskar Blues and Surly are just a few of the reputable breweries turning to cans.

Why cans?  We're glad you asked.  While canning can do nothing to protect beer from two of its most damaging influences, temperature and age, it can (get it) eliminate the third destructive element; light exposure.  Bottles are simply inadequate at keeping out the harmful UV rays which break down the molecules within your beer that makeit yummy.

Clear bottles? Obviously crap.  Less obvious are green bottles which surprisingly provide the same weak coverage as their clear peers.  Brown helps a little more but at the end of the day you can still see through that thing.  So that brings us cans.  While it's obvious that no bit of light is getting through the aluminum, what of its ill effects?  Won't the beer taste metallic?

Short answer: no.  The reason beer from a can tastes metallic to so many who have drunk canned beer is because they are drinking from the can.  The craft brewers spending money on canning almost all print something to the effect of "to be poured into a glass".  If your mouth isn't on metal it should be free of any unsavory flavor.  Another less obvious benefit of cans is that they are much more environmentally friendly.  Cans weigh roughly 1/8 of what a bottle does requiring less fuel to get the same amount of product from place to place.  End of learning...]

Sadly for so many on this site, Surly is currently only available in Minnesota (they have been in and out of the Chicago market on draught for a few years).  Unlike Minnesota football, though, we advise you do everything you can to be on the lookout for it.