New From Maize n Brew Industries: Would You Rather? 2010 College Football Edition!

Share All sharing options for: New From Maize n Brew Industries: Would You Rather? 2010 College Football Edition!

Tired of the same old game of Charades? Sick of it when your friend/significant other/spouse/indentured servant can't figure out that it's a "&^%ING DUCK!" when you play pictionary? Does it get boring when you're stuck playing the 1987 version of Trivial Pursuit where your sister has memorized the answer to every card so that it feels like you're stuck in Groundhog Day watching Jeopardy? Has Russian Roulette robbed you of too many friends (but not their money)?

Well, Maize n Brew Industries of Pyongyang, North Korea, has the answer to your entertainment needs! Presenting the 2010 version of Would You Rather? College Football Edition! 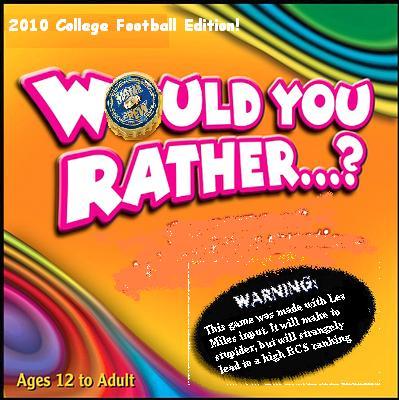 This year's edition has been updated with all kinds of fun College Football facts and scenarios! Just take a look at some of this year's questions!

More fun Would You Rather questions!

And that's only part of the fun! Check it out today and leave your "would you rather's" in the comment section!