On Tap: Your Friday Drinking Instructions Are Going Head-To-Head

Share All sharing options for: On Tap: Your Friday Drinking Instructions Are Going Head-To-Head

The oldest of the old guard meets the poster child for Nu Skool in Happy Valley this weekend (in football terms at least; the Wilford Brimley/Lady Gaga cage match is scheduled for next February in Vegas).  In Joe Paterno and Rich Rodriguez we have two coaches who are under fire for not being, well, each other.  Paterno has been shredded for not knowing how to evolve and for falling behind in the cut-throat world of new-media recruiting while RichRod is oft maligned for his infatuation with modern schemes and raw athletic ability while eschewing the fundamentals of the game.  However, despite their flaws both of these men are held in high esteem because of the positives that surround them.   In fact, upon closer inspection, both of these men bring a staggering number of positives to the table, it's just difficult to see them clearly in this world of www.Fire______Now.com websites and the 10,000-monkeys-with-typewriters culture of the blogosphere (hey, wait a minute...).  So without further ado, let's get to our main event.  It's young v. old, it's brash v. wise, it's injured v. addled...Let's get it on!

There have been superlatives-a-plenty thrown in the direction of Joe Paterno over the years.  He's undeniably old hard-to-kill unequaled in his experience.  He's shown unrivaled strength in times of adversity, weathering a bevy of storms surrounding his capabilities only to bounce back time and again with big-time results, reminding all of us why he's JoePa to begin with.   And in so many ways he is the standard against which young coaches hold themselves to when trying to build a program the right way.  With that in mind, in the Blue Corner, YFDI presents, from Fort Bragg, CA, North Coast Brewing Co.'s Old Rasputin! 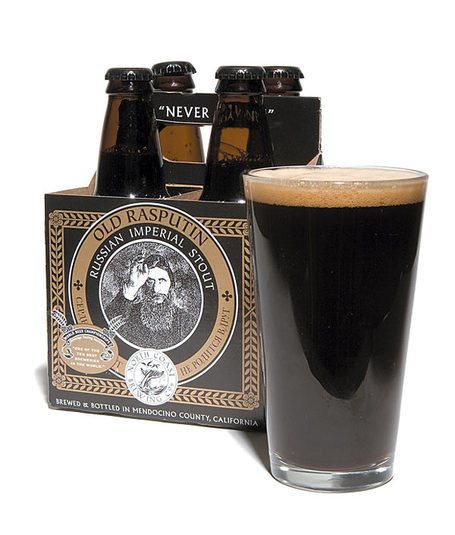 Old Rasputin is to beer in many ways what Joe Paterno is to football.  It is a bonafide original of the American brewing scene.  There were essentially no beers like it on the American brewing landscape when it first arrived as few thought the style would have any viability in a world of light, fizzy lagers and mildly hopped, polite ales.  At 9% ABV, inky black and bursting at the seems with flavors of chocolate, coffee and smoke, Old Rasputin changed the rules.  As more and more brewers took their first sips of OR they began to see the almost limitless possibilities of the style and, hence, the original has been surpassed by many in terms of strength, taste and innovation.  However, there will always only be one Old Rasputin...need we make the comparison?

LEARNING DISCLAIMER: SKIP TO THE NEXT MARKER FOR MORE PITHY COMMENTARY!

First things first; Old Rasputin is a Russian Imperial Stout, a name which traces its origins not to the first word of that title but rather the second.  As the world's foremost power, the United Kingdom set the brewing trends for the Western World in the 18th Century.  Casks of English ale were sent the world over, finding converts at every stop. However, one particular entity held out against British endeavors in alcoholic commerce: the Russian Court of Catherine the Great.  Three particular obstacles factored into this equation:

The age factor was the easiest of the issues to remedy as the British had already found that through drastically increasing the hop content the natural preservatives contained within significantly lengthened the lifespan of a beer (which is how we came to get the India Pale Ale, but that's a story for another time).  The first and third problems were killed with the same stone; part of what makes hard spirits the beverage of choice in so many cold climates is that higher alcohol drinks don't freeze as easily.  While brewing beer at an ABV high enough to resist freezing is all but impossible (although there are those trying to [sadly] change that) the higher that number goes the more resistant to icing over that beverage becomes.  Thus, the beer in question was made by upping the malt content (more fermentable sugars = more potential for booze) to levels then unheard of.

Rich Rodriguez is many things, but uncreative or mild-mannered are not on that list.  He is an innovator, energetic and, whether you agree with them or not, committed to his own set of principles.  Up to this point it has worked everywhere.  The one thing folks seem to forget is that at each of those stops there has been a period of adjustment while everyone took time to get on the same page.  While Rod's system looks effortless when run correctly, its construct is anything but simple.  To that end, let us introduce to you, in the Maize Corner, from Cloverdale, CA, Bear Republic Brewery's Hop Rod Rye (warning: BRB's website is every bit as rudimentary as their beers are sophisticated): 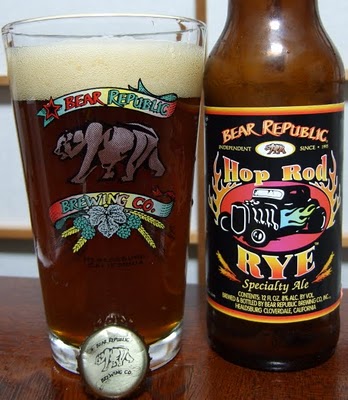 Aside from the fact that the beer in question has the word "Rod" in it, Hop Rod Rye works as a metaphor for RichRod in several ways.  Rye beers are at once not for everyone and yet easy to fall in love with once you get used to them.  Rye (it of the bread and the grain alcohol) has a distinctly dry character.  On its own rye can be a bit much to handle but when used judiciously and in the right circumstances it can take a beer from good to great.  Typically rye finds its best partner in beers that beforehand would simply be highly-hopped IPAs with a sweeter malt profile.

The rye, with its unmistakable earthy, dry bite counters both the bitterness and sweetness of such beers.  We would dare say that when utilized correctly they can be amongst the finest beers out there.  In the world of West Coast IPAs, a RyePA (get it) was a shock to the system...think RichRod's entrance into the largely staid fraternity of Big Ten coaches.  The MO is pretty much the same plan for the Michigan football program; UM football under Carr = strong but indistinguishable from other similar programs, UM football under Rodriguez = (hopefully) strong and ahead of the pack.  Plus, there's a Bear on the label, and what's more badass than a GODLESS KILLING MACHINE!!!

So in the end which of these two titans wins out?  The tried and true original or the upstart innovator?  This Saturday may or may not give us a glimpse into which end of the spectrum will win out in the end, but this Friday should prove an even tougher decision as to which beer you should take home with you.  Hell, why not just have them both?

As always, go forth and drink!

*No, it is not lost on us that we have compared JoePa to both the Imperial Japanese and Vile Russians in the same post.