Nothing Slows a TD Catch Like a Brick Wall: All Sorts of Surprises in Store for Illinois Northwestern at Wrigley

Share All sharing options for: Nothing Slows a TD Catch Like a Brick Wall: All Sorts of Surprises in Store for Illinois Northwestern at Wrigley

Let me put this gently. Someone is going to die in the east endzone of the All-State Wrigleyville Football Classic. How do I know this? Uhhh... this picture. 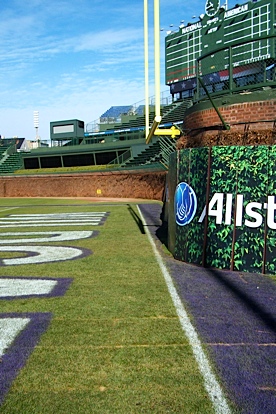 Oh man. It's going to be awesome. I can see it now, fade to the back of the endzone and then.... fade to black. This just will not end well. The NCAA's insatiable lust for dolla dolla bills y'all has turned our beloved game into arena football. Even so, I'm willing to forgive. Face it folks, one of the most exciting things about football is the injuries. You never know when you're going to see the next Protho, Theisman or this poor schmuck end their careers in a horrifying, gruesome way. Is it any coincidence that All-State Insurance is sponsoring this and making the game of miserable life threatening injuries, more dangerous? No. It's just a coincidence. Move on.

But an endzone wall made out of bricks isn't the only surprise All-State has for fans in the Wrigleyville Classic. Oh no. Maize n Brew has learned through a secret advertisers memo that there are surprises galore waiting for the fans and viewers this weekend. Here are just some of the classic pitfalls awaiting Northwestern and Illinois that we've learned of.

Live Tigers at the Twenty brought to you by the Visit India Tourism Board  -Think you want to get out of bounds to preserve the clock? Think again. Thanks to the Visit India Tourism Board, All-State is proud to announce that live Bengal Tigers have been flown in to roam the sidelines wherever the sideline markers have a two in front of them. We know the Tigers will keep the clock moving and give fans a great interactive experience as the two schools will choose one fan from the opponent's student section to feed to the Tigers. It's just a reminder that you never know what can happen on your next trip to India! Maybe see the Taj Mahal. Maybe see Bollywood. Maybe get eaten by a tiger. Maybe you should talk to your All-State representative about trip and life insurance. Hmmmm? 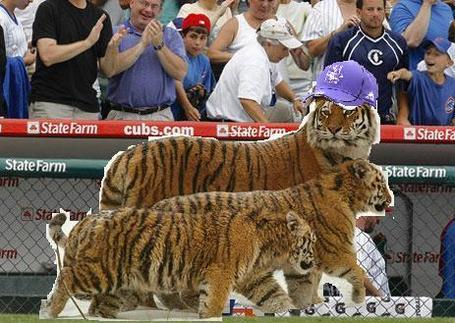 It ain't just Tigers folks, there's more in store after the jump.

The Degree Anti-Persperant Red Zone Pressure Pit  - A trip inside the Red Zone is pressure packed for any defense. If you break, you cost your team momentum. Well, the "stakes" are even higher now. Or lower depending on how you wnt to look at it. Well Degree is stepping up the pressure defenses... and offenses... will face this weekend at Wrigley. Somewhere within each team's redzones there will be a Burmese Tiger Pit waiting for someone to fall in. Just remember, real men who face the pressure don't sweat it. Even when they're about to fall into a board meeting or a pit full of razor sharp spikes. 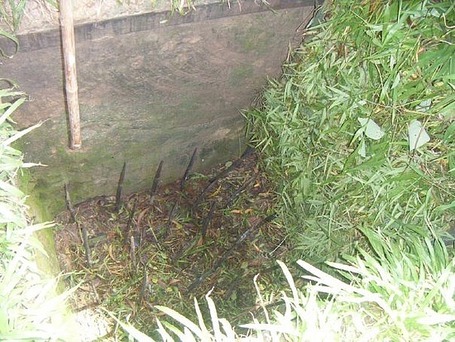 The DeWalt Offensive Buzzsaw  - A good offense cuts through a defense like a hot knife through butter, and that's what you get when you purchase the Game Ready DeWalt Circular Saw with Throat Guard Technology (TM). Forged with only the highest quality American Made Steel, DeWalt's Circular Saw will slice through even the toughest defenses... or offenses. Just like in the 1920's, a Supersized DeWalt Game Ready Circular Saw will rotate at the forties to help the offenses cut through the defenses. Or visa versa. 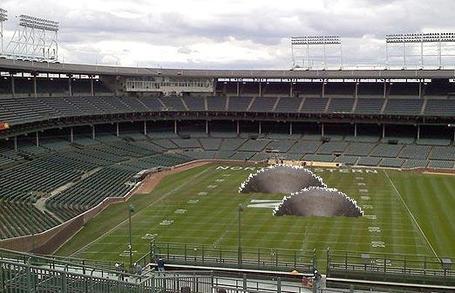 The Tums Acid Pit  - The game's tight. There are just 2 minutes on the clock. And now your stomach is acting up after that fifth bratwurst. You know what time it is. Tum-tum-tum-tum-tuuuuuuuums. If you've ever whated to know what the inside of your stomach looks like after you'vebeen to the ballpark, Tums is going to make that happen for you. As the secondary sponsor of the game, there will be a vat of acid placed underneath the Nothwestern "N" at midfield. To simulate the gigantic bleeding ulcer you've given yourself following this team and having all those extra hot peppers, there will be randomly timed eruptions of gastric acid from under the "N". The only way to get through it is... well... you know. TUMS! 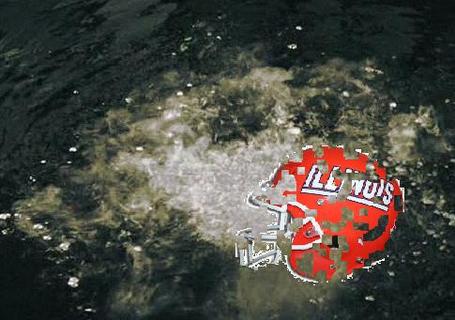 More suprises are in store kids! So tune in Saturday!