On Tap: Your Friday Drinking Instructions Thinks Waiting Is Overrated

Share All sharing options for: On Tap: Your Friday Drinking Instructions Thinks Waiting Is Overrated

It's Christams Eve.  You're 9 years old.  The excitement and anticipation inside your prepubescent head skull makes a Tesla Coil look dull (although the biking shorts in that picture would indicate otherwise) as the possibilities of the next day are too numerous, too awe-inspiring, too butt-tingling (yes, it's a thing) to comprehend.  It's a restless night as sleep doesn't come easily but when first light breaks through the frosted glass of the window you're as energized as ever, ready for the wonders that the day has in store.  You burst from your room, bee-line it to the Christmas tree and are met head-on by

Hours, days, weeks of waiting and for what?  A "how to" kit for the Furries lifestyle?  This is essentially what happened to the Iowa football team this season.  They waited all summer, believing that a big gift was coming their way if only they sat by and waited patiently.  And you know what?   Iowa got a bunny suit...awesome.  What a waste of time.  What a bust.  It's so bad that Qatar and Uzbekistan's national soccer teams got together recently to stage a recreation of the Iowa season up to this point just to hammer that home

It's perfect, really.  The goalie represents the Iowa 4th quarter defense while the striker is the special teams.  I guess Iowa football is bigger than just the Korean Market.

What the Hell are we on about?  Well, if your team had just had just been dealt the final blow to what was supposed to be a special year after months of anticipation then you would be on our wavelength.  At least Michigan is trending upwards (it's like night 6 of Chanukah for you guys).  Which is why YFDI says "why wait for Christmas"?  Don't sit on your ass waiting for December 25th and risk the let-down, make it a Joyeux Noel (this isn't BHGP, jingoism be damned) TODAY!  YFDI heads back to the Holiday Capital of the World, Cleveland, OH, to bring you Great Lakes Brewing Co.'s Christmas Ale. 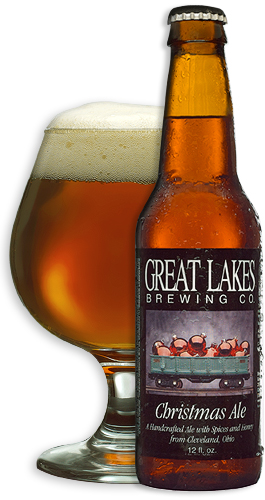 We'll keep this short and sweet   GL Christmas Ale is the one thing we look forward to every single year that never lets us down.  The description seems rather inauspicious; "...spiced with cinnamon, ginger, honey and yuletide cheer."  So it manages to sound at once a)like a baked good and b)stupid.  However, you will be the only thing stupid about this equation if you choose to stay away from this beauty (or if you have more than a few; it's 7.5% ABV).  This is really one of those instances where beer reminds you that, in a world dominated by hops, it's all about the malt.  The body of this beer is dense yet soft, rich yet smooth, and provides the perfect canvas for these ingredients to be applied.  The last time we introduced this beer to friends they both promptly went out and bought a case the next day.  Yes, it's that good.   And while some of the fresher points of the added spices may fade with time, the strength of the beer means that it will last a while, so stock up if you can.

So forget that we haven't even had the Evil Empire's Macy's Thanksgiving Day Parade yet.  Take the game to them!  If we were drinking Oktoberfests a month after they peaked then why can't we turn the clock forward?  Or you could just sit around and do nothing, hoping that Santa brings you everything thing you'd hoped for.