His Helmet Said It All

Share All sharing options for: His Helmet Said It All 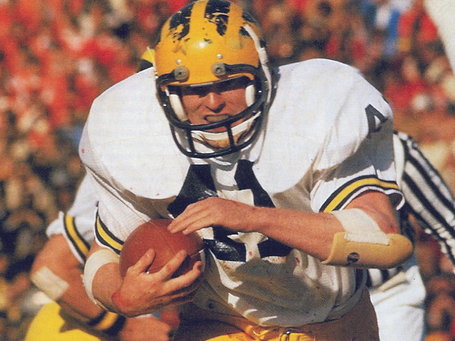 A long revered member of the Michigan football family was suddenly lost weekend to a heart attack - former Wolverine running back Rob Lytle.  We all send out heartfelt condolences to Rob's family and friends.

Lytle came to Michigan from Ross, OH (Fremont Ross High School) to play fullback for head coach Bo Schembechler in Ann Arbor in 1973.  After 3 years as a starter, Lytle graduated from the University of Michigan with a school record at the time gaining 3,307 rushing yards and 26 touchdowns.  As a senior in 1976 Lytle amassed 1,469 yards and 14 touchdowns, finishing 3rd in the Heisman balloting behind the late great USC tailback Ricky Bell and Pittsburgh tailback Tony Dorsett.

The first thing I will always remember about Rob Lytle was his physical toughness and versatility.   Lytle was not a big player - 6' 1" and 190 lbs. As a fullback Lytle was equally comfortable running the ball like a battering ram or blasting opposing defenders into the bleachers for his fellow tailbacks Gil Chapman (1974) and Gordon Bell (1975).  In 1975 Michigan's option-I offensive attack featured two 1,000 yards rushers in Gordon Bell and Rob Lytle. 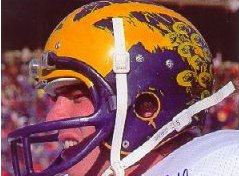 The second thing I will remember about Rob Lytle was his helmet.  He played alongside some really tough and mean customers like S Don Dufek, DT Greg "Mo" Morton, S Dwight Hicks and OLB Calvin O'Neal.  Most of these guys had Wolverine helmet awards completely covering the surface of their striped, winged, Michigan football helmet.  Lytle's Michigan helmet was loaded with helmet awards too, but he front of the helmet was a mess.  I mean, the Maize paint was all screwed up, scratched and blended.  Lytle's head covering was put through so much abuse, you couldn't tell where the Michigan wings ended and the stripes began.

As a young kid reading books about Michigan football in the 1970s, I thought that was cool.  And it was.  Rob Lytle was a great football player. He played the game with mental toughness and heart. reckless abandon.

But of course there always were and alwasys are things in life far more important than football.   Rob was only 56 when he passed away today.  He was young. His family and a huge circle of friends will no doubt miss him dearly.