A Very Thin Margin For Error: What It Really Takes For a Michigan Win

Share All sharing options for: A Very Thin Margin For Error: What It Really Takes For a Michigan Win

One of the common themes this season has been the progression of the offense, how well its played and how much it is capable of. But going into the season, we kinda knew it'd be this good. Third year in the system. Two veteran quarterbacks. A stacked offensive line. Michigan should be tearing it up on offense with those types of returning starters on offense and Rodriguez' penchant for ludicrous speed type offenses.

We also knew that Michigan's offense would have to cover for what looked to be a miserable defense. Once you got past the defensive line, you knew the defensive backfield was going to be a disaster. We knew it. We just chose to look past it early in the season because Michigan was putting up numbers like John Nash on amphetamines. And man, those numbers are pretty to look at aren't they.

Michigan currently ranks 4th in the country in total offense, 8th in rushing offense, and 43rd in passing offense. In terms of total offense, Michigan is racking up a mind boggling 518.38 yards per game. In other words... 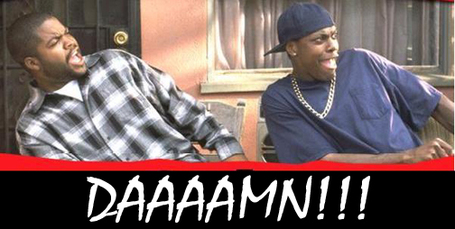 If you think Michigan's numbers are hyper-inflated by a 721 yard game against Baby Seal U, this season played by Bowling Green, well... you're wrong. That was my initial hypothesis, and it didn't work out that way. Taking out the BGSU game, the numbers are only slightly different. 29 yards a game different. Without the closer than it should've been win over BGSU, Michigan's offense is still churning out 489.47 yards per game which would drop them down to 9th in the country. Just behind Baylor. That's insane. Even without it's highest output of the year Michigan's offensive production would shatter any of it's prior yardage records by seasons end.

So if things are so rosy on offense, what's the deal with the title of this post? Believe it or not, Michigan's not putting up big enough numbers for them to win. Michigan has been outgained this year on three occasions and is 1-2, with the victory coming over the now obviously inept Notre Dame Fighting Irish. What's staggering is what is required out of the ground game for Michigan to win a football game.

That difference is borne out again in the total yardage numbers. In it's four legitimate wins, Michigan racked up a staggering 526 ypg. In it's three losses, that number dips to 440.6 ypg. That number by itself is still pretty staggering but the number opposite it, i.e. the Opponents ypg, is what will scare you.

What's frustrating here is that Michigan ran for 233 yards and passed for almost 200 against Penn State, and it still wasn't enough to win the game. We all know it's because of the defense's inability to stop anything, but because we know that it makes sense that we should know what it takes to win a football game in spite of that. The defense is awful. In Michigan's four legitimate wins, the defense is giving up 471.25 ypg. Twenty more than in losses. The saving grace has been the offense's herculean efforts to put up 526.

But that's a really thin margin for error in any league. The real numbers on the season (no BGSU) are frightening. Michigan gains 489.47 ypg while its opponents gain 462.71 ypg. That's a meager difference of ~26 yards. And that 26 yards is more often than not the difference between a win and a loss.

So where do we get these extra 26 yards? It ain't the passing game, at least not with Denard Robinsonunder center. While Denard is averaging 202.5 ypg passing in Michigan's losses, the only real spike in the passing game came when Tate Forciertook over in the Iowa game when the team put up 335 yards in the air on a season high 44 attempts. That by itself is an outlier because Michigan is only throwing the ball 27 times a game. Eyeballing the numbers (29, 44, 25 attempts in Michigan's losses with 215, 35, 190 in passing yards those games), maybe you could squeeze a little more blood out of that stone. The issue seems to be efficiency. In its wins Michigan is completing passes at a 69.5% clip. In its losses, and I maintain since Denard injured his shoulder, that number has dropped to 58.2%. We're throwing it more in our losses, we're just not throwing it well. As a result Michigan's passing yardage numbers in it's wins and losses are pretty much even.

The real barameter is the running game. Michigan's been held under 200 yards twice (MSU, Iowa), both were losses. Michigan's been held under 280 three times (throw in Penn State). And it's not because the Wolverines are running less. They're actually running at just about the same clip. Michigan is averaging 43 carries a game in its wins and in their losses they've rushed 34, 42 and 42 times. Michigan's running the ball just as much, they're just not getting as much out of it.

So what it comes down to is that Michigan needs to fins a better way of disguising its run plays and find creative ways to get yardage on the ground. Maybe a few more pass plays with run options. Any possible way to gain a few extra yards on the ground appears to be the difference between a W and L.

It seems insane to ask your offense to produce more than 440.6 ypg in order to secure a win, but that's what the numbers seem to bare out. It's just another example of just how thin the margin of error is for the 2010 Michigan Football Team is.