For a clue on what these are, please check out mgoblog's excellent running series of picture pages, wherein we dissect a single play in an attempt to see what the design of the play was, and why it succeeded or failed.

Today we're going to take a look at what I'm calling the "Bowl Eligibility Stack" but what some would call the "Awesome Formation" or, simply "The Freakout."  It starts with the coaching staff and bench players in a 2-48 formation, with Greg Robinson and Rich Rodriguez the only two out in front of the play, with unnamed grad assistant (in white shirt) flanking on the right side of the formation: 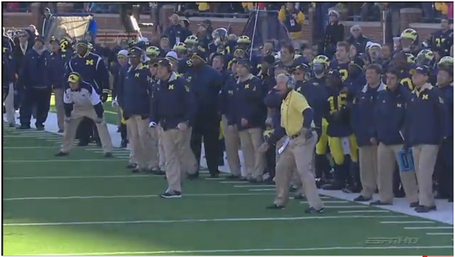 This formation allows for flexibility in the kind of front it creates.  As you can see, Greg Robinson maintains his position without his hand on the ground, which is irksome.  Despite actually allowing Craig Roh to be a defensive end throughout most of the game, he still has not learned that he himself will be much better suited in a 3-tech position.

As it becomes clear that Illinois is in trouble, you see the first sign of confusion in the Michigan formation, with unnamed grad assistant clearly jumping early and almost jinxing the whole thing: 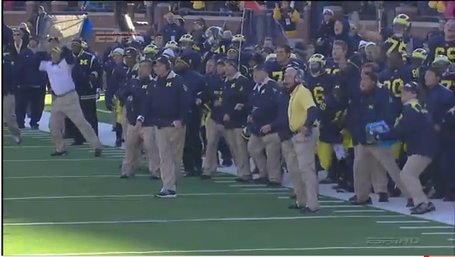 As you can see, not only is he early, but he's jumping out of the hole that he is supposed to cover on Rodriguez's right side, causing Devin Gardner (as you will see later) to have to step up into that hole at the expense of a member of the Michigan coaching staff.

As Illinois chucks it incomplete, you can see the result of unnamed Grad Assistant's error, a member of the Michigan coaching staff is taken down right in front of a charging Rich Rodriguez who is headed into the gap: 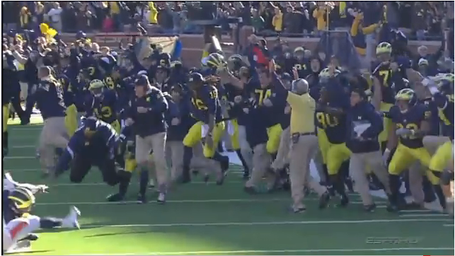 Rodriguez is now helpless as his fellow coach is airborn on a collision path.  So what happened here?  As unnamed Grad Assistant flew out of his assignment, you see the now-airborn coach and an inexperienced Devin Gardner charge through the same hole, knocking each other out of the play.  This is the kind of error that a young, inexperienced celebrator will make, and Michigan is certainly not short on those. 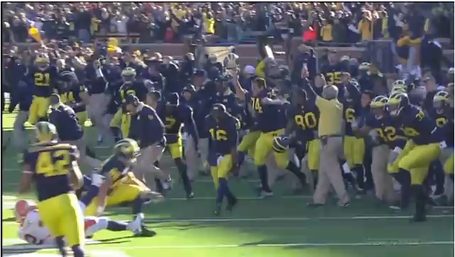 Here you can see Gardner trying to adjust his angle of attack, but the damage has already been done.  Both are now out of this play, and what's more are threatening to take Rodriguez to the ground as well.  The good news is that Denard Robinson has stepped up in place of a very confused Greg Robinson (now headed the opposite direction of the play) to seal off that side of the celebration.  This is where Rodriguez goes all Charles Woodson on this play: 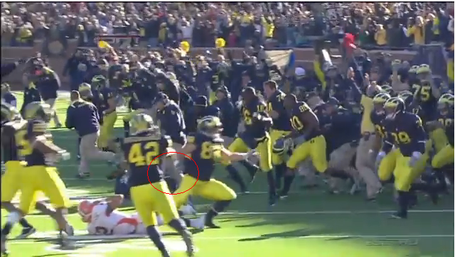 It's hard to see, but Rodriguez - in one of the more athletic plays I've seen Michigan make over these past 3 years - is leaping over the wreckage caused by Gardner via Unnamed Grad Assistant's early error.  If Rodriguez is taken to the ground here, the entire celebration blows up in Michigan's face.  Greg Robinson is so far out of position here it's laughable, as he has been overtaken by the majority of the Michigan celebration. 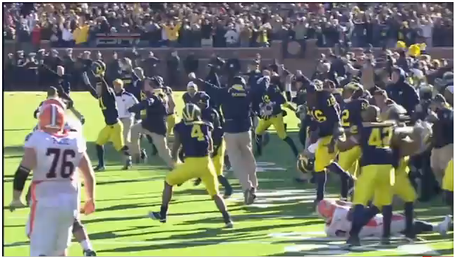 ...is a full on celebration.  Rodriguez has cleared the wreckage, and is being ably backed up by Denard Robinson.  Cam Gordon has come into the picture from the playside, and even Unnamed Grad Assistant is able to find his way back into the picture. 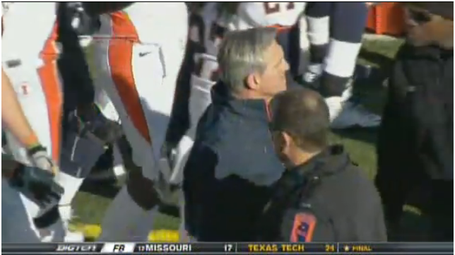 So what does this tell us?