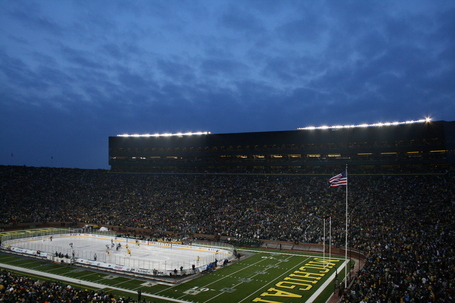 One of the hardest things about a BIG GAME is that the game so rarely lives up to the hype. The advertisements. The build-up. The anticipation. Then, usually, the bottom falls out of the match up or something happens that ruins the experience.

Not this time. Saturday was perfect.

Maybe it's some strange form of karma at work, but for everything that's gone wrong in the Big House this year everything went right on Saturday. The weather was cold, but not frigid. The skies were clear until game time and then clouded up just enough to preserve the ice and block the sun. The crowd was raucous but friendly. And the game was like it was scripted by the most partisan of Michigan screenwriters.

Michigan's first two goals were scored by John Merril, a freshman defenseman who committed to play hockey at Michigan as a 14 year old kid. Michigan's walk-on turned starting goalie Shawn Hunwick posted a shutout. Michigan controlled the flow and the puck for all but limited portions of the game. And senior captain Carl Hagelin netted two goals as Michigan crushed its in-state rival before the largest crowd ever to watch anything in the Big House. Not just a hockey game. Anything. For once, the fireworks that followed were appropriate. 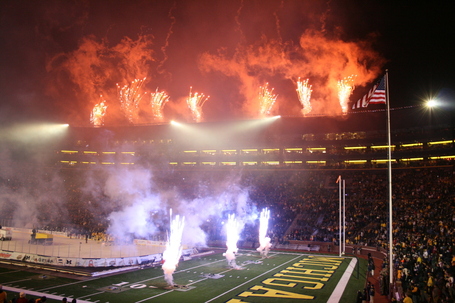 As I sat there, cold but not uncomfortable, it was hard not to be overcome by the moment. The smiles on the players and the fans seemed to radiate a kind of awe-struck joy that seems so rare in our society these days. For once the man made wonder we were witnessing wasn't a product of CGI or some cinematic special effects guru displayed on a giant screen in front of us. It was real. Tangible. And we were all a part of it.

It was an afternoon that will be difficult to replicate or even come close to. And I am glad to say that wasn't lost on the players. As the fireworks began to go off, you could see them dancing, smiling, generally goofing around, cognisant of the fact they would never be a part of something like this ever again in their lives. 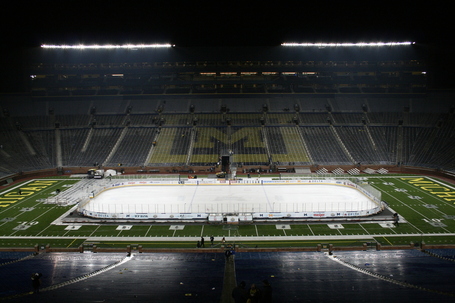