It Could Be Worse

Share All sharing options for: It Could Be Worse

You could call this the bowl season of our discontent.  An entire fan base waiting on the decision of it's exalted leader on the direction of the program in 2011 and beyond.  Will we stay the course for one more year with our underachieving offensive wizard of a head coach, or will we embrace everything that made Michigan Michigan for the last forty years and call up ol' Jimbo from the minors (sorry Stanford) to march us back to glory on the backs of hulking, mountainous offensive linemen and wholesome pocket passers with real-amuuurican names like Andrew Luck.

Everything hangs in the balance of this one decision.  Nobody can fix the problems on defense until the decision is made.  Recruits who want to play for Rodriguez don't want to commit until they hear he will be around for another year, and recruits that would be interested in Harbaugh look toward other schools in the meantime.

On top of this worry about the future, everyone has become an expert.  Some newpaper columnists tell us that this delayed decision means that Dave Brandon is definitely hiring Harbaugh, while others say this is the best case scenario for Rodriguez.  Internet posters everywhere log on to message boards to help crack the code of the things Dave Brandon isn't saying, only to get summarily nuked and shouted down for saying the same thing the last fifty coaching change speculation posts have said.

Is there one thing we can agree on?  This whole thing sucks.  It takes away our attention from the bowl game in two weeks that this team fought tooth and nail to earn, it takes away from our appreciation for the utter confusion our quarterback has created for sportswriters and coaches looking to classify him (Hint: he is still a quarterback.  Don't over think it.), and it distracts us from the recruits who choose Michigan because they want to be part of the family.

But hey, things are tough all over.  For the first time in a couple years we aren't the sorriest son-a-bitches on the block.  So next time you grind your teeth because Dave Brandon hasn't made a decision yet or Dee Hart isn't going to enroll early, remember that it could be worse:

We could be Florida, a team that just lost arguably its best coach ever due to health problems.  Urban Meyer may be one hate-able bro, but the man could coach football with the best of them.  In his six years at Florida, Meyer went an astounding 64-15 with three BCS bowl appearances, two national titles, and two SEC championships.  Those records include his 7-5 campaign in 2010 when it was somewhat evident that his heart wasn't in it anymore.

Today, Florida is forced to start all over.  Thankfully it is still Florida, so starting over means poaching one of the most coveted coordinators in the country to take over the top spot.  Will Muschamp has been saying no to other suitors for a few years now and was in line to replace Mack Brown as the head coach at Texas.  While Muschamp has no head coaching experience--which makes him somewhat of a gamble--the ceiling for this hire is very, very high (think Bob Stoops).  Now if they could only do something about that offense.

OK, maybe it wouldn't be worse to be Florida, but it might be worse to be the school that Muschamp was poached from, Texas.  Think back to one year ago today.  Texas was on top of the world, Colt McCoy was breaking hearts all over the Big Twelve en route to a Longhorn appearance in the BCS championship game, and Mack Brown was staring down his opportunity to walk away whilst on top--you know, like Jordan the first time.

Instead, the only thing that broke in the championship game was Colt McCoy's throwing shoulder, and with it Texas's hope at beating Alabama.  This season brought no respite as Greg Davis's offense struggled to do anything against anyone not named Nebraska, leading to the greatest work of Microsoft Paint the internet has ever seen: 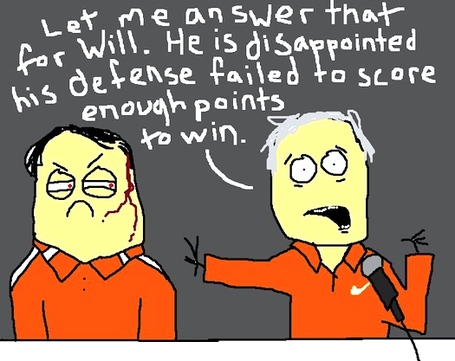 (From THujone's "Texas Season Review."  Seriously, this is epic.  I laugh every time I look at this picture.  The internet is a better for your contribution, THujone.)

So Mack Brown doesn't step down after the 2009 season because he doesn't want it to taint his legacy, and to add insult to Longhorn-fan injury, his refusal to step down after the debacle of 2010 costs the program its single biggest asset, head coach in waiting Will Muschamp, as well as possibly the next Texas offensive coordinator, Major Applewhite.

Things at Texas have escalated from minor repairs (replace Greg Davis, keep winning ten games until Muschamp takes over) to a full on engine fire (rebuild the coaching staff without the best recruiter and next in line for the throne).  Sure, Texas is Texas, and that rosters is still loaded, but I for one am glad I'm not a Texas fan right now.  Too much stress.

Of course it isn't just coaching shakeups that can hurt a program.  We could be Iowa, where God reigns down fire and vengeance upon tailbacks and drug charges on receivers.  If AIRHG (angry Iowa runningback hating God) was a running joke, it ceased being funny a while ago.  At some point you have to feel for a school that does it's damnedest to appease the angry Old Testament God (who we all know loves power running football with the occasional PA fake, just like they played back in biblical times), yet sees nothing but plagues and transfers befall the most sacred of positions, RB.  Iowa started this year with one of the best backfields in the Big Ten.  Camp wasn't even over before Brandon Wegher left the team for personal reasons.  Then, early in the season the oft injured Jewel Hampton was injured again--this time it was his other ACL that exploded as AIRHG laughed manically from the heavens.  This left Adam Robinson to carry the workload, which he did for a few games before breaking down and leaving the entire running load to true freshman Marcus Coker.

In the last week Wegher has transferred, Hampton has also transferred, and Robinson has been kicked off the team for unspecified, but allegedly academic reasons.  Have fun Marcus, you'll be the only one suiting up for the Insight Bowl.  All of this comes on top of senior wide receiver Derrell Johnson-Koulianos getting busted last week for "keeping a drug house".

If he can weather this storm, Kirk Ferentz is worth his rather large salary.

Of course what is worse than staring down the threat you can see is staring down one you don't understand, just as poor old Bill Stewart is doing today.  All Stewart knows is that some balding chick with a mullet is coming for him.

Let's not forget USC, who won't be going to a bowl game and is staring down the first of it's scholarship losses coming this off season.  Kiffin's boys will be lucky to keep their heads above water over the next two years.  Add to that the newly minted "Lane Kiffin Rule" that punishes coaches with suspensions for committing secondary recruiting violations.  Get as much pleasure out of USC's suffering as you can now, because odds are that team will be back and better than ever in a couple of years.

Some people just don't know how to keep a good thing going.  Take for instance Jim Delany, who is sitting on the richest conference in college football, and can't help but screw it up.

This just reeks of over thinking a decision.  When it came to conference names, what are the three obvious and most logical choices?

Schembechler/Hayes (sorry, but it makes sense.)

It is an easy choice from here.  Either you go with one of the geographic options that don't entirely fit because of the divisions, or you go with the memorial to the two coaching icons of the conference that might upset some of the other schools.

However, Jim Delany doesn't do anything easy.  Instead of going one of the obvious routes, he talks himself out of them all.  Can't use Woody and Bo because it would be exclusionary.  Can't use East and West because the split isn't down an east/west axis.  Can't use Lakes and Plains because the two great-lake schools got shipped out with Nebraska, Iowa, and Minnesota.  Besides, none of these are pretentious enough.  They don't scream "we are the Big Ten, and we think we are better than you."   So obviously this launches a six month study by a marketing firm that is either too stupid to realize, "hey Jim, you're over thinking this," or too greedy to care.  What comes out of all of this?

Now, I don't really care that Michigan isn't in the Leaders division (oh noes, fight song fail), or that they both start with Le-, or that Jim Delany obviously doesn't care that he just undercut every divisional discussion about Big Ten football with an undercurrent of chuckling and jokes from every other conference.  What I care about is that this is all some big ploy to make the Big Ten look better than everyone else.  "We train leaders, our former players are legends, isn't our conference just swell?"

No, it isn't.  These names are for divisions of a football conference.  Don't kid yourself.  You aren't changing the world, just setting the stage for a conference championship game.

Finally, it could always be worse to be Michigan State.  "Things aren't that bad for MSU right now," you say, "they are going to the Capital One Bowl and coming off a shared Big Ten championship.  Also, it is basketball season so they are staring down another deep tournament run."

While those are all good points, I still wouldn't ever want to be a Spartan, I don't care how much they win*.

I'm sure they feel the same way about us.

*(Also, I have to give our few Spartan readers something to get worked up about, lest they get fat and complacent on their recent successes.)