The Inaugural Brewskis: A Regular Season Year In Review

Share All sharing options for: The Inaugural Brewskis: A Regular Season Year In Review

Introducing the Brewski Awards! Given after every Michigan football game and major Michigan sporting events or just when we feel like it, these awards exemplify whatever it is Maize n Brew stands for – for those of you unsure, it’s beer and Michigan sports.

The inaugural Brewskis will be a Michigan regular season football review. Enjoy. Post name suggestions for future awards in the comments – and if you’d like to join the MnB Bowls You Care About Pick ‘Em, you have the chance to have an award named after your ugly cybermug for an entire year!
Without further ado, Michigan Faithful –

No surprise here. Sure, you can point to an improved offensive line and the emergence of Roy Roundtree, but the offense runs through Denard Robinson. In the least-contestable thing I've ever written, Denard is obviously this team's MVP. Any discussion of the offense starts and ends with #16. The plays he's made with both his legs and his arm this year speak for themselves. Sure, he's had his share of first-year starter mistakes, and he's been dinged up (how many times have we held our collective breaths this year after he's gone down?) but Denard Robinson is your 2010 Michigan MVP. The team agreed, the press agreed, and he's also all-Big Ten. He seemed more explosive in the early season, but still managed to change the dynamic of the game with his feet. Arguments can be made about whether he regressed as a passer or whether it was an injury, but the second half of the Wisconsin game was one of his finer efforts of the season. And then there's always plays like this:

Right then, I knew this season would be fun to watch, even with the worst defense I've ever seen. Denard, this Brewski (and the first one ever awarded) is for you.

Awarded to everyone’s favorite former walk-on, Jordan Kovacs. We’ve talked for two years about his physical limitations, but man, the kid plays his heart out out there, and it shows. He’s gone from the anonymous walk-on to the surest tackler on a porous Michigan defense. Sure, he’s not going to run down any Indiana running backs anytime’s oon, but who else would you take for an open-field tackle?

Terrelle Pryor. Every time this guy opens his mouth, it's a guaranteed sound byte. Like the Packers/Jets/Vikings/retired QB, Pryor seems to have little to no regard for the concept of a team. And this isn't sour grapes, either. Let's take a look, via Chicago Now:

Remember that QB who didn't want to play for Michigan because he didn't want to run a spread offense? I maintain that Twitter is the single greatest way for athletes to make idiots of themselves. After not being named all-Big Ten, Pryor has this to say:

Damn. I must be the worst Qb/player. I might quit football.

I've ranted about Pryor enough, but if you want more, just hit the Google. The man is a goldmine.

One of my favorite parts of every Michigan game is the halftime show. From the drumline to the stadium band coming up in the third quarter and playing The Victors to different sections, the band gets the crowd fired up and will ALWAYS trump piped-in music. Scott Boerma and the Michigan Marching Band always put on a phenomenal show, and, wow, do those men and women work hard. In this blogger's biased opinion, 2010 has been the best MMB year in a long time - with shows like Lady Gaga and old classics, they always entertain. The football team should be on notice, because these guys deserve a trip to Pasadena. Well done, Michigan Marching Band. Let's hope your recruiting class next year can replicate this:

Given to a player or coach who makes a great decision on the field, this award goes to Michigan head coach Rich Rodriguez for the way he handled the Denard Robinson injury situation. Say what you want about some of his playcalling (and I will, directly below) but the sporadic Tate Forcier series this season were exactly what Michigan (and Denard) needed. I don't trust Tate for more than a few snaps or a series per game, but it's good to have him spell Denard at times. Also nice to see Devin Gardner angling for a redshirt. Hopefully the NCAA will grant that.

Because this blog is fair and balanced, (ed note: hahaha) this award also goes to Rich Rodriguez. How many third-and-shorts did we see this year with Vinny Smith running directly into the pile and not getting the conversion? We get that Mike Shaw cannot catch. But for the love of Woodson, where was Stephen Hopkins, our big back, on third and short? I got heart failure every time I saw Denard under center this season. Let's hope those plays never see the light of day again. Don't even get me started on Jeremy Gallon returning kicks. We spent a scholarship on Drew Dileo! Fortunately, this wrong should be righted.

Come on, Michigan Athletic Department. I know people have railed against piped-in music on this blog before, but you're disrespecting the band. At least they're starting to amplify the band - a step in the right direction. Plus, I wanted to include this fabulous photograph, taken by none other than yours truly last year: 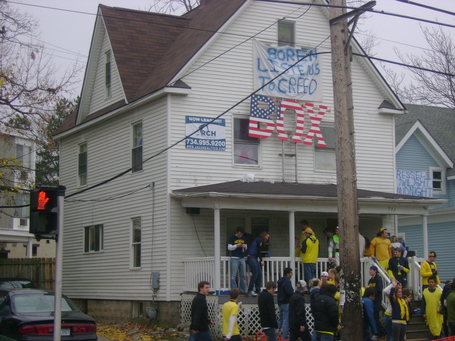 Love the OSU week. A Brewski honorable mention to the BOX frat.

Michigan’s kicking game. From the kickoffs out of bounds to a mere four FG’s made, to searching for kickers in the parking lot, Michigan’s special teams was a total disaster. Then came the Hagerup suspension and the TD given up on a kick return that completely changed the dynamic of the OSU game. Not to mention the fact that Jeremy Gallon cannot HOLD ON TO THE DAMN BALL.

It’s impossible to be snarky about this one. Say what you want about whether Rich Rodriguez buys in to the Michigan "family" idea, but the Brock Mealer story is better than anything football-related this season. Bar none. What that young man was able to achieve was nothing short of miraculous. In a season marred by horrific injuries to players like Rutgers’ Eric LeGrand and scandals around the country, it was great to see something this inspirational.

The Beating a Dead Horse Award -

The Detroit Free Press. After an offseason rife with stories of practice violations, the Freep gave rise to the Angry Michigan-Hating Gods. There’s a reason this site never cites the Free Press. This is that reason. Earlier this year, we had a post or two asking commenters to move on, and I wholeheartedly agree with that statement. In a post about Tattoogate, I made a Freepy remark, and the response by jeepnut in the comments sums it up:
"I wouldn’t wish that on my worst enemy"

Setting a new record for total points in a game, Michigan beat Illinois 67-65 in triple overtime. For the last three years, this is the kind of game Michigan would have lost. Something about this game felt different, though. It had everything – from two wide-open TDs to the Illinois RB to some Tate heroics. But the play of the game was when the Michigan defense woke up from its three-year-long slumber and decided that 65 points was enough. Jonas Mouton led the charge against the Illinois QB and forced a failed two-point conversion. The defense has only had a few moments like that all year, but man, that was a good one.

A long time ago, Michigan was 5-0, and this blogger wrote in a post that Michigan was one win away from bowl eligibility. Unfortunately, that next win didn’t come for a month, surrounded by three tough losses (one to a walk-on QB) and a bye week. But then Michigan pulled out that narrow win against the Illinois, and Michigan was finally able to reap the rewards of 15 extra bowl practices for a very young squad.

The Eagerly Awaited Commenter of the Year –

For providing consistently excellent comments and contributing to the quality of the insanity that is Maize n Brew, this highly coveted award goes to our own Kyle McCann't for this gem in a rather dusty old Friday Drinking Instructions:

Pretty much sums up how we operate here at Maize n Brew.

Named for the better half of this blog, the inspiration for these awards was by far the best beer I have consumed this year. While we traditionally spotlight local beers from the Midwest region, it would be a travesty not to include the Original Muenches Bier Paulaner. Recommended by none other than this blog’s own Maize n Brew Dave, this fine German beer has hints of oak and is just the right amount of hoppy. A perfect German Helles Lager, this one is just too good to pass up. Cheers, Michigan Faithful.