Too Early; Too Late

Share All sharing options for: Too Early; Too Late

Most of you don't know that I, along with SCM, came over from a blog that I started called "The Only Game That Matters" which was a thinly veiled attempt at a Big Ten-centric blog that came from a Michigan point of view.  It was, for all intents and purposes, a Michigan blog that sometimes wrote about other teams too.  This was back in 2008 when Rodriguez was first coming over and we won three games.  You can imagine the shift in the world-view of a Michigan fan since that time.  We've gone from expecting 7 wins at a minimum (and even that was painful, 2005) to trying to justify exactly why we're just not very good, how we expect to improve, and how winning against Illinois and Purdue this year was a success while conveniently ignoring the fact that we're not very competitive against top-tier competition.  This isn't a critique leveled at coaching; it's just the reality of the situation.  Being a Michigan fan recently has not been a whole lot of fun.

About the best thing going for that old blog was the banner at the top, which was designed by some guy on a message board who has infinitely more photoshop skillz than I do.  Check it out:

That's pretty sweet if you ask me.  I got an email the other day from somebody claiming that he could pay me $100 if I put a link to his site on that old blog.  I'm inclined to take him up on it just to see what happens...it's been dead for over two years now.  However, the old masthead got me thinking how radically different the Big Ten is going to look after this year with the addition of Nebraska.  I mean, where on earth would there be room for another bubble with a big red "N" in that banner?  It would have to be completely redesigned, and I'm not even sure that guy who did the first one is posting anymore on that message board...I digress.

The last time the Big Ten expanded was 1990, with Penn State joining the conference, and even then they didn't play in the Big Ten athletically until 1993.  That means that for the majority of my life, at least the majority of my college football obsessed life, the Big Ten has remained fundamentally unchanged.  11 teams play in a weird round robin that eventually leads to a conference champion being crowned usually by virtue of a tie-breaker of some sort.  Next year, that goes out the window.  While the changes that have been thrust upon us are, in my opinion and I think the opinion of all save the most "get off my lawn" types, a good thing, it's hard not to shed a tear - even briefly - for the conference that was.  We're not going to be playing Penn State or Wisconsin with regularity anymore.  This hit me last night as I talked with SCM about past seasons.  This makes me sad.

The Big Ten Conference has always been viewed through the lens of the Midwest itself, and as a proud son of the Midwest, it always made perfect sense to me.  Just as the rest of the country largely views the Midwest as flyover country who's hey-day left to China and Mexico along with the rest of heavy manufacturing, the Big Ten remained the stodgy conference who still thought that 3 yards and a cloud of dust was football the way God intended, and no we don't need that glitzy conference championship game, thank you very much.  The old way, complete with quirky schedules and (at least it seemed) ties at the top of the conference year in and year out was just fine.  In fact, if you polled the majority of midwesterners, I think you'd find that most would prefer to go to the Rose Bowl to play a PAC-10 team over this fancy-pants BCS that everyone keeps talking about.  It's not necessarily a bad thing, it's just a longing back to the days when Detroit was king, and President Roosevelt rode down the streets of Flint, MI in a ticker-tape parade.

Yes, this happened.  While the rest of the country evolves, the Midwest continues to struggle to keep up.  Sure, point to Indianapolis and Columbus and Chicago as thriving cities, but take one drive from Anderson to Muncie, IN and you get my point.  The Big Ten Conference mirrored that, only adding a basketball tournament after nearly every other conference implemented one, and keeping their football simple.  It's not that the teams themselves mirror the state of the Midwest; Ohio State has been as competitive as anyone over the past 20 years, and Michigan has had some pretty good teams if you ignore the past 3 years.  The conference, however, had to change in order to maintain a competitive balance.  So they did.  They added Nebraska, and now we've got divisions and a TV channel all to ourselves, and we're set to have a shiny new conference championship game in Indianapolis.  And that's all great; I'm glad that they've decided to join the rest of college football in a year of sweeping changes across the landscape.

However, just a little bit of my Midwest loving self is going to die when the Big Ten changes next year.  If the hiring of Rodriguez and the shift to the spread put the nail in the coffin of the Bo and Woody years, then this change is what drives it home.  It has to, for the good of the conference, its fans, and the revenue it generates in the modern world; without it, the Big Ten would be hopelessly outdated.  But, for the first time outside of the implementation of the BCS, I can say that I remember the good old days, and things might have been better, certainly simpler, during those times.  As the Big Ten moves into the modern era, let's hope that it doesn't forget that cold November Saturdays against a steel gray sky got it where it is.  Not fancy championship games, night games, rawk music, or anything else.  Just good football played, watched, and enjoyed by great people. 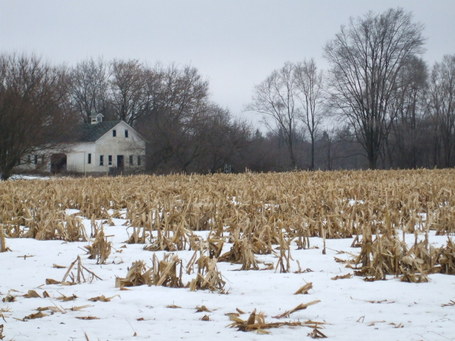