(Ed Note - My computer is going haywire right now, so if something is screwy with the text, please let me know.)

There’s not a lot going on at these days (that's good anyway) so we thought we’d turn our attention from the harsh reality of the present to the ever glowing golden future of next year. Next year. It sounds so sweet, doesn’t it. Next year is the year we win the National Championship, cure cancer, and visit Mars for the first time. It’s all possible! Woo!

So who better to talk about that future than someone who knows college football better than we do? We got in touch with our old buddy Adam Rittenberg at ESPN to talk a little Big Ten recruiting and how well made out in this recruiting class. We also touched on some of the Demar Dorsey flap, but mostly we talked recruiting. So once you’re done here, head over to ESPN and check out Adam’s Big Ten Blog for the latest insider updates on the Big Ten.

Maize n Brew Dave: Adam thanks for joining us. Everyone who’s followed ’s recruiting this year knows about this class’ crown jewels, Demar Doresy (S), Devin Gardner (QB) and Cullen Christian (CB). But I’d like to look past the big names and go into the meat of the 2010 class. I've got a pair of two part questions, feel free to combine your answers if they are the same person in your answers.

Outside of Dorsey and Christian, who is the most likely defensive recruit to immediately contribute to the team, and who has the most long term potential?

Adam Rittenberg: Frankly, anyone in the backfield will help. Dorsey could start tomorrow. But since we’re excluding Dorsey and Christian, Marvin Robinson is the most likely candidate to contribute immediately. I think Jake Ryan is an interesting prospect. He was a late bloomer in , and lost a lot of hype due to the time he missed his junior year recovering from injury. I don't buy into the junior year recruiting hype at all. Personally, I love the guys that have the big senior seasons like Ryan did. (Ryan, at left, with Captain Ramius)

AR: Kinda hard to pick any one prospect. With all the wide receivers managed to get on campus early, there’s going to be a big competition for playing time at receiver. There’s a lot of speed and skill in the class and I think they can contribute immediately. As a long term contributor, I think (Center) Christian Pace could be a big contributor down the line. He's a perfect offensive line fit for Rodriguez' system.

MnB Dave: If there was a weakness in this recruiting class, what is it?

AR: Offensive line. But they recruited well in the previous few years and are stocked with red shirt offensive linemen, so it’s not as stark as it might have been in previous years.

MnB Dave: Let's talk about the stars of the class. When do you see Gardner as a starter? Likewise, when do you see Dorsey and Christian on the field for ?

AR: Regarding , I think he’ll play as soon as he’s needed on the field. Coaches will do what it takes to save their jobs, if he feels that can compete for the starting QB slot, then he’s going to play. I think you have to have him in the mix. Tate Forcier's an injury waiting to happen with the way he plays and his size. I think you have to consider putting in.

MnB Dave: Should get its hopes up for 2010 because of this recruiting class?

AR: People should be excited about this class. But people also need to understand that this recruiting class needs to be a difference making class. will score points this season, but if the defense doesn't get a lot better it's not going to matter. The defense will have to make plays, and as a result these incoming defensive recruits will have to contribute right now. 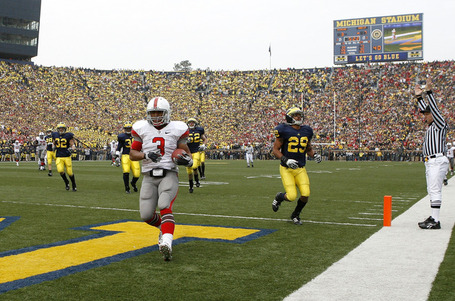 MnB Dave: You know that we at Maize n Brew weren't too happy about the hub bub over Demar Dorsey's commitment and have tried not to engage on the specific subject. But on a micro level, have you ever seen something like this before regarding a Big Ten recruit?

AR: Well, I haven't covered the league long enough to remember a specific name in the Big Ten, but the name that jumps to mind nationally in terms of a relatively recent recruitment flap is Willie Williams. Dorsey is an issue because of the other prior issues that popped up: the transfers at the start of Rodriguez’ tenure, the NCAA investigation, and finally Justin Feagin. If these prior events don’t happen, maybe Dorsey’s signing isn’t that big of a deal. But they did, and there’s a higher level of scrutiny that accompanies those events.

On the issue of risk and second chances, this is something every school has to deal with and it’s probably a chance that and schools like it should take. It’s not like was the only school pursuing Dorsey. If hadn’t taken a chance on Dorsey plenty of other schools would have.

MnB Dave: Is this something we're going to see more of in the future with facebook/twitter/et al, or is this something that will go away if there's enough of an uproar about it?

AR: The way recruiting coverage has blown up over the last seven years, if you're a top recruit with a past, it's going to come up. It’s just going to happen. The guys with a past who are under the radar, those two and three star types, they won't have this problem until there's a screw up on their part. But the top 25 guys will have to deal with this going forward. Unfortunately, it’s the nature of the beast.

MnB Dave: All right. Let’s move to something a little more positive. In terms of the Big Ten as a whole, what school did the best this recruiting season. All the services seem to say is the out and out winner, but after that the rankings are more scattered than Herschel Walker’s personalities. On a "needs" and on a "stars" basis, who did the best this recruiting season?

AR: was definitely the best class in the Big Ten this year. In terms of the best "needs" based recruiting, I think was tops in the conference as well. was a definite second in terms of overall class quality. Looking at the class I think they addressed their positional needs better than any other team in the Big Ten, save .

Our thanks to Adam Rittenberg for taking the time to chat with us. Make sure you check out the Big Ten Blog on ESPN.com.