7 Reasons why Texas joining the Big Ten is a Win Win for College Football, Texas, the Big Ten and the Big XII

Share All sharing options for: 7 Reasons why Texas joining the Big Ten is a Win Win for College Football, Texas, the Big Ten and the Big XII

You read that right. Texas joining the Big Ten is good for everyone. Really. And by "everyone" I mean the Big Ten, my conference. Er... wait. This is supposed to be persuasive. I mean the royal "everyone." Yeah. That's it.

Texas to the Big Ten is a pipe dream. It won't happen. Even so, it must happen. It's too good not to happen. I've thought this through. Really. I have. And Texas in the Big Ten makes more sense than you'd think. To prove it, I put together 7 reasons why Texas joining the Big Ten is good for everyone.

Let me put this out there: I don't pretend to believe that any of this holds water. Texas joining the Big Ten is good for two parties: Texas and Big Ten. The Big XII gets hosed bad if this happens. And not in a "my girlfriend left and she took the dog" kind of way. In a "I just watched my family get mauled by a bear" kind of way. 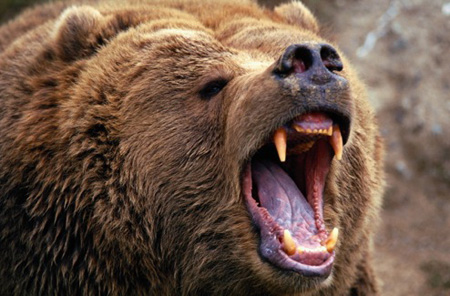 You can't strip a conference of a national championship caliber program (in women's and men's sports) and not expect some bad things to happen. It's not like Texas is the Big XII. Far from it. Oklahoma, Kansas, Nebraska, Oklahoma State, Texas Tech, etc. The Big XII would survive. Easily. But there'd be a little less money in the conference and less pre-season OMGMNC!!1!!! talk. It's a noticeable hit.

So there's that. But let's face it, I want Texas in the Big Ten. For it to work though, there needs to be some way to rationalize it. Lies. Damn lies. And statistics kind of rationalizations. So let's get to it.

1. Money - Dear God is there a boatload of money at stake. And we're not talking a briefcase of hundreds. We're talking a Scrooge McDuck style money bin. Enough for every member of the Big Ten to feed its athletes nothing but kobe veal feed giant lobsters for breakfast lunch and dinner on disposable plates made out of dinosaur bones, all while leaving enough left over for each school start its own space program. I understand Iowa has already earmarked their portion of the plunder for research into cloning Hayden Fry. Penn State already spent theirs fixing Joe Pa's eyesight (you can probably believe how many eye surgeons Joe consumed, but you'd never believe how much money it takes to pay off their next of kin).

And it's not just the Big Ten that makes out like a bandit here. The Big XII will collect plenty out of this too. All of a sudden every time Texas plays Oklahoma or A&M it's not just a local conference showdown, it's an interconference grudge match. All of a sudden the advertising revenues skyrocket. Sure the conference is used to keeping all that money, but the influx of Big Ten centric advertising will make the A&M game a real money maker again. It'll jack up the rates for the Red River Rivalry. It'll also create a huge boost in Big XII centric purchasing from member schools because of the....

2. Bad Blood - Nothing makes for better television than estranged lovers fighting. Look at how much money Jerry Springer made off of it. If Texas left the Big XII for the Big 11 Ten, oh baby, RAGE! As if the Red River Rivalry needed to be more intense. If this happens, ESPN, ABC, CBS, FOX, etc... will play this angle through the roof. It will take on a life of its own, driving up fan interest and fan investment in the new Big Ten Big XII rivalry that literally will have appeared over night. All of a sudden there will be a raging battle for the football soul of Middle America. The war of northern aggression will be reignited in the Big XII. Anger. Rage. Hate. All the things we need to make sports awesome.

3. It Gets Austin out of Texas - Let's face it. The hippies in Austin have always been the odd balls of the Big XII. Austin is this tiny island of liberalism in the vast sea of conservatism that is the Big XII. And I'm not talkin' politics people. Austin is... well... different than the rest of Texas and the Big XII. Wait. Maybe not Colorado. Definitely not Colorado. With the amount of ganja eeking out from under the dorm room doors in Boulder, Colorado belongs in Caribbean more than the Big XII. But I digress. Austin has a Big Ten town kind of feel. Minus the three feet of snow.

They also have the pre-requisite ratio of supernerds in their student populous to blend into the Big Ten immediately. Further, once free of the Big XII's requirement of caging each schools nerd population UT's nerds could save the world. Imagine once they release their nerds from their wire mesh cages and allow them to free range, the sky's the limit on what they can accomplish. If keeping them under lock and key nets you the Godzillatron, Austin in the Big Ten will cure cancer in three years.

Now you see the benefit. Everyone wins. Texas is no longer a refuge for dirty hippies in the Big XII and we cure cancer in the same swipe. So if you don't want Texas in the Big Ten, well, you're for cancer.

4. TCU Joins a Real Conference - I don't see how anyone can argue that this is a good thing. The only thing we argue about is who has to take the bullet on this one. It's like the group of dudes who knows that every one of them will score if one of them takes the fat ugly girl home. But no one's quite willing to do it yet. The solution? Either get one of your buddies really, really drunk or take advantage of his vulnerability over a recent break up. Since we can't get an entire conference drunk at once (actually, yes we can, we have those kinds of powers: behold the SEC. Booyah, you're wasted), we'll happily take advantage of a recent breakup to convince the Big XII to jump on the grenade.

So let's talk up "her" good traits. Dude, this is a win for everyone. TCU's from old money, it was South West Conference member, so it was in a "national championship worthy" conference before. Athletically they can play with the big boys. Come on dude, you let Baylor is in the Big XII for pete's sake, so don't tell me you've got "standards". Their football program is top notch. They've got a decent (at least not horrible) basketball team. They're a damn good baseball program, too. Plus, their cheerleaders are haaaaaawt. TCU's already in Texas, even. So it's like nothing changed. They're the same really. Another drink? Here you go buddy.

That's it. Go over and talk to her.

5. The Conferences start to make sense - This actually benefits everyone. Really. As good as a conference as the Big XII has been, it's been top heavy. The Big XII South has repressed  the Big XII North with a brutal prejudice over the last decade. It's been ugly. Kansas and Nebraska have been okay, and Colorado has sobered up long enough make the occasional Big XII championship game, but the South has been dominant. And it's getting stronger. Texas Tech and Oklahoma State have risen to prominence, Texas and Oklahoma continue to dominate, even Baylor's becoming respectable, and A&M will eventually get its act together. Frankly, Texas' absence from the Big XII south might be a godsend for the teams not named Oklahoma (though OU does get an obvious benefit). Throw TCU into the South and all of a sudden you've got a more balanced, more competitive Big XII.

For the Big 11 Ten, all of a sudden you not only have a balanced schedule and divisions, you get the conference championship game everyone's been begging for since the SEC decided to ruin the concept of the regular season so many years ago. You could finally divide up the Big Ten into East and West and actually have balanced conference divisions. In the West: Iowa, Minnesota, Wisconsin, Texas, Illinois, Northwestern. In the East: Michigan, Ohio State, Michigan State, Indiana, Penn State, Purdue. At first blush, that's a pretty good split. Three heavy hitters in each division, a bottom feeder a piece, and two aspiring programs. Works out pretty well in basketball too.

So with Texas in the Big Ten, all of a sudden you've got a more competitive and balanced Big XII. You've also got a functional, properly expanded Big Ten with a championship game. If you take one argument away from my twisted logic, take this one.

6. There are no extra travel costs involved for either Conference - One thing I keep hearing is how much more expensive it will be for Texas to play it's road games, and that's a reason not to do the deal. Uh. No. Have to ever tried to get to Lubbock from...well... anywhere? It's not only impossible but expensive as hell. If Texas joins the Big Ten their travel costs don't change. There's a major airport in Austin and most of the Big Ten schools are located on top of or within spitting distance of a major airport. Plus, have you seen how big Texas is physically? It's as far to El Paso from Dallas as it is from Dallas to Chicago. There's a little more distance involved, but not enough to make it cost prohibitive or even to make it matter. Further, if like I suggest TCU is picked to replace UT, well, nothing changes in-conference for the Big XII.

7. It Creates a Basketball Super Conference - That's right Big East, suck it. Michigan State, Wisconsin, Ohio State, Purdue, Indiana (think of the history), Michigan (ditto, bitches), Illinois, Minnesota, Iowa (eventually, right? Please? Dammit....), and now Texas. You're looking at a twelve team conference that year in year out will send seven to eight teams to the NCAA tournament. Hell, there's an outside chance at ten teams in a season. In a word, awesome.

So there you go. Seven well thought out reasons Texas should join the Big Ten. I'm open for more great reasons. There are a few more minor ones. Another great point would be the advantage of a swimming super conference. Michigan and Texas in the same league. As a former swimmer, this would be awesome beyond compare. Then there's baseball, Texas adds instant credibility to the Big Ten and allows the rest of Big Ten the ability to play against top flight talent on a regular basis.

So give me some good reasons that it shouldn't work. No, wait. Actually don't. I don't want to hear it.