Maize n Brew gives you your daily (or semi-daily) rundown of all the Michigan Football, Michigan Basketball, College Football, and College Basketball news you need to get through the tedium of your boring desk job. For good measure we'll throw in a little irreverent information, comedy and commentary to help you salt away the time until the clock strikes 5pm.  Want it in 140 characters or less, follow us on Twitter! Or you can find us on Facebook!

I wish I could say today's news started better:

Vanderbilt Commodores recruit Rajaan Bennett shot to death in apparent murder-suicide - This is hands down the worst thing I've heard this offseason and for the last several offseasons. Rajaan Bennett, one of Vanderbilt's top-rated signees for the 2010 class, was killed Thursday in an apparent murder-suicide involving one of his mother's ex-boyfriends. Bennett was shot to death before the shooter took his own life. All of our thoughts and prayers are with this young man's family and with the Vanderbilt football team. Bennett was a young man with a bright future, an All-State selection as a running back and a 3.8/4.0 student who chose Vanderbilt because of its academics. Like so many, we're stuggling to make sense of this horrible news.  Again, all our thoughts and prayers go out to Rajaan Bennett and his family. TSK has more on the tragedy. Rest in peace, young man.

An emotional Bobby Johnson reacts to the news of Bennett's murder - video courtesy of Dr. Saturday.

If you are interested in contributing to the memorial fund, send checks made out to the McEachern Endowment Fund with "Rajaan Bennett Memorial." Full details at Dawg Sports. 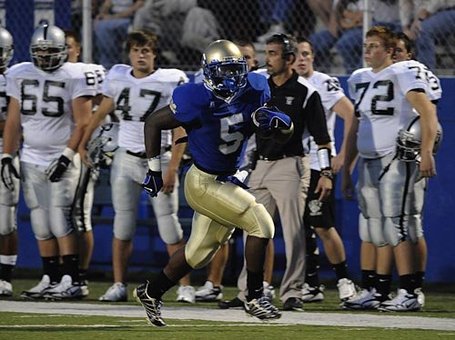 God speed, young man. May you find the peace you deserve. Photo via Johnny Crawford, ajc.com

Updates on Michigan Football, Basketball and the rest of the College Sports world after the jump.

Other Stuff You Should Read Right Now

Naked Lake Merritt swimmer played college basketball at Michigan - Apparently the man who swam naked across Oakland's Lake Merritt on Wednesday afternoon after robbing two Oakland, CA women was former University of Michigan basketball player Dommanic Ingerson. Ingerson was a former Brian Elerbe/Tommy Amaker Recruit who was basically useless once he arrived on campus. Short temper, not a lot of focus, subpar effort. Take away the temper part and he was your basic Elerbe/Amaker recruit. Sadly, the kid was a highly prized recruit in 2001-2002. Sheesh. As if their resume wasn't crappy enough. (HT: Hail to the Orange for emailing me the link)

Template for Shooting Down Any Argument Against the Texas Longhorns Going to the Big Ten - The blog Frank the Tank's Slant just put together one of the best and most compelling arguments for Texas joining the Big Ten. This is seriously a must read.

A re-post on potential 2011 LB Receruit Lawrence Thomas - Genuinely Sarcastic goes to town on the State of Michigan's screwy recruiting and the games people play with high school recruits. As always, a must read.

BLACK HEART GOLD PODCAST 23 - Hawkey State and OPS from BHGP discuss Big Ten expansion with some of their favorite protagonists: Sean Keeley of SB Nation and Troy Nunes is an Absolute Magician, Run up the Score of Black Shoe Diaries, Bill C of Rock M Nation, and Peter Bean of Burnt Orange Nation. Yet again, my expertise was excluded out of jealousy.

Michigan basketball one of Dick Vitale's 'major disappointments' - Angelique Chengelis suffered through a conversation with Dick Vitale for some unknown reason. As usual, Vitale's love of hyperbole knows no bounsd. "Vitale believes the Wolverines are among the biggest disappointments in basketball along with Connecticut, North Carolina and UCLA." Um. What? Lets take another look at those last three teams Dick. Every one of them has more talent, depth, and skill than Michigan. Every one of those teams has been able to recruit top 10 talent every year for the last ten years. One tournament appearnace does not a program rebuild.

Penn State at Michigan Preview from UM Hoops - The Lions aren't winless anymore after crushing Northwestern's Tournament hopes. I know there's some excitement brewing on the outskirts of the fanbase, a frame of mind thinking thatMichigan can make a BT tournament run and make the Dance, but let's not get ahead of ourselves. Michigan hasn't won three in a row all year (something it's trying to do tonight). Further, just like the hockey team, they've got some glaring holes that can only be overcome against good competition every so often. I just don't see it happening. But hey, stranger things have happened.

A Basketball Recruiting Wrap-Up with UM Hoops and The Wolverine Blog. Part One is here. Part Two is Here.

Rittenberg ranks Donovan Warren the No. 23 player in the 2009 Big Ten - Gotta be honest, this may be a little low. No one threw at Warren unless Robinson had him 10 yards off the line. And even then it was a bad option for opposing defenses. Warren should do pretty well at the next level, but man I wish he'd stuck around one more season.

The Pairwise Rankings: With a Spartan Slant - The Only Colors has a breakdown of the Pairwise standings. It says what you think. They're in the tournament and we're boned barring a CCHA tournament win.

Looks like Ohio State at the top of the Big Ten Baseball Standings - Rivals writer Kendall Rogers provides a brief breakdown of the upcoming Big Ten Baseball slate. Right now, due to some uncertainty on the mound, the Wolverines project third in the conference behind OSU and Minnesota respetively. But the good news is Rogers projects the Wolverines competing for an at large CWS regional bid.

Only Iowa City Police and Taxis Capable of Slowing Adrian Clayborn - ESPN is reporting Clayborn will enter a guilty plea in his assault case at a dispositional hearing next month. Lesson? Don't punch cabbies. Seriously. Haven't you learned anything from Patrick Kane?

Arkansas Rocket Launcher Ryan Mallett breaks foot, will miss spring pracitce - The Razorbacks spring game just got a lot less interesting, because Ryan Mallett ain't going to be playing. Mallett broke his foot during off season workouts, and will take the next three to four months to heal up, eat pizzas and generally get to know himself. Following his return Mallett will resume his roll as NASA's chief orbital launch apperatus, human blowtorch (just ask LSU's corners), and poet lauraet of France.

Iowa Running Back to Transfer. Hawkeyes Yawn, Pull Another One Out of the Corn Field - Iowa running back Jeff Brinson has decided to transfer from Iowa to an unknown school close to his home in Florida. With the return of Jewel Hampton, Adam Robinson, and Brandon Wegher, the effect of this is similar to dropping a pebble into the sun.

Iowa State Gets The Call From The Big 10 - ISU athletic director Jamie Pollard is thrilled when he's contacted by Big Ten commissioner Jim Delany about expansion. Oh, and this is all totally fake.

Pac-10 expansion could come by summer, or it may not come at all - Dr. Saturday says it's starting to look a little bleak on the PAC-10 expansion side, so long as it involves Colorado. Either they're going to poach CU and someone out of the WAC/MWC before the start of the season or it ain't gonna happen.

Five toughest BT non-con games in 2010 - Rittenberg ranks the toughest OOC games for the Big Ten. No. UMass is not on the list.

Do Tom Izzo teams get better as the season goes on? - The Only Colors breaks down the Spartans' hardwood performance as the year wears on.

Here's a Lion I Can Root for: Olympic Speed Skater Allison Baver - Black Shoe Diaries gives you the low down on a rather attractive U.S. Speed Skater named Allison Baver. Damn. She does look good in spandex. (SFW)