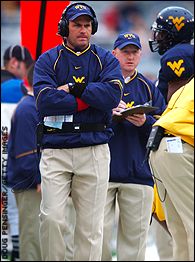 While the University of Michigan football team was busy winning an outright Big Ten conference championship back in 2003, Rich Rodriguez was struggling to keep the wheels from coming off of his 3rd football team at West Virginia.

Are there some lessons here for Michigan in 2010? Let's find out.

Here's a quick progression up to Rodriguez's 3rd team in Morgantown (2003 season):

Rodriguez lands his first big time head coaching job at his alma mater following the footsteps of one of the most highly regarded head coaches in the West Virginia football history (Don Nehlen).  Nobody really knows who the hell this Rodriguez character is, only that he's implementing some whacked-out, unconventional, no-huddle offense and a rare 3-3-5 defensive set that nobody either from the NFL or the local community college had ever heard of before. During the first football season, Rodriguez's team staggered around like a decapitated zombie for three months before finishing 1-6 in conference and 3-8 overall. Of course, there was no bowl game to go to and the entire state was pissed off to no end.

During his second year, the formerly pass-happy Rodriguez is so fed up with interceptions, several major adjustments are implemented on offense - namely a lot less passing. Thankfully, there are a high number of veteran returnees on defense all counting in Rodriguez's favor. The offensive changes are magically successful and the Mountaineers blast off to a 6-1 finish in the Big East conference and 9-4 result overall, not to mention finishing with the No. 2 ranked rushing offense in the entire nation at almost 300 yards rushing per game.  While all four of West Virginia's losses are decisive ones (by 17 or more points), Rodriguez's team manages to knock off two ranked teams on the road (Pittsburgh and Virginia Tech).

With three of his own recruiting classes already checked in, Rodriguez has laid the foundation for a program with his own profile of players on both sides of the ball.  Fans were finally coming around to all of this spread-the-field, hurry up, no-huddle business on offense.  Pre-season expectations for Rodriguez and the WVU football program were at stratospheric levels because he had just won 9 games the year before - something his hallowed predecessor achieved only 4 times over his entire 21 year career (1981, 1982, 1983, 1993). 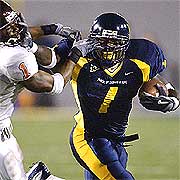 On the one side, West Virginia was fortunate to return with junior quarterback Rasheed Marshall to the lineup. Marshall was quick and elusive when running the ball, but often treacherous and eratic when throwing it. West Virginia's all-time leading rusher, Avon Cobourne, would have to be replaced by a committee of backs: senior Quincy Wilson, junior Kay-Jay Harris or sparkling freshman Jason Colson. The offensive line lost 3 starters from 2002 in OT Lance Nimmo, C Zack Dillow and OG Ken Sandor.  It would need to be reconstructed with guys like senior OG Geoff Lewis, senior C Ben Timmons and freshman guard Dan "Take Me To the Promised Land" Mozes.  Would West Virginia finished second in the land in rushing in 2003? Uh, no.  The Mountaineer receivers, Chris Henry and Miquelle Henderson, were fast and talented, but seldom received deliveries. Interestingly, Henry did lead the nation with 24.5 yards per catch among all receivers with 40 or more catches. 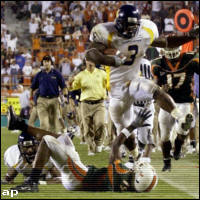 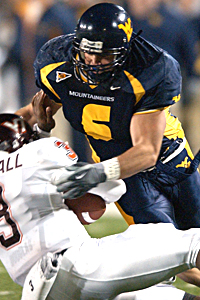 The problem with the 2003 Mountaineers was that they lost a lot of great players for the 2002 defense to graduation.  The defensive line was decimated: Defensive ends Tim Love and David Upchurch both gone.  Star defensive tackle Jason Davis gone.  Both linebackers, James "Dirty" Davis and Ben Collins graduated and gonzo. Strong safety Jermaine Thaxton and Box Safety Angel Estrada also had graduated.  The Mountaineers star punter Mark Fazzolari had also finished his stellar career in 2002.  With the offensive production somewhat uncertain, the defensive on-field performance would make or break this team in 2003.  Fortunately, defensive coordinator and linebackers coach Jeff Casteel had some nice depth going in.  The defensive line would be anchored by defensive ends Fred Blueford and Earnest Hunter and DT Ben Lynch.  The Mountaineers had four talented linebackers in Grant Wiley, Leaundre Washington, Adam Lehnort and Scott Gyorko. The secondary was made up of a talented cast including cornerbacks Adam "Pacman" Jones and Lance Frazier, free safety Brian King and Jahmile Addae at Casteel's "bandit position"(SS) in the 3-3-5.

So a 1-4 start. That must have been special. It's not to difficult to the outpouring of support among West Virginia football fans for Rich Rodriguez at that moment in time.

But just when it looked like things would really end unwell for Rodriguez and his staff, the Mountaineers sort of came alive in conference play rattling off 7 straight wins including a 21 point shellacking of No. 3-ranked Virginia Tech (8-5). This 28-7 win over the Hokies was the biggest upset by a West Virginia Mountaineer football team ever.

Before this game, West Virginia football's greatest upsets ever were against nothing higher than No. 4 ranked teams (specifically No. 4 Boston College and No. 4 Penn State respectively in 1984, and No. 4 Miami in 1993).  The 7 game win streak in 2003 included notable wins over Syracuse (6-6), 16th ranked rival Pitt (8-5), and Boston College (8-5). As low as West Virginia had been following that Miami loss on October 2, the unexpected turnaround also catapulted the Mountaineers to their first Big East title since 1993.

So what was responsible for the turn around?

Whenever the Mountaineers were running through the brambles with their flintlock guns, and raccoon tail hats, they were absolutely lethal (13th rushing nationally, 212 yards rushing per game). This was mainly due to the fancy footwork of a committee of pint-sized running backs Quincy Wilson, Kay-Jay Harris, Jason Colson as well as option quarterback extraordinaire Rasheed Marshall. Rodriguez had adjusted the offense back in 2002 to accentuate Marshall's running skills, de-emphasizing the weaknesses associated with his passing.  West Virginia did finish 105th in the nation with an anemic 156 passing yards per game. Overall, however, the productivity on offense was good enough to score points, gain leads and win games. West Virginia finished ranked 72nd in the nation (5.63 yards per play, 368 yards/game), scoring on average 29 points per game (40th in the nation).

While the offense was clearly not as explosive as the year prior, standout play on defense and terrific special teams helped turn West Virginia around the latter half of the season.  The defensive front of Blueford, Hunter and Lynch did a great job of holding the line and keeping things contained while backers Addae, Wiley and Washington performed clean up. West Virginia appeared to be atrocious in pass defense in 2003 (ranked 105th, 259 yards per game), but decent in passing efficiency defense (45th nationally).  When it came to opposing the run, it was simple. The Mountaineers would suffocat their opponents (34th, 131 yards per game) and help maintain scoring leads. The Mountaineers surrendered just 23 points per game.

Rodriguez after winning share of the 2003 Big East title by beating Temple:

"When I first got this job I had no idea what it took to be Big East champs, but through a lot of hard work we've achieved one of our goals," said West Virginia coach Rich Rodriguez, who earned a $75,000 bonus for the league title.

1. Running back by Committee

West Virginia had to replace its all-time leading rusher Avon Cobourne. They did so effectively with a running-back-by-committee arrangement with Quincy Wilson, Kay-Jay Harris and Jason Colson.

Michigan is looking to replace Brandon Minor this fall, their leading rusher the last two seasons, as well as speedster Carlos Brown.  Both were injured on a perpetual basis.  The Wolverines will likely use a similar tactic of inserting interchangeable parts at running back in 2010: Michael Shaw, Fitzgerald Toussaint, Mike Cox, Vincent Smith and Kelvin Grady.

West Virginia had to replace 3 veteran starting lineman on an offense that had just pulverized the opposition in 2002 with a peerless, and almost pass-less option offense. They were successful in back filing these gaps during the season with experienced and quicker players like Lewis, Timmons and Mozes.

The replacement for Moosman will likely be Patrick Omameh and for Ortmann the massive Perry Dorrestein. Other players like Ricky Barnum and Quinton Washington add depth, size and agility as well.  If center Dave Molk makes a full recovery, Michigan's offensive line could be much better than it was in 2009.

West Virginia found a way to replace the entire 2002 defensive line, one of the Mountaineers' best in recent memory, with a mixture of juniors, freshman and sophomores. The new infusion did not have as many sacks, but they kept the play in front of them and were physical enough to rub out any efforts to run against them.

Michigan loses one of it's best defensive ends ever to the NFL in Brandon Graham, but returns the likes of Craig Roh, William Campbell, Ryan Van Bergen, Mike Martin and Greg Banks.  This is an young, experienced and talented group with high upside for the future.  If the linebackers step up their play in 2010, Michigan's run defense should improve dramatically in 2010.

4. Serious Concerns In The Secondary

Rodriguez's third team at West Virginia had a lot of questions about the secondary too. They just lost they're best defensive backs in safety Angel Estrada, as well as the other lock down safety Jermaine Thaxton.  The replacement starting 5 secondary for 2003 consisted of CBs Pacman Jones (so.) and Lance Frazier (sr.), SS Mike Lorello (so.), FS Brian King (Sr.) and Bandit Jahmile Addae (Sr.).  They surrendered hectares of real estate through the air in 2003, but not  a lot of big plays, nor many passing touchdowns (18 over 12 games).

Michigan loses it's best cornerback to graduation in Donovan Warren, but returns just about everybody else including CB Troy Woolfolk, S Jordan Kovacs and S Michael Williams.  The Wolverine coaches bring in the largest recruiting class of secondary players fans in Ann Arbor has ever seen in 2010. There's not much experience here for Michigan, but the talent quotient definitely went up a notch for 2010 when secondary players like Justin Turner, Vlad Emilien, Marvin Robinson, Demar Dorsey and Cullen Christian strap on their winged helmets on game day.

West Virginia struggled it's first 5 games, and it's first decisive win was over a hapless East Carolina team (1-11).   But after the infamous 1-4 start, West Virginia won 7 straight games - 5 of which were against opponents with .500 records. Rutgers (5-7) and Central Florida (3-9) were the only WVU victories where the opponent finished below .500.

Michigan enters the 2010 campaign with a much tougher schedule then they probably would like: Connecticut (8-5 in 2009) in Ann Arbor for the Michigan Stadium Re-Dedication game and a road contest against Brian Kelly's new Notre Dame (6-6 in 2009) team.  Michigan State, Iowa and Wisconsin games are in Ann Arbor, but contests against conference juggernauts Penn State and Ohio State are on the road.  The Wolverines will face 7 teams that went to bowl games in 2009 (though Notre Dame was eligible in 2009 but declined invitation). Five of these seven 2010 Michigan opponents won their 2009 bowl game.  This is a reverse situation of the 2009 season, where Michigan again faced 7 bowl teams, but only 2 of them won their bowl game.