Maize n Brew's Guide to Jackassery: How to be a Creepy Recruiting Troll on the Message Boards

Share All sharing options for: Maize n Brew's Guide to Jackassery: How to be a Creepy Recruiting Troll on the Message Boards

The off-season does strange things to us. We no longer cry over the split second decisions of teenage athletes. We leave that last half inch of bourbon in the bottle when we throw it out and start another (because finishing it would be the sign of a problem). We spend time with our families in our homes rather than at bars with hordes of strangers dressed in similar colors that smell like yesterday's bacon. We eat right, and by that I mean Cheetos are no longer a staple of all three meals. And you know what?

We miss you football season. There's only so much of this "sunlight" and "family" we can stand. If you're reading this, you're probably like us. At least your spouse/significant other/"friend"/Dr. Hanibal Lector who is forcing you to read this is. We need football to carry us through the year, and it's a cruel fate that the season lasts only six months. So what can we do in the interim to keep our sanity?

Many things, my friends. Many things. Over the next few weeks we at Maize n Brew will be rolling out some ideas to help you keep your mental function until the season finaly kicks off in August. Every one of these will pertain to football in some form. Most are probably best performed under the influence of alcohol. Some may will put you on a federal "watch" list of some kind or another. But they'll help you make it through the off season. So with that in mind let's kick off Maize n Brew's Guide to Jackassery.

Chapter One: How to be a Creepy Recruiting Troll on the Message Boards

So, College Football Recruiting You Say?

College Football Recruiting is the life blood of our beloved sport. Without it the game would go back to the days of the University of Chicago winning national championships and Yale and Harvard mattering athletically (they're annoying enough as it is). We have to replenish the players that graduate/leave early/get arrested, and the only way to do that is to promise dumb teenagers all the ass they can handle fame and fortune... er... and the opportunity to obtain great wealth after you leave the NCAA (wink, wink).

How Does This Effect Me?

While everyone knows how important college football recruiting is, no one reputable wants to be involved with it. It's a little dirty. And creepy. Really creepy. Face it, it's following around teenagers and asking them a lot of questions about where they're going later. Creepy. Even so, it involves football and beggars can't be choosers. It also keeps Tom Lemming employed and away from your nonathletic children. Consider the alternative. /shudder/

You mind if I talk privately with your child?

Because everyone wants the steak, but doesn't have a clue where it comes from, that leaves an opening for youto step in and be the provider of that information. People don't want an ecoli porterhouse the same way they don't want some damn two star running back when there's disease free filet or a five star RB available! But how are they going to know what they're getting unless you step in and tell them? You can be important. You can be the great and powerful Oz of your school's football recruiting. You can talk down to people for no apparent reason! What's not to love!?

How Does This Help My Team?

Simple. By going out there are scavenging every last scrap of information on high school football players who could potentially go to your favorite school, you become the informational resource that your school and fan base so desperately needs. Without you, they are lost in the wilderness and you will be there to drag them out of the woods. But perhaps more importantly, you can shout down people with different opinions and insights because their information isn't what you know to be true. If someone suggest that a two star prospect is underrated, hammer them with links and a condescending tone. If someone says "So and So is thinking about School X", tell everyone you knew about it for months and he's only "testing the waters."

By screaming the loudest your Athletic Department is guaranteed to notice you and you will become a valuable resource. Hey, they might even come to relyon you. Who knows what that means? Maybe an invite to a game. A job! A statue in your honor! A moonlit dinner with Linda Cohn! It's all possible! 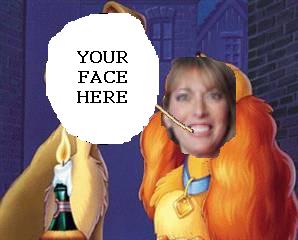 Moonlit Dinner With Linda Cohn? I'm SOLD! What Next?

Now comes the fun part, picking a name for the message boards. It should be something unoriginal, crass, and something of a double entendre (except without the double). Examples include "Johnny Cash Money", "Harry Sac", "Yo Mamma's Boy", "One Night in Paris", "Carrie Underwear", "Tom Lemming", "Spanky McStalknkill", etc....

Got My Screen Name, I went "Helmut VonThunderpenis." Where Do I Go From Here?

Your basic mission over the next few weeks is to spend as much time as humanly possible soaking up recruiting information, not just on your school, but everyone's. You want to know everything about every potential recruit from their forty times to their favorite Muppet. Finding photos of them with guns, money or riding on a Rascal is just an added bonus. You can store those away in case they decide to go elsewhere, then post them all over the interwebz with the caption, "I knew this guy would be trouble. We're better off without him. lol." But we're getting ahead of ourselves.

You have to build credibility within the message board community. An easy way to do this is to recycle posted information but to add the phrase "I saw him at this game/combine/bookstore/place of worship and it's totally true/untrue." You see, you haven't really done anything but repost someone else's work but you get credit for confirming it.

Another way is simply siphoning off someone else's information and reposting it elsewhere. You'll notice that every board has a dominant super nerd... er... information source. The guy whom everyone says "Well, if he says Coach Y bought Player Q a lap dance, then it happened." This dominant information source tends to post regularly and with a lot of info. Follow each super nerd on each different board, and start posting their information as your own on other boards. All of a sudden you're all seeing and all knowing! Reap the rewards of others hard work!

What if Someone Calls Me That?

So what? Just type an angry response in ALL CAPS CALLING THEM COLLIE MOLESTING SPORK HOARDERS AND I KNEW THAT BEFORE HE DID ANYWAY. You see, there's really no way for anyone to check, so you're home free.

Awesome. Tell Me About The Trolling Part.

Well, since you now know everything there is to know about high school football recruits, it's time to put that information to misuse.

Start spreading interwebz rumors about key opposition recruits on their message boards. Obviously, you can't use your real screen name, so you have to pick a new opposition friendly screen name with which to maliciously spread your rumors. Something clever like "LOLverines Suck!", "Alex Boone's Drinking Buddy", "Clayborn Hit Me Once", "Felony Record" (MSU), etc...

By using these aliases, you can escape detection and not only find out what's going on in the imaginary world of message board recruiting, but gain acceptance within the group. Just type the standard "School X sucks! w00t!" email with some innocuous "I saw him play and oh boy" statement regarding a heralded recruit. Once you're in the fold, start posting that High Profile Commit B is considering other schools. Always say Miami (yes, that Miami) is after him and he wants to play where it's warm. Occasionally throw in a Notre Dame trip or an Urban Meyer texty text saying how important Player B is to School Y. This will create confusion among the Luddites on the opposition boards and reveal their deepest insecurities which you can exploit later.

How Does This Help My Team Again?

I'm sorry, what were we talking about?

Getting Through The Football Off Season, Dumbass.

Oh, right. This will get you through the off season because you'll be so subsumed with watching high school football video and reading about potential recruits that you'll forget the real sport isn't being played. It's just like being a Chicago Cubs fan, always getting ready for next year. So not only have you become the sole source for information on recruiting, you know, besides all those professional sites and people who are actually good at it, you have caused chaos for your opponents!

You see!? It works! You get your football fix and ruin someone else's day! Is there anything better? I thought not. Now if you'll excuse us, we have to throw out this almost finished bottle of Beam and get some Cheetos.