The NCAA Tournament Ain't Got Nothin' on Us! Bring on the 2010 Bitter Bowl Bracket!

Share All sharing options for: The NCAA Tournament Ain't Got Nothin' on Us! Bring on the 2010 Bitter Bowl Bracket!

That's right folks, it's time for the real March Madness. The tournament to end all tournaments. None of this wrestling nonsense, because no one cares about wrestling that doesn't involve scantily clad women holding placards or hitting one another. This is a true, no holds barred tournament. Not of champions, but of anti-champions, to determine what BCS school possesses the bitterest fanbase in America. 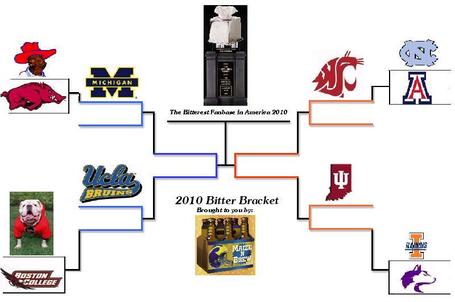 Yeah. That's right. We've got rules the same way you've got billables you'll have to make up as you read this, lawya. But you don't need a law degree to figure this out. It's simple really. Only BCS teams qualify, regardless of regular season or post season performance. Why only BCS teams? Because unless you're in a real conference, you have no right to hope or expectation. You're just along for the ride. Complain all you want, when was the last mid major or mini-conference to win a national championship? Know why? Because we keep it that way. So if you qualify, the second step is showing that your sports following lives as a fans of the Universities in this field suck. Suck hard. We're talking Mega Maid level of suck.

Unimaginable pain is now imaginable, and pretty much common place. High expectations must be met with heart breaking anguish, miserable failure and/or complete team collapse at the moment of truth. If you've got a proud athletic tradition that is now a punch line, bonus points in the seedings. That's how we roll.

None of this Tournament expansion crap here. Besides, 12 teams is about all I have jokes for. Deal with it.

Four byes, four play in games. You're always going to have a No. 1 and everyone else. That's how it is here. So here's who we got.

There aren't enough tears in the combined ocular glands of the Chinese population to cry the river Cougar fans deserve. Since Ryan Leaf left town back in 1998, Cougar football has been a complete non-entity in the PAC 10 and national scene. Their basketball team, Pullman's only real source of hope, crashed and burned this season. Despite reaching the Sweet 16 back in 2007-2008 and the NIT in 2008-2009, it looks like the Cougars are going backward. WSU missed on every golden opportunity it had to make the NCAA's and instead will tip off in the NIT. This further proves that false hope is the worst curse any man can be given. That or saying "Woo! I'm going to WSU!" when you received your postcardletter of acceptance. But who am I kidding? Year in year out, there's no hope. So WSU get's the overall No. 1.

No. 2 Seed- University of Michigan Wolverines

A close No. 2 seed, but a two seed anyway. The Wolverines posted their first back to back losing football seasons at the conclusion of the 2009 season, including dropping rivalry games to MSU and OSU in ugly fashion. The Men's basketball team, despite being ranked #15 in the pre-season polls, finished the year under .500 and lost to OSU on a last second half court three pointer by the national player of the year. Did I mention he took the shot unmolested? The hockey team that hasn't missed the NCAA tournament in 16 years has to win the CCHA tournament just to qualify after a dismal year. Standing in their way? USCHO No. 2 Miami that throttled the Wolverines 5-1 early this season, at Yost. Then there's the pending NCAA football investigation, losing to Appalachian State, the whole Ed Martin thing, watching your rivals suceed at your expense, and so many other fun topics. If not for the sheer hopelessness of WSU, Michigan would've grabbed the top spot. Beat out again.

Up until this past year, bowl games for UCLA really weren't causes for celebration. They were reasons to throw things at your head coach. Personally I think Tennesse fans took their inspiration in nearly burning Lane Kiffin at the stake from the Bruins faithful. The Bruins constant underachievement on the football field can be creditted to Karl Dorrell and his inept coaching staff, which left UCLA's fan base with little hair to pull out. Until this years "triumph" over Temple in the Whogivesacrap Bowl (repeat the first part, "over Temple"), UCLA's last Bowl win was over Northwestern in the Sun Bowl (repeat that again, too). Then look on the harwood. Despite being a national power in men's basketball, UCLA ineplicably deteriorated into a 14-18 team. 14-18! This desptie receiving votes in this season's pre-season polls. Since John Wooden took over in 1948, UCLA had two losing basketball seasons (Steve Lavin's last year and Ben Howland's first). Basically, they were Michigan on the hardwood. After this season, they still are.

NCAA basketball royalty turned endentured servant. Jeeezus have the wheels flown off since Bob Knight was fired. Mike Davis. Run out of town Fail. Kelvin Sampson. Sanctions Super Fail. Tom Crean. Incomplete Fail. Tom is just 16-45 in two seasons at Indiana trying to deal with internal sanctions handed down because of Sampson's misdeeds. Six wins and Ten wins in two seasons. Ouch. Sadly, you'll probably never say that last sentence about the football team. The Hoosiers have been roadkill in the Big Ten joining the conference. Despite some promise, IU isn't anywhere near challenging for a bowl on a consistent basis and lost their heard coach to cancer in 2007. Seriously, cancer? Bitterness is almost as much a guarantee as losing.

We'll take a look at the first round match ups after the jump....

Our southern spectacular. When you think of Arkansas you think of post war football National Championships and Nolan Richardson's forty minutes of hell. Now they've got a basketball team under .500 and the only thing the football team is carrying around is Ryan Mallett's foot (and no, this will never get old).

It ain't pretty in Fayetteville. Lining up against them will be Ole Miss, who now holds the dubious distinction of being the NIT's No. 2 seed. Woo. That's like being the second prettiest girl in the facial deformities ward.  Despite a run in the late 90's and early aughts Ole Miss has only six NCAA tournament appearances to speak of, and a football program that was ranked 4th before ending up in the Cotton Bowl after getting thumped by Mississippi State! Besides that, after generations embracing Col. Reb as their mascot they can't anymore. They have no mascot. It's so bad that their students actually tried to have Admiral Akbar installed as their new mascot. That all by itself indicates a level of bitterness that demands inclusion in this field.

Georgia was the last team in to the field, but they've got plenty of good reasons to be here. The usually successful baseball team is in the toilet, the members of the football team can't stay out of jail, the basketball team.... eck... the basketball team is awful. They even had to break in a new UGA over the past few year. It's been rough in Athens. On the other side of the equation is Boston College, a team that's football coaching carousel defies explanation but whose current mustache makes Magnum PI jealous. Like Georgia, the Eagles found their way into a bowl game this season. Unlike the Dawgs, the Eagles ran up against a vastly more talented but inept USC team which beat them in the fourth quarter. Rubbing salt in the wound BC fumbled away a loss to Notre Dame, a team they've owned over the last few years allowing Notre Dame to claim Jesus is on their side, if just for a year. On the Hardwood, the Eagles sputtered after a promising start to a sub-.500 finish. No matter what happens, unless the eagles bring home the NCAA ice hockey trophy they're going to have to listen to another year of gloating from BU fans. Now THAT will make you bitter.

We'll call this match up the Karma Bowl. Every now and then the most popular kid in class gets busted cheating on exams and dealing meth. This year it happened twice! Two perennial basketball powers, two horrible seasons. No one expected the world out of Arizona, but they were supposed to make the field in a weak PAC 10. On the other hand, UNC was ranked 6th at the start of the season. They lost to College of Charleston on the road, lost to Duke by 32 points, and lost to Virginia by 15 AT HOME. 'Zona wasn't quite the mess that UNC was, but a 17 point loss to San Diego State combined with a mediocre conference performance doomed the 'Cats this season. Frankly the way both teams played this season was shocking. Then you look at two football programs everyone perceived as on the rise, which took dumps in their bowl games.

But let's face it, the reason they're here is because... well... they're here. Missing the NCAA's for two traditional powers like UNC and Arizona is bad news for the fanbase's collective mood. Think about it. UNC had only missed the tournament twice since 1975 before this year. You've got to go back to the bleak days of Matt Doherty to find a season like this. Then there was Arizona's streak of 25 consecutive years making the tournament that went by the wayside this season. Just bring those facts up to either fan base and watch them cry. There's enough bitterness here to make for a great match up.

Win over USC or not, Huskie fans are still groping for answers to 'splain their football program's fall from grace. Ever since Slick Rick Neuheisel was booted out of town for filling out a tournament bracket the Huskies walk in football irrelevance has driven many fans insane. Elite recruits from Washington routinely leave the state. They hried Tyrone Willingham. Hell, they even had a winless season in 2008. The Huskies lose some seeding points because their team made the NCAA tournament this year after winning a diluted PAC10 tournament, the only team in the Bitter Bracket to make the NCAAs. That's something their first round match up can't say. The Illini coughed up a NCAA tournament invite when they lost in double overtime to Ohio State. Speaking of post seasons, the Illini haven't seen to many of them on the gridiron recently. After a "lightning in a bottle" run to the Rose Bowl, the Illini are quickly gliding back to the football irrelevance they have claimed for generations. Somehow Ron Zook's ineptitude has not convinced the Illinois AD's office that he should no longer be coaching. That all by itself will make any college fan bitter. Throw in a blown NCAA tourney bid, and you've got a gloriously bitter first round match up.

So That's The Line Up?