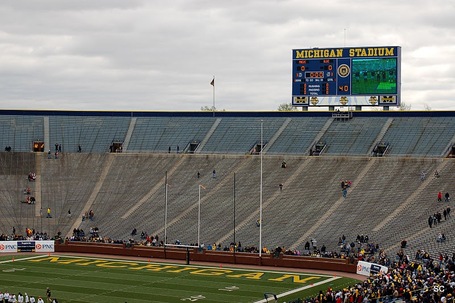 Despite temperatures around the Midwest that were in the 80's earlier in the week, it appears that the Football Gods felt it best for Michigan to have late October/Big Ten weather to practice in on Saturday for the annual Spring Game.  Perhaps that's fitting, welcome to Ann Arbor indeed recruits!  The weather not-withstanding, it was a fun day on Saturday and a chance to see an oasis of Michigan football in an otherwise unendingly long offseason was much appreciated.  It's always tricky trying to analyze much from one isolated practice, and more often than not certain things get way overblown or underplayed...  what follows will be an attempt to keep those to issues in check, I'll also throw in a photo gallery at the end (we'll see how well that works).  I'm going to break this into two parts, so today we'll talk about the offense, because if I'm honest, I spent a lot more time paying attention to that rather than trying to figure out what sort of formations and coverages the defense was using (sneak peak for tomorrow on the D: woo Roh, woo RVB, woo Demens, and yeek coverage on the deep seems) 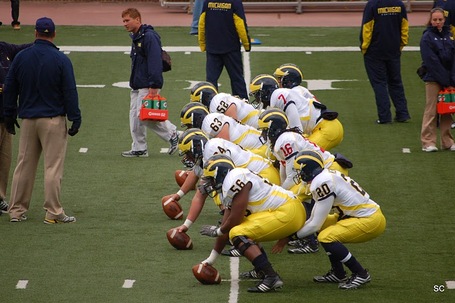 QBs - I'll admit to entering the day still somewhat skeptical of much of the spring hype surrounding Denard Robinson, and I left without a doubt that he is a legitimate contender for the starting QB spot if not the leader at this point in the spring.  The only caveat to his performance yesterday is that while Denard played with the first team, that group went against the second team D most of the time.  This was the reverse of Tate, who played against the first team D.  That said, things like "accuracy" and "throwing mechanics" which I would define as rather independent of defenders were, quite simply, leaps and bounds from where he was at any point in the season last year.  His 97 yard TD to Roundtree was quite simply a gorgeous throw that was dead on the money; think Henne to Manningham against ND in '06 and you have a pretty good idea of how well he threw that ball.  My only quibbles with Denard's performance were his accuracy on some of the short out throws.  He occasionally will aim the ball instead of simply firing it to the receiver.  Brian over at mgo called him a "running QB with rudimentary passing skills" which the prototype would have to be Pat White... I respectfully disagree, Robinson showcased a throwing ability that Pat White never had at WVU.  He's not Henne or Navarre obviously, but Robinson throws a solid ball with zip and at least on this particular Saturday, was more accurate than I would've imagined he could be after last season.  He looked like a QB yesterday, not just an athlete. 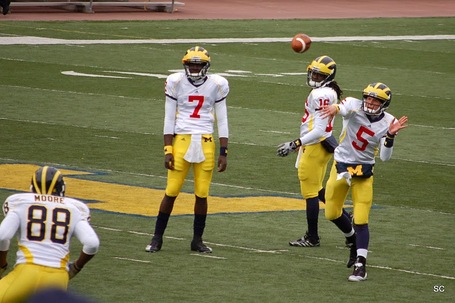 On the topic of accuracy, during drills and in the scrimmage I'd say Forcier was the most accurate passer of the group.  Again keeping in mind that Tate played with the two's against the one's, I would say it was more difficult to judge just what he's improved on since last Fall.  I was really hoping to see both QBs run more of the zone-read just to see how their ability to make the read has progressed, but that was pretty limited yesterday.  Otherwise, Forcier's performance was pretty similar to what you'd expect.  Some great throws mixed in with a few plays that reminded us of the "scramble around holding the ball in one hand dangerously" stuff that cost us a few times last year.  He also made a few throws that were, um, unadvised.  He was nearly picked off on an intermediate throw that ended up somehow landing in the receiver's hands, and on several other occasions threw a ball into tight coverage.  Of course the flip-side to that is that he's the only QB on the team who can make the TD throw to the back of the endzone splitting two defenders like he did late in the scrimmage.  I would've liked to have seen Tate and Denard each get a few drives with the one's against the one's just for the sake of comparison.

I'll cut to the chase on Devin Gardner, it is apparent why he was so highly touted, but I think the young man needs to redshirt this season.  With both Tate and Denard as viable starting options, there's not a situation I can see outside of injury where it'd be a good idea to use a year of his eligibility.  In somewhat apropos fashion, his first snap within the confines of Michigan Stadium was a fumble followed by a yakety-sax amount of hustle to knock the ball out of bounds.  He did, however, showcase a throwing ability that Denard did not have last year... two in particular stood out to me: the first was a strike down the middle to one of the TE's (who made a great catch), the throw was in and of itself impressive, but I was caught more by the read and the speed of the delivery.  The second was a nice deep ball to a wide open Odoms, who unfortunately dropped it in a manner that would remind many of an IM game on any college campus. 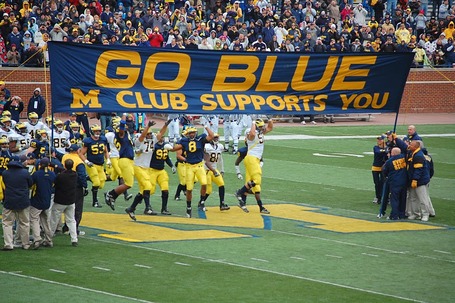 RBs -  I'm almost happy to report that nobody won the annual Carlos Brown Enormous Run That Results In Endless Hype award this year.  To put it simply, I was most impressed with Michael Cox and Stephen Hopkins.  Cox is the most prototypical "old-school" Michigan back on the team, and he demonstrated some of that ability on a great 22 yd TD run during the scrimmage.  Hopkins managed to deliver a few of the battering ram runs that we've been hearing about from practice reports and in general looked like an another solid option. 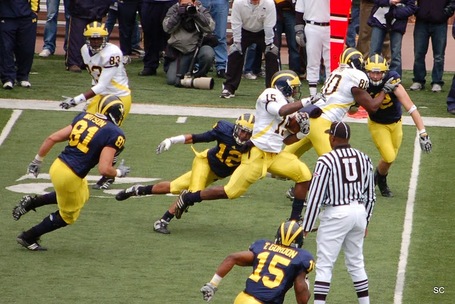 It was difficult to say much about Fitzgerald Touissant or Mike Shaw from what we saw yesterday, neither looked spectacular and neither did anything to cause me to say "doh".  The one uplifting thing I can mention was that Vincent Smith was out on the field hopping all over the place and generally looking pretty good for a guy with an ACL repair from late November.  Currently, my guess is that it's going to be Smith and Cox rotating as the starter with a platoon approach throughout the season until someone separates themselves. 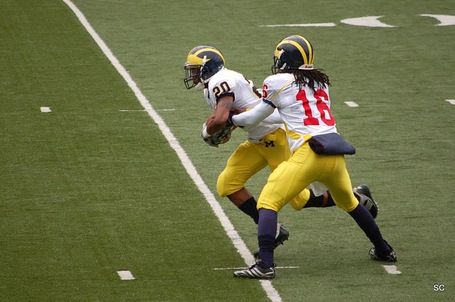 Welp, Roy Roundtree went ahead and decided that maybe this time, he'd get into the endzone (arg... just arggggg)...  I still would like to see him maybe zig a little bit on something like this: 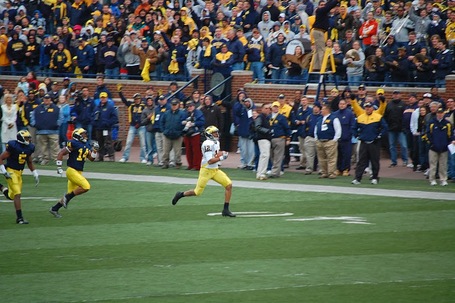 It looked like a sure thing at this point, it got much closer towards the goal line... Photo by David Childers

Roundtree looked really solid overall and had a number of nice catches throughout the day.  Given the MASH unit appearance of the current WR corps, it's hard to draw a lot of conclusions, but he has certainly continued with the form that saw him breakout late in the season last year.  Martavious Odoms also, aside from the blatant drop, had a nice day and continues to be one of those guys on the team that just plays his tail off every down.  The slot position will be a position of strength this season.  The guy that I am most irrationally excited about is by far Jeremy Gallon, who for all the world looks like he could be a threat to break a big play every time he touches the ball.  Again, I don't have a plethora of supporting evidence for this excitement, the guy just gives that impression on the field.  I would've liked to have seen him return a punt, but unfortunately outside of Tate Forcier we don't have a punter that is capable of getting him a ball at this time. 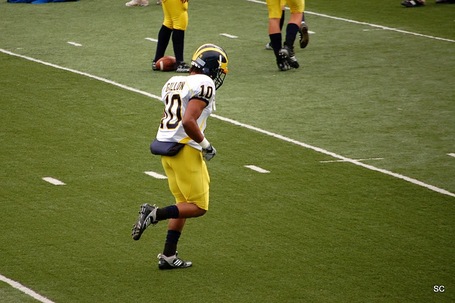 The TEs didn't feature much in the action yesterday, there were a few sets that saw Koger set-up like a fullback in the backfield and pull for blocks, but otherwise a few looks and a few nice catches were about all we saw.  Martell Webb did hold on to the ball after a nice hit from Cameron Gordon. 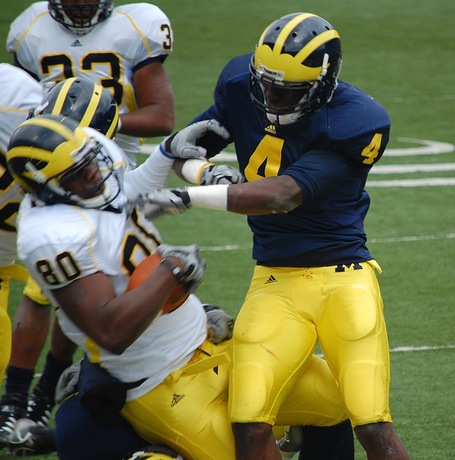 Offensive Line - I am, by no means, a great evaluator of offensive line play, but from my somewhat plebian view on such things, Taylor Lewan and Patrick Omameh impressed and saw a LOT of action yesterday.  Omameh in particular had a fantastic pancake block early in the scrimmage.  Otherwise, just think healing thoughts... 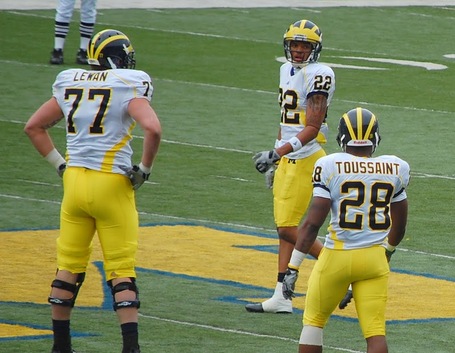 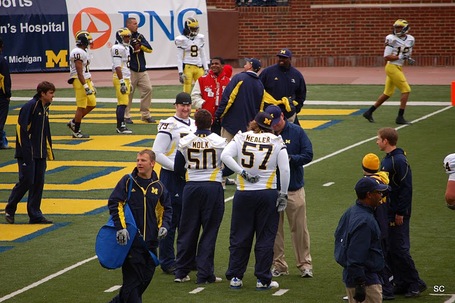 One mild surprise, and one eye-gouging issue...  We'll start with the good: FG kicking.  I, and pretty much everyone else in attendance, was pleasantly surprised by our FG kicking.  Brendan Gibbons hit a 47 yarder during the kicking drills and generally was solid all day.  Also a pleasant surprise was soccer star Justin Meram, who was accurate all day without quite the distance that Gibbons displayed.  Also coming in for praise with some solid kicks was Kris Pauloski.  Given that I was expecting a horror show here, I was thrilled with how each of these guys looked yesterday.

Unfortunately we weren't spared the horror show, it simply waited until it was time to punt... I'm just going to say this:Tate Forcier is currently the best punter on the team.  He hit a 55 yard "pooch" punt yesterday that was about the only true punt we saw all day.  Will Hagerup is your starter and he's not even on campus.

More pics - Here's a slideshow (hopefully) of some of the photos from yesterday's practice: