10 Things the Big Ten Should Do Before it Expands

Share All sharing options for: 10 Things the Big Ten Should Do Before it Expands

With all the talk of Big Ten expansion, numerous, cancerous issues within the Big Ten that need to be addressed are being swept under the rug. Ignored as the Big Ten chases the all-mighty dollar. Well I'm not going to stand for it anymore. There are issues that will tear this conference apart if we don't do something about them now. So, as a courtesy to the league, I've looked at 10 Conference Crippling issues and and provided you with their solutions. Yes, yes. You're welcome. Enjoy.

Solution: Put Ed Hightower on a One-way Rocket to the Sun 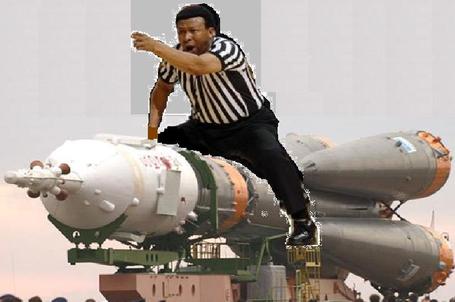 This should be the first issue of discussion at any Big Ten meeting. Ed Hightower is not just a scurge on Big Ten basketball, but sports as a whole. In one sense he is a pioneer; changing the game from being about the players to about the referees. He has drawn our attention to people who should basically be invisible. He must be stopped. The solution? Stick his ass in an Atlas V and shoot him into space, preferably toward the nearest quasar. Russia's hurting for cash, so maybe the Big Ten could use five or six bucks from that wad of BTN change and duct tape Hightower to a Soyuz bound for Andromeda. It's win-win. Russia gets much needed cash to bebuild their crumbling post-communist infrastructure and the quality of Big Ten officiating improves ten fold. Make this happen Mr. Delany.

Solution: Add Hockey as a Big Ten Sport - This is a no-brainer. There are sufficient schools in the Big Ten to make this a legitimate, separate hockey conference, yet we must split our teams into two separate conferences with no affiliation to the Big Ten. Wisconsin, Michigan, Minnesota, Ohio State, and Michigan State would form the backbone of the nacent hockey portion of the conference. Then promote Penn State, Indiana and Illinois' club teams to varisty status, and you've got yourself a legit conference title. If need be, extend provisional inclusion to some current CCHA or WCHA members on a hockey only basis just to round out the numbers. Obviously, if Notre Dame is sucked up by the Big Ten's Mega Maid style expansion, then we're golden (hur hur). But for now, this could sort of work. Sort of.

Issue No. 3 - What Can We Do to Increase Ratings for Conference Games?

Screw the coin toss to determine who receives the football, have the mascots duke it out to determine who gets the ball first. Bucky v. Purdue Pete. Hawkey v. Goldie. Com'on. It'll be awesome, and it'll favor Michigan more than you can possibly imagine. Instead of some lame weasel suit, we get a live wolverine like they had back in the '20s. We'll see how the Northwestern football team reacts on the field after they step in a pool of Willie the Wildcat's blood just as they look up to see him being eaten before their very eyes. Caveat, LSU is excluded from this. As is Baylor. Tigers and Bears simply win by default.

Unless they play each other.... Can expansion include them, plz?

This man is about to die

Issue No. 4 - Damn, These Coaches are BORING

Granted this could fall under Mascot Cage Matches, but it's just barley different enough to warrant its own bullet. The Big Ten needs Urban Meyer. Not because of the National Championships or anything like that, his personality would be a welcome addition to the Big Ten. "How," you ask? The guy's a dick. An egotistical d-bag. He has no filter. He treats the media like pond scum. He whines and cries when he doesn't get his way. He's always causing problems.

In a conference full of people who say absolutely nothing, wouldn't it be great to have someone who actually says anything? Think about it. Tressel, Ferentz, Beileima, Rodriguez, Dantonio, etc... The only guy that says anything in this god foresaken quote wasteland is Joe Paterno, and he only gets away with it because he's Jim Delany's great grandfather. There's never any controversy about what a coach said at practice to a reporter. There's never an outcry about the a reporter getting physically threatened for reporting what was actually said by a player. It'd be like having a real life Nikita Kruschev in the conference instead of the UN. The entertainment value would be out of this world. The perfect fit would be at Indiana. He's like the football Bobby Knight, except without the redeeming qualities of personality and standards of conduct. We must have him.

(Six more solutions to Big Ten Problems after the Jump.......)

Issue No. 5 - We Need Something Besides Expansion to Talk About

Solution: Find new and more exciting ways to screw with the Big East

If there's been one true positive about all this expansion talk, it's been the venereal degradation of the Big East. At this point, the majority of Americas outside the East Coast believe that Big East Football is nothing more than a bunch amputees on Rascals playing in a 7-7 league. But now that we accomplished that, there's so much more we can do to them. Start dropping rumors that Louisville wants to return to CUSA. Maybe that all of Rutgers' athletic funding was ted up in Bernie Madoff's ponzi scheme and they just haven't told anyone yet. That no one in New York actually watches the Big East.

The Big East has become college sports whipping boy. And after three years of it being the Big Ten, I'm happy to dish it out for once.

Issue No. 6 - We Need to Show We're More Competitive For BCS Purposes

This has to happen. If there are any dicussions about improving the quality of football in the Big Ten those discussions should focus on requiring Big Ten teams to schedule an OOC heavy hitter not named Notre Dame. When the Domers are back in the national polls again consistently, then I'll retract this, but right now OOC scheduling in the conference is a joke. Only OSU and Minnesota get any kind of pass on this based on their tougher than average big name opponents on the schedule. What this all comes down to is I still want a home and home with Georgia.

Issue No. 7 - The Big Ten is Kinda Boring and White

Issue No. 8 - Man, This is Killing My Buzz and We're Losing Money on It Too!

Solution: Allow beer in the stadiums

The outright hypocrasy of this policy still galls me. Hey everyone, get loaded in the parking lots but doooooon't expect to be loaded at the game! Besides, think of the revenue stream you're passing up. Beer sales in Iowa, Wisconsin and Minnesota alone would triple Big Ten revenues. I know you want to say Columbus, but if it doesn't say "ICE" after the beer name, they're not drinking it. The conference chucks drunks out of games all the time anyway, so what's a few more? Maybe having the beer in the stadium might encourage people outside to drink less before they go to the game. Right? No. Never mind. This is a stupid, dangerous suggestion. No matter how awesome it might be.

Solution: Sign the MAC to a minor league deal

This is really what the Big Ten needs more than anything. A minor leagues. Someone gets hurt? Call up a replacement. Every team in the Conference would get a specific MAC affiliate. Starting center goes down? No problem! Joe from Toledo's been starting all season. Makes more sense than the MAC being an actual conference doesn't it?

Solution: If we have to talk expansion, lets discuss European expansion

Fine, you want to expand? You have to expand? Let's talk Europe then. Specifically beer drinking Europe. Were we to include Germany, Ireland and the Czech Republic with Wisconsin we've got the four largest beer producing/consuming countries in the world in the conference. Hell, we can even throw in Holland or Belgium for good measure. You can't tell me the alumni wouldn't turn out for the Michgan v. Amsterdam hasheesh grudge match every two years (no matter what it'll be an unbalanced schedule). Iowa v. Munich, Ohio State v. MSU (yeah... neither of them would be allowed to travel abroad for dipolmatic reasons), Penn State v. Prague. It'd be spectacular. No more of this East Coast expansion nonsense, let's make it serious!

My money's on Munich in this particular Beerfest.