The Anatomy of a Poor Decision: Donovan Warren and the NFL Draft

Share All sharing options for: The Anatomy of a Poor Decision: Donovan Warren and the NFL Draft 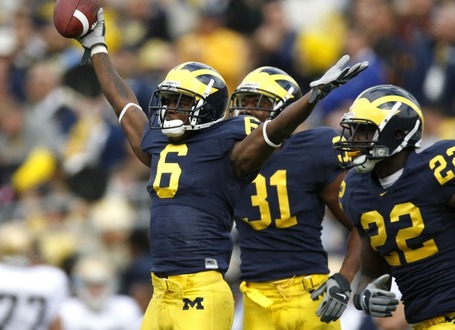 I'll get this out of the way at the outset: I disagreed with Donovan Warren's decision to leave early when he announced in December, it didn't make much sense then, and given the results of the draft it makes less sense now.  This is not so much an attempt to pile on as it is an attempt to emphasize what made it a poor decision in the first place.  Some will call it Monday Morning Quarterbacking, and you'd be right, but the analysis of decisions like this are the byproduct of making those decisions in the first place.  I hold no ill-will towards Warren and I begrudge him nothing, I hope he finds success in the NFL. When we profiled Donovan Warren's NFL Draft prospects back in March, we had hig hopes he would be drafted in a respectable position, though we knew there was a pretty good chance it wouldn't go that way.  I just wish he had taken the time to fully evaluate his options and stock before making the leap.

If you've paid attention at all after the most recent season of Michigan football ended, you're aware of the fact that one of the strongest/most talented players on the defense and certainly the secondary, Donovan Warren, decided to enter the NFL draft a year early.  It's probably fair to say that at no point in time was Donovan Warren considered a lock to be a first round draft pick, though there were evaluations that had him as a possible 2nd or 3rd rounder.  It's always tricky when a player declares early for the draft when his draft status is uncertain, and I won't pretend to know or be privy to all of the factors that weighed into Donovan's decision, but now that the results have come in, I think it's fair to classify the decision as unwise.  This of course was compounded by the fact that he signed an agent, eliminating any small chance he might have had to further evaluate his draft stock and make a decision at that point.  This is particularly tedious to Michigan fans because we have a very similar example to point to from the not-too-distant past, from the secondary no less. 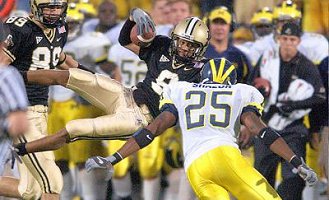 We've seen this before... Photo via www.mikedesimone.com

This is not a knock on Warren's ability as a football player, not at all, but rather a commentary on a decision that nearly everyone else who looked at it said, "um... really?".  There were a number of issues playing into the lack of interest in Donovan as a early round pick.  Chief among them is that he has played dinged up for each of the last two seasons on a football team that, quite simply, hasn't been very good.  He's had relatively few chances to showcase his talent over the last two years.  When he declared for the draft back in December, he chose to do so without waiting for his draft evaluation to return.  Couple this with what can only be described as an underwhelming combine performance weighing into the equation, and things started looking grim.  How grim?  Here are the corners/safeties that were taken over Donovan in the 6th and 7th rounds of this year's NFL Draft:

13 secondary guys taken in the last two rounds of the draft, you'll gaze through many of those names and go "wait, who??" quite a few times.  The guy who was the Big Ten Defensive Freshman of The Year, Second Team Freshman All-America, and 2009 All-Big Ten first team was not among them.  It's selfish, expected, and obvious for me to say that Donovan should have stayed.  There's no question it would've benefited the team (the team, the team), but I also think there's a better-than-good chance that it would've paid-off (literally and figuratively) for Donovan Warren.  He would've been the featured defensive back on this defense again, he would've been a senior leader on a team that is largely devoid of such leadership, particularly on the defense.  And he would've finally had a tiny amount of consistency in his defensive coaching staff for the first time in his career in Ann Arbor.

Now then, a couple of caveats that I believe probably weighed in here:

Those aren't invalid reasons, and Lord knows how many more played into this whole situation, but one has to wonder how much Donovan will be thinking "what could've been" over the next several years.  I know Michigan fans will certainly be wondering the same thing as we head into the fall.  We've seen this before with Ernest Shazor, a guy who left little doubt to his ability on the football field but by all accounts left a year too soon.  The roadmap was there for Donovan to follow and he chose to ignore it.  That's what is particularly frustrating to me at this time.  It doesn't appear at any point that he received poor information regarding his status in the draft, and yet he ignored all of the warning signs and lessons learned by those who've gone before him in making his choice.  It's not a choice we should hold against him, but rather one that is simply disappointing both for the individual and his former team.  I hope that he, like Ernest Shazor, can serve to be an example to those who follow him.  At the time of writing this, it looks like the New York Jets have signed Donovan as an undrafted free-agent.  Within that article, he states the following:

"Ready to get there and prove everybody wrong" - Donovan Warren

I certainly hope he's able to do so.