Share All sharing options for: California, Shoelaces and Opportunities

Every fan has a player they latch onto as their player. Their guy. The player they support through just about everything, so long as he remains in a Michigan uniform and manages to stay out of handcuffs. There is rarely a consistent reason for it. Everyone has their own prerequisites for picking their guy. Some people saw Stevie Brown as a freshman and clung to him, through thick and thin, and were rewarded with a stellar 2009 campaign. Maybe others saw Martavious Odoms as their guy after his fast start, or they picked Vincent Smith when they saw him spring off of would-be tacklers like a superball in a trampoline factory on you tube. Everybody's got their guy.

The only Michigan player I can think of that was universally my guy was Mike Hart. If you're looking for someone who didn't immediately jump on his bandwagon after his first downs in 2004, well, it's going to be a while before you stop. There was something about Hart that immediately made Michigan fans fall in love with the kid. Maybe it was his baby face or his improbable escapability. Maybe it appeared that he was the ultimate underdog; not the fastest guy, not the five star, but a kid that almost no one recruited who turned himself into an All American on sheer determination and will power. Who knows. If you ask a thousand people you'll get a thousand answers as to why Mike Hart was their guy. 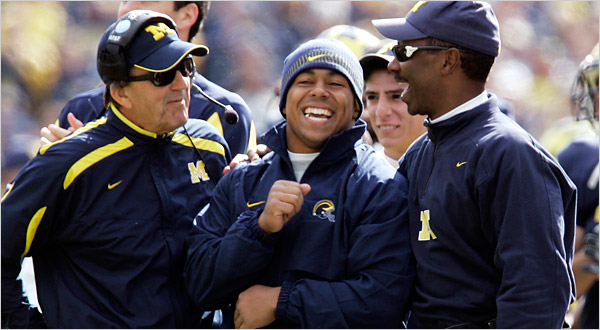 But picking my guy is not without it's drawbacks and personal disappointments. No matter how much excitement Mario Manningham gave us, there was always something holding him back. The time in Lloyd's doghouse, the spate of injuries, his decision to leave early. Or there was Steve Breaston and his inexplicable athleticism, million dollar smile, game changing abilities, but maddening inconsistency and inability to blossom into the receiver he could've been in college. Pick a Michigan quarterback or safety and you'll say similar things: Capable of changing the game every play, but you were never sure which way.

Regardless, we stick with these players. Sometimes for no other reason than we've done it for the last year, two years, three years. They're our guy, dammit, and we'll support them irrespective of their successes, failures, and occasional run in with the law or their coach. It's just the way Michigan fans operate.

On the present Michigan team, there isn't a universally accepted my guy like there was with that 2004-2007 group. The closest player to that description seems to be Tate Forcier. Perhaps 125 pounds soaking wet, 6 foot nothing, and grinning ear to ear in spite of it all. Just on size and melanin, Tate seems like an underdog. He too short, he's prone to getting banged up, he's quick but often not quick enough, he's got a good but not a great arm. Yet he succeeds in spite of all this. As a freshman he led Michigan out of the wilderness to a 4-0 start including a come from behind win over rival Notre Dame. Maybe he was the second coming of Mike Hart, the little guy that would. The signal caller with the juke step and the perma-grin.

But like Hart, this is damming praise. Tate is not an underdog. Far from it. Tate was a polished high school quarterback, groomed (seemingly from birth) to be a quarterback. Both older brothers were college QBs. He studied the science of quarterbacking the way many people study cancer, long before he came to Michigan. He's the most athletic starting quarterback Michigan's had on campus since Rick Leach was rolling out behind the guard and tackle. With all that, Tate's not an underdog, but damn is he fun to watch. And as a result, many fans took Tate under their wing as their guy. The guy that would lead Michigan, and would be their guy through thick and thin.

I understand and appreciate that. As I said, Tate is as universal a my guy as you can get with this young team. He's personable. He's athletic. He's a leader. He's got that surfer boy quality to him that makes his demeanor and athleticism seems so natural, so casual. It's hard not to like the kid. And until he graduates or goes on to bigger and better things, he will likely stay everyone's guy. That is the benefit of being the young quarterback.

But lost in all this is Denard Robinson. Shoelaces. Light speed in cleats. Even with my unquestioned devotion to just about every player on this team, Denard has always been my guy.

Just as there's the "it" factor for Tate, there is the "good lord!" factor for Denard. He's like a lightning storm in pads. A bundle of electricity waiting for the right conditions to tear a path across the football field. Despite his four star pedigree, I look at Denard as the same kind of underdog that I saw in Mike Hart. No one wanted Denard as a quarterback. Frankly, no one was sure where to play him on the football field during his recruitment. He was slated as a corner, a receiver, even a running back, even though his 6 foot nothing frame was not and is not built for the punishment those positions would entail.

He was never listed as a quarterback. Never. It didn't matter that when the ball was in his hands under center he was down right unstoppable. It didn't matter that he had a cannon for an arm. He wasn't supposed to be a quarterback. His high school completion rate was too low. He didn't have enough film showing he could throw the intermediate and short routes. He was a runner first and second, thrower third. Everyone doubted his ability to be under center and he was given the ignomious "Athlete" tag.

Yet Denard never wavered on his desire to compete and to play quarterback. When he signed with Michigan, he signed to be a quarterback. Despite the fact he did not enroll early and despite the fact he'd never had legitimate coaching of his throwing motion, he quickly surpassed the previous year's starter to become the back-up to Tate Forcier as a freshman. He did this in a month of practice time.

Then, against Western Michigan, we saw a small glimpse of what he is capable of. Despite fumbling his first college snap Robinson deftly scooped the ball off the turf and into his arms, then exploded through the right side of the line for a 43 yard touchdown run. Not bad for your first college play. Unfortunately, the rest of Denard's season didn't live up to his first snap. Denard finished the season 14-31 with four interceptions. By the end of the year, the coaching staff had basically designated him as a run only quarterback. So much for a promising beginning. Right?

Not really. Denard never had the early snaps that Tate enjoyed during spring practice. He never had the personalized coaching outside of school his friend did. It became readily apparent that the only quarterback coaching Denard had was in that first month of spring practice and the subsequent months following. That's one hell of a distant starting block for anyone.

Yet there he was. Competing. And there he is today, pushing his friend for the starting quarterback position. There's something inside of him that won't let him settle for what others see him as or want him to be. He wants to be Michigan's starting quarterback. And he wants to earn that right by being the best player at that position. When told he'd see time at receiver he got even better at quarterback.

That's what I love about Denard and what makes him my guy. He is unafraid of challenges and driven to create his own opportunities. He will either supplant his friend at quarterback or will push him to be better than he is. There is no give in Denard's game. There is only determination to be better. He will make himself and his teammates better because of it.

So when you see California and Shoelaces smiling and throwing the football remember that each is the guy for different reasons. They will make their own opportunities and make each other better. And as they do so, they will make every Michigan fan proud that they call them their guys.